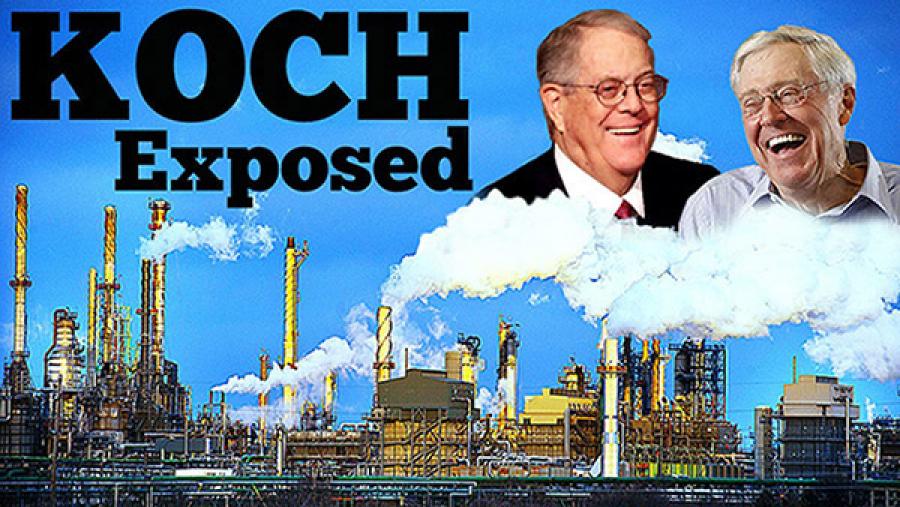 But the result is no joke. These folks are not your run-of-the-mill billionaires, they are billionaires advancing a business model "that has declared war on life," suggests author Naomi Klein.

With seven new seats in the U.S. Senate and 12 in the House, with four new Republican governors and a significant number of wins in state houses across the country, the Kochs are on a roll.

"The Kochs are our homegrown oligarchs; they've cornered the market on Republican politics and are nakedly attempting to buy Congress and the White House," Tim Dickinson recently wrote in Rolling Stone.

But every win for the billionaire industrialists is a setback for people and the planet. That is because their fortune and their agenda is fueled by refineries, pipelines, and petcoke. "Burn, baby, burn" isn't a cute slogan for David and Charles -- it's their reason for being.

As the planet cooks at an accelerating rate, the stakes have never been higher.

The Koch's Americans for Prosperity, a nonprofit dark money group that does not disclose its donors, is reported to have spent some $77 million on competitive Senate and House races, says a spokesman. The Koch's new Freedom Partners Action Fund, a super PAC that discloses some of its donors, spent some $25 million. Not all Koch candidates won their races, but the Kochs were ranked big winners in the Sunlight Foundation's post-election "return on investment" analysis.

This $100 million does not count all the Koch-tied groups, their personal contributions or all contributions of the Koch network of funders which may top the $300 million Washington Post estimate. As a point of comparison, the DNC and the RNC combined spent $300 million this election cycle.

Koch bucks purchased over 44,000 TV ads (and that was an early count). Americans for Prosperity told Floridians that Charlie Christ was for renewable energy (gasp!), not because it created jobs, reduced pollution and protected the beautiful Florida environment, but because Christ wanted to hike people's utility bills.

And the Kochs purchased a ground game that puts the Chicago machine to shame. "In many places, [AFP] has more trained and paid operatives than the traditional political parties have. Nowhere is this more obvious than Florida, where the group has 10 offices, its single largest field operation," reports Salon.

In the hotly contested North Carolina Senate race between Kay Hagan and ALEC stalwart Thom Tillis, AFP "had 45 paid staffers who knocked on 186,000 doors and made at least 1 million phone calls," says the Washington Post.

The Kochs are not your average oligarchs, they are a political party.

The Koch Party platform was not determined at any founding convention by a vote of average Americans. It was drafted behind closed doors at the American Legislative Exchange Council (ALEC) by some of the world's most powerful lobbyists representing Exxon Mobil, Peabody Energy, and other major polluters.

The platform is straightforward: in the name of "free enterprise," starve the state and burn the planet.

On the economy: Brace yourself for a doubling down on job-killing austerity and tax cuts, attacks on public workers, pensions and wages, the outright banning of local efforts to raise the wage or secure paid sick leave protections for workers, as well as cruel and sustained attacks on the poor, the sick, and the elderly. (ALEC is on record for having supported the privatization of Social Security and Medicare.) The weaker and more despised the government is, you see, the better it is for polluters.

On the climate: With heavily polluting industries driving ALEC's agenda, the group has been an aggressive opponent of any efforts to address climate change. ALEC polluters have called for a "political tsunami" and "guerrilla warfare" to oppose the Environmental Protection Agency's plans to reduce polluting emissions from coal fired power plants. ALEC has passed countless resolutions in an effort to undermine the EPA, has slammed the "make polluters pay" carbon tax, worked to repeal or weaken state renewable portfolio standards, raise taxes on solar power and takes its legislators on tours of the Canadian tar sands (we call this ALEC's Keystone Academy). They are even organizing Republican state attorneys general to sue the EPA over the emissions standards.

This reactionary agenda forced Google to recently denounce ALEC for its "literally lying" about climate change and drop out. Facebook, Yahoo, Yelp and now ALEC board chair SAP America have joined the stampede. To date, over 90 major American firms with some regard for their reputation have dropped their funding of the organization, leaving behind bottom feeders like big pharma and big tobacco.

The Kochs are on the list of America's 100 most toxic polluters, according to the Political Economy Research Institute (PERI) at UMass-Amherst. And they just can't wait to do more damage. As the largest foreign lease holder of the Canadian tar sands, the plan is to move the dirty tar sands oil to the Gulf of Mexico, polluting to refine it and ship it overseas to pollute some more.

The Koch Congress is on the case. The day after the election, Senate Leader Mitch McConnell said that passing the KXL Pipeline and rolling back EPA limits on polluting emissions from coal fired power plans are two of his top priorities.

While the Koch Congress plans to force Obama to approve the KXL pipeline, former NASA scientist Jim Hanson says burning the tar sands is "game over for the climate."

While Koch candidates chatter on about creating "tens of thousands of new jobs" with the pipeline, a Cornell study puts construction jobs at 2,500 to 4,650 with 126 permanent jobs when the pipeline was completed.

While the Kochs and ALEC stalwart Grover Norquist want to shrink government so it can be drowned in a bathtub, exactly the opposite is needed right now. A massive investment "in the bones of our state" is required to deal with the heavy weather we have already locked in as well as to reverse course, says Klein.

The same week that Tim Phillips, the head of Americans for Prosperity, is giddily taking credit for having ushered in "a once-in-a-generation renaissance for economic freedom policies" and ALEC is celebrating an "historic victory for limited government, free markets and federalism," United Nations scientists released a report warning in the starkest terms that concerted and massive action must be taken by nations to stop runaway climate change. The short term goal? A 40% reduction in emissions in the next few decades. In the longer term, we need to get to near zero carbon dioxide emissions by the end of the century.

Failure to reduce emissions "could threaten society with food shortages, refugee crises, the flooding of major cities and entire island nations, mass extinction of plants and animals, and a climate so drastically altered it might become dangerous for people to work or play outside during the hottest times of the year," says the latest United Nations report.

In her new book, This Changes Everything: Capitalism vs. The Climate, Naomi Klein argues that climate change is not just a disaster "it is our best chance to build a better world." If the Kochs and their ilk are embodiments of "disaster capitalism," what is needed she says is "disaster collectivism."

Collective action will take many forms. Klein herself is a big fan of 350.org the climate action organization that is leading the charge on divestment from fossil fuels.

While divestment is key, investment is also critical. In a major new paper that took four years to complete, economist Robert Pollin at PERI lays out a serious private-public investment agenda that can get the United States to a 40% reduction in emissions in 20 years. Serious investment in energy efficiency and low cost clean renewable energy sources will not only lower toxic emissions, it will also generate a whopping 2.7 million new jobs even after accounting for job loss in the fossil fuel industry -- millions more than are promised by the KXL Pipeline. With a level of investment of about 1.2 % of GDP Pollin says, in 20 years America could be at the level of emissions Germany has now.

"It is not hard to reduce emissions when you look at it analytically, it is getting the politics right that is the real problem," Pollin says wryly.

His program will be a hard sell in the new Koch Congress, but the vision of saving the planet by creating millions of jobs is a winning platform.

Learn more about the KXL Pipeline proposal at Pipeliesexposed.org.

I was hoping it was more than another Left wing partisan platitude party masquerading as objective. Sigh. Back to zerohedge, global research, and consortiumnews!