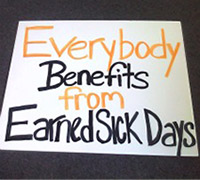 A tactic used by the American Legislative Exchange Council (ALEC) to evade state public records laws has popped up in Florida, prompting a lawsuit against the Orange County mayor for allegedly using an internet dropbox to dodge transparency surrounding the county's latest effort to thwart paid sick day legislation.

Organize Now, with assistance from the Florida First Amendment Foundation, filed a lawsuit last month against Orange County Mayor Teresa Jacobs, alleging her office has used the cloud-based file sharing service Dropbox to undermine the Sunshine State's sunshine laws. Organize Now's Executive Director Stephanie Porta suspects that Mayor Jacobs not only deleted public records, but also may have given non-county employees -- like lobbyists -- access to files that were kept hidden from the public.

The increasing use of technology like Dropbox pose new issues for open government.

"Advances in technology should make access to public records easier and cheaper," said First Amendment Foundation president Barbara Peterson. "Instead, technologies such as Dropbox are being used to shield and obstruct access to basic government information. We believe this lawsuit will have statewide implications for how governments utilize this new technology."

Organize Now's lawsuit arose after the mayor's office claimed to have almost no records pertaining to three major ballot measures the county was pushing, including one that would specifically prohibit citizen efforts to enact paid sick days or minimum wage increases -- measures that Organize Now successfully promoted last year. Another would change certain elected offices to nonpartisan positions and move their elections to August rather than November which -- for the same reason that Ferguson, Missouri's local government is so unrepresentative -- would lead to lower turnout and likely benefit Republicans in the largely Democratic county, Porta says.

"Laws don't come out of nowhere," Porta told the Center for Media and Democracy, yet in response to Organize Now's records request, the county claimed to have almost no memos, emails, texts, or other documents showing how the measures were developed.

The group received a tip that the mayor's office was using Dropbox to communicate and advising staff not to mention it in texts and emails. After the comptroller and state attorney declined to investigate the matter, Organize Now teamed up with the First Amendment Foundation and filed a new request asking for, among other things, the dropbox activity logs, deleted item logs, and names of all individuals who have access to the dropbox.

Those records showed that the mayor's office deleted multiple records just one day after the NBC affiliate, WESH 2, reported on the mayor's use of the file sharing system. It was the first time in two years that any records had been deleted from the Dropbox, Porta says, yet the county claimed the deletions were part of "routine maintenance."

The records also showed that, one day after Organize Now's open records request was filed, the mayor's office deleted 18 devices (like computers and Ipads) that had access to the Dropbox. The names of those device owners and their IP addresses were redacted, despite there being no statutory justification for doing so. The records also suggested that others were logging-in to the Dropbox with the same username and password, further obscuring the identity of those who have had access.

"The Mayor has said she would share any and all information related to the Dropbox, yet what little she's provided so far is rife with deletions and redactions," Porta said.

Organize Now then filed suit asking a court to make the unredacted records available and to prevent the mayor's office from deleting any records.

"The [withheld] documents likely relate to ordinances that will go on the ballot," said Peterson, the First Amendment Foundation president. "Who has been looking at the documents and who has given advice is hugely important to public, and that is now what they are trying to deny the public's right to see," she said.

The "dropbox dodge" might sound familiar. The tactic first came to light in the course of the Center for Media and Democracy's work researching ALEC.

At some point in 2012, ALEC began sending legislators meeting agendas and model bills via a link, which expired within 72 hours, to an Internet drop box where they could access the relevant documents. In many cases, when legislators responded to a request for ALEC records, they only released a scanned copy of the email invitation, rather than the contents of the folder available via the link.

In May of 2013, after CMD filed an open records lawsuit against Wisconsin state Senator Leah Vukmir for refusing to turn over ALEC-related public records, the Wisconsin State Journal reached out to ALEC for comment -- and the group admitted that they were using the internet dropbox to evade public records laws.

According to the State Journal, ALEC senior director of policy and strategic initiatives Michael Bowman "said ALEC began distributing information through drop boxes -- Internet-based files accessible only by invitation -- instead of email because the group received advice from an attorney indicating that those files weren't subject to records laws."

That attorney was wrong. CMD prevailed in its public records lawsuit earlier this year, and as part of the settlement agreement, Senator Vukmir acknowledged that documents held on an internet dropbox are subject to the public records law.

This also isn't Mayor Jacobs' first run-in with sunshine laws. Last year, the Mayor and several Orange County Commissioners were fined for violating the public records law by deleting text messages between themselves and lobbyists ahead of a controversial vote to keep a paid sick days measure off the ballot. The texts were sent during a public meeting, with lobbyists giving the elected officials advice on how to delay taking action on the citizen-led initiative.

In one text message, Orange County GOP Chair Lew Oliver texted Commissioner Ted Edwards saying he wants "at least one good faith straight face test reason to at least delay it long enough to keep it off the ballot in November. After that, the Legislature can deliver the kill shot."

The "kill shot" would come from Florida state legislators enacting a "preemption" bill blocking counties and cities from enacting paid sick day requirements -- a measure that, like the "dropbox dodge," can be traced back to ALEC.