Jane Kleeb and Bold Nebraska were coy at first, posting a tantalizing message that held a promise of… what? 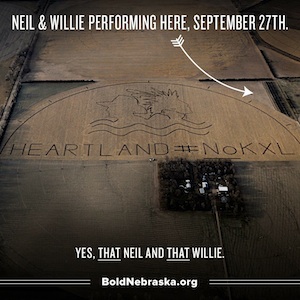 Well, what could it be? Could it be that their lawsuit against the governor’s unconstitutional power grab that handed over their farms and ranches to TransCanada won at the appellate level? Could it be that their efforts to wrest #NoKXL commitments and pro-New Energy policies from Nebraska’s congressional candidates were successful? Because either of those would be big news.

When the announcement came, it was a really big deal.

Country music legend Willie Nelson and Rock & Roll Hall of Famer Neil Young will be performing next month in Neligh, Nebraska, to raise money for Bold Nebraska, the Indigenous Environmental Network and the Cowboy & Indian Alliance, groups continuing to fight against Keystone XL and the threat it poses to their land and water. The concert is called “Harvest the Hope,” and will take place on a farm owned by a family who refused to sell out to TransCanada.

“Farmers, ranchers and tribes that have been standing up to TransCanada are rock stars in my eyes,” Kleeb, Bold Nebraska’s director, said in a statement. “Now we will have the honor to have music legends Neil Young and Willie Nelson stand with us against this risky pipeline that threatens our water and our livelihoods. It is our hope that President Obama in the end stands with us over Big Oil.”

Young and Nelson, whose combined careers exceed 100 years in the public eye, haven’t shied away from taking a stance on social and political issues.

After writing country standards like “Crazy” and “Hello Walls,” Nelson’s musical career took on a new trajectory in the 1960s, when he and other rebellious stars– including Johnny Cash, Merle Haggard, and Waylon Jennings– stepped away from the Nashville hit machine and began writing and playing songs that addressed the changing moods and mores of the times, and the social misfits they spawned. The movement was called “Outlaw Country.”

Young’s history of political involvement is no secret. His responses to racial turmoil in the South are rock classics; “Southern Man” and “Alabama” are foundational in the protest-rock canon. But it was “Ohio,” the song he wrote in the immediate aftermath of the killing of four students at Kent State University by National Guardsmen, that cemented his place in political music.

Young and Nelson have joined forces before in Nebraska. They, along with John Mellencamp, created Farm Aid, the musical festival to raise awareness and money for family farmers who were losing their land to banks and industrial farming. In 1987, a crowd of 69,000 joined Young and Nelson for Farm Aid III, the largest concert in Nebraska history.

Young has been especially outspoken about tar sands development. Earlier this year, he toured the country, criticizing the government of Canadian Prime Minister Stephen Harper for, in Young’s words, “trading integrity for money.”

Naturally, Young’s criticism drew fire from the Harper government, which is known to respond with snark where diplomacy and statesmanship are called for. Natural Resources Minister Joe Oliver responded that “even the lifestyle of a rock star relies, to some degree, on the resources developed by thousands of hard-working Canadians every day.”

If rock stars need oil is an official response, how does that affect the treaties Mr. Harper’s government of Canada is breaking? Of course, rock stars don’t need oil. I drove my electric car from California to the Tar sands and on to Washington DC without using any oil at all and I’m a rock star. My car’s generator runs on biomass, one of several future fuels Canada should be developing for the Post Fossil Fuel Age. This age of renewable fuels could save our grandchildren from the ravages of climate related disasters spawned by the Fossil Fuel Age; but we have to get started.

Young and Nelson are ready to get started, and they’re inviting you along.

Tickets are on sale today.