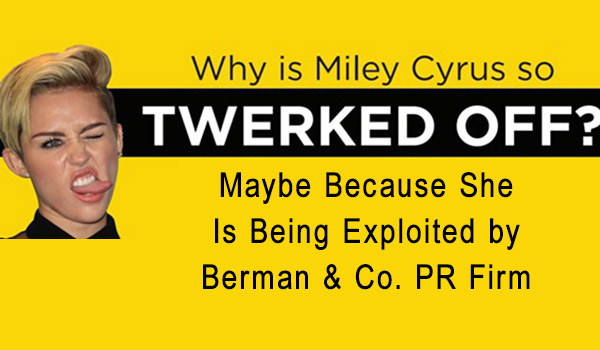 On an almost daily basis, Miley Cyrus can be seen in grocery store lines on the cover of entertainment magazines and gossip rags. But now Cyrus is appearing in one place you might not have expected – on a billboard in Los Angeles denouncing higher wages.

The Employment Policies Institute (EPI), whose president is Richard Berman, the infamous PR flak dubbed "Dr. Evil" by 60 Minutes, reportedly purchased the image of Cyrus for a billboard attacking California's $9 minimum wage. Apparently, Berman's clients think that nine bucks an hour is just too much money for folks in Los Angeles, where the cost of living is skyrocketing.

The 72-year-old Berman may not know what twerking means, but he certainly knows how to exploit young people to advance his corporate agenda. Through the years, Berman has launched PR campaigns to convince people that smoking bans are bad, fast food is good, and tanning beds pose no risk of cancer.

Now, through his phony EPI think tank, he is working to convince America that a fair minimum wage will harm teens and the economy, when the opposite is true.

In recent months, the 501 (c)(3) tax exempt Employment Policies Institute (not to be confused with the Economic Policy Institute, a legitimate think tank packed with economists and PhDs) appears to have become supercharged, writing opeds in newspapers across the country and spending big bucks on high-dollar PR tactics, such as full page New York Times ads and TV commercials that warn America of the dangers of higher wages (not to mention the invasion of "commie" economists who back them).

The fact is that EPI doesn't know what it is talking about. A growing body of evidence, including a study of wage hikes during recent high periods of unemployment, shows that minimum wage increases do not cause job loss or slow rehiring. But that doesn't stop newspaper editors from accepting Berman's spin.

A recent review by CMD showed that only 3 percent of the time did newspapers correctly identify EPI as tied to Berman & Co. It isn't hard. As a front page New York Times story pointed out earlier this year, EPI shares an address with Berman & Co. and the PR firm "bills" the tax-exempt nonprofit for services, making it a highly questionable money making venture.

Not only is Berman's EPI fighting against rate hikes for general hourly employees, but it also fights tooth and nail against any effort to raise the wage for tipped workers. For 22 years, the federal tipped minimum wage has been stuck at $2.13 an hour, and the gap between the minimum wage and the tipped minimum has never been higher. While Berman likes to portray restaurant workers as young teens, the facts are that two-thirds of food workers are over 21 and 66 percent are women, many of whom are mothers. Some 3.3 million workers get this "subminimum" wage, and many need to rely on foodstamps and other public services to make ends meet. At the same time, restaurant industry profits and CEO pay are soaring, documents the Institute for Policy Studies.

Recently, Berman's EPI ran a wraparound ad in the Washington Post promoting another one of its proliferating websites, Tipped Wage. The ad shows a well-dressed white guy being erased and pleads, "Don't erase my job -- or my tips," as if tips would disappear if workers are given an increase in their $2.13 salary. In the ad, EPI claims to cite the "best economic research," which purports to show that restaurant employment will "dramatically" fall if wages rise. In fact, the best economic research shows that the states with the highest tipped wage have a booming restaurant sector and that raising the wage floor helps workers at the bottom as well as at the top of the wage scale.

But Berman's PR campaigns aren't limited to the economics. He seeks to distort the images of the groups fighting to raise wages.

One of the websites tied to Berman by an electronic "paper trail" is ROCexposed.org, dedicated to tearing down the New York-based non-profit Restaurant Opportunities Center. Founded in memory of the restaurant workers who died on 9-11, ROC advocates for higher wages and fair treatment for restaurant workers. As CMD reported, Berman appears to have tag-teamed with an old client and tipped-wage foe: the National Restaurant Association. Dubbed the "Other NRA", the behemoth food industry lobby shop has apparently earmarked more than $600,000 to attack the Restaurant Opportunities Center and lists ROCexposed.org as a key ally in those efforts. Similarly, Berman's attack website Activistcash.org spins tall tales about his critics, including the Center for Media and Democracy.

Another of Berman's most recent PR campaigns involves the Environmental Policy Alliance (EPA), a front group created in the spring of 2014. "EPA" sounds like a ringing endorsement for all things green, and it uses a symbol that looks a heck of a lot like the symbol used by the actual EPA, but a closer look reveals an agenda that only the fossil fuel industry would love.

In June 2014, as a response to the Obama administration's announcement of new federal rules that will dramatically slash emissions from existing power plants, Berman's EPA Facts unleashed a full-page ad in both Politico and USA Today condemning the move as a radical threat to the country's energy resources. The ad compared the administration to a terrorist organization and trumpeted unsubstantiated claims that the rules threatened "to shut down about 25 percent of the energy that powers America's electric grid."

Berman's "EPA" frontgroup operates a number of websites, including Big Green Radicals, EPA Facts, Green Decoys, and LEED Exposed, each taking on a different issue within the environmental movement. Big Green Radicals spends a lot of time attempting to tear down groups like the Sierra Club and Food and Water Watch, an effective DC-based consumer group that fights to protect water and campaigns against fracking. FWW views the Berman attacks as a badge of honor and uses them to raise funds for their campaigns, not the result Berman would hope for.

Berman is also fond of attacking people seeking to protect animals; he does this via his Center for Consumer Freedom (CCF) front group.

In July 2014, CCF relaunched the attack site PETA Kills Animals. The site berates PETA for "dirty tactics," features graphic images of dead dogs, and calls for PETA to be "put down." Berman clients may be upset about PETA's effective campaigns against abusive factory farming practices that underpin cheap eats and the fast food industry. It should come as no surprise that sick and abused animals that are brought to PETA shelters often have to be euthanized. PETA discloses its data on these cases, and then Berman exploits those records to tarnish the organization.

In May 2014, another CCF website, Humane Watch, launched new ads, including one in USA Today charging the Humane Society of the United States with being corrupt and mismanaged. HSUS spokesperson Alan Heymann speculated that industry interests, like factory farms and puppy mills, are fearful of HSUS's work and were fueling the attacks to discredit the organization. He added that if Berman and his front groups really cared about animal welfare, they would choose to invest directly in other animal rights groups rather than slandering a reputable charity.

According to a report in LA Weekly, the use of Cyrus' image could land the Berman team in hot water: "Most celebrities are very litigious, and if [Cyrus] doesn't stand behind it they could end up being in a legal mess," said Steven M. Weinberg, an intellectual property and branding attorney. "It's okay to use something in an informational, First Amendment way, but if you look like she's endorsing it you could run into problems. If, in fact, this is not her position, then it may transcend First Amendment protection."

If Cyrus doesn't take action, next we will hear that she was spotted with President Obama shooting cats and dogs at an HSUS fundraiser. Nothing seems beneath the Berman spin machine.

Check out the Center for Media and Democracy's profiles of Berman front groups and attack websites in our SourceWatch wiki: