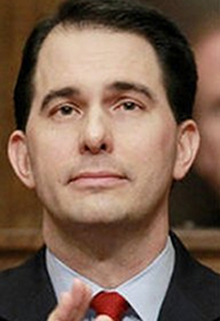 Legislative Republicans surprised many in the state in March of 2014 when they tried to rush Senate Bill 654 through the legislature to explicitly carve-out an exception to the state's campaign finance statutes for so-called "issue ads," those thinly-veiled election messages that stop short of telling viewers to vote for or against a candidate.

The John Doe investigation was never mentioned during testimony on SB 654, even among the bill's opponents.

At the time, the most obvious implication of SB 654 was less disclosure of funds spent to influence state elections. Many were also alarmed at how Republicans tried to fast-track the bill through the legislature in the final days of the legislative session, with minimal opportunity for public input.

Now, the Center for Media and Democracy's review of the SB 654 drafting files shows that senate elections committee chair Sen. Mary Lazich (R) had begun working on the bill five months earlier, in October 2013 -- just weeks after secret John Doe subpoenas were issued to Wisconsin Club for Growth, the Walker campaign, and other groups.

The timing provides further evidence that the legislation was designed to have an impact on the conduct under investigation in the John Doe. The Center for Media and Democracy identified this possibility when the bill was being debated, but it was never discussed when the legislation was being fast tracked and debated in March.

On October 3, 2013, prosecutors secretly served Wisconsin Club for Growth director Eric O'Keefe with a subpoena in the John Doe investigation, and executed search warrants on the homes of Walker's top campaign advisor R.J. Johnson (who also was the Club's chief strategist) and his associate Deborah Jordahl.

At the time, the John Doe was operating under strict secrecy orders. But recently-unsealed documents show that the bipartisan group of John Doe prosecutors alleged that the Walker campaign and legislative leaders were part of a "criminal scheme" to violate Wisconsin's disclosure and donation laws during the 2011 and 2012 recall elections, based on evidence of coordination with nonprofit groups such as Wisconsin Club for Growth. The Club spent at least $9.1 million on electoral issue ads during the recalls, and acted as a hub for funneling millions more to other politically-active groups.

By changing the law to put issue ads beyond the reach of Wisconsin's campaign finance statutes, Lazich's bill would have had the effect of legalizing the issue ad coordination under investigation. Lazich was the subject of a recall attempt in 2011.

The October 18 drafting request states that Lazich's office wanted the bill "today." The bill was quickly drawn up by the LRB, but Lazich would not introduce it for five months.

In the meantime, Wisconsin Club for Growth and the Walker campaign challenged the subpoenas in state court, and argued that the investigation should not move forward since Wisconsin law doesn't explicitly mention issue ads. Prosecutors argued that appellate courts had interpreted Wisconsin statutes to count "issue ads" coordinated with a candidate as contributions, which must comply with disclosure requirements and contribution limits. The Walker campaign may have committed a criminal violation, prosecutors alleged, by knowingly filing false campaign finance reports omitting millions of dollars of contributions.

In January, Judge Gregory Peterson sided with the Club's arguments and quashed subpoenas issued to Wisconsin Club for Growth, the Walker campaign, and Wisconsin Manufacturers and Commerce. But two weeks later he stayed his own order and asked an appellate court to resolve the plausible legal interpretations in the dispute between prosecutors and the Walker campaign over the scope of Wisconsin law.

In February, while the state court appeal was pending, Wisconsin Club for Growth sued in federal court to stop the investigation, claiming it amounted to a violation of their purported free speech rights. (Their complaint also attacked the Center for Media and Democracy with false claims that were rebutted.)

In March, during the dwindling days of the legislative session, Senator Lazich introduced the bill her office had first drafted in October. It was introduced late on a Monday, scheduled for its only public hearing on Wednesday, and fast-tracked for passage with minimal public review.

The three groups that registered to lobby in favor of SB 654 have also been implicated in the John Doe investigation.

Wisconsin Manufacturers and Commerce backed SB 654, and its Vice President of Government Relations, Scott Manley, testified in support of the bill. According to recently-unsealed court documents, the U.S. Chamber of Commerce affiliate received a subpoena in the John Doe and prosecutors believe WMC was deeply involved in the alleged criminal coordination scheme. WMC's Senior Vice President James Buchen regularly participated in conference calls with Walker and others about the 2011 and 2012 recall elections. WMC also received nearly $3.4 million from Wisconsin Club for Growth, and according to prosecutors, "became a means used by WiCFG for placement of advertisements during the recall campaign supporting Governor Scott Walker and criticizing his opponents."

Wisconsin Family Action also lobbied in favor of the bill, and was effectively an arm of Wisconsin Club for Growth during the recall elections. It received 90 percent of its funding in 2011 from Citizens for a Strong America, which was 99.99% funded by Wisconsin Club for Growth and controlled by R.J. Johnson. It also received $253,000 from Citizens for a Strong America in 2012.

The powerful Wisconsin Realtors Association was the third group to support SB 654. The realtor's trade association is one of the biggest political spenders in the state, and gave at least $1 million to Wisconsin Club for Growth during the 2010-2011 fiscal year. The association's top lobbyist at the time, Jim Villa, is a longtime confidant of Governor Walker -- he was Walker's chief of staff during his time as a state legislator and during part of Walker's time as County Executive -- and was recently awarded a high-ranking job in the University of Wisconsin System.

Each of those testifying insisted that SB 654 only "codified" existing law. But they failed to mention how it would overturn the same Wisconsin Court of Appeals precedent that prosecutors were relying on in the John Doe investigation.

Jay Heck, Executive Director of Common Cause Wisconsin, testified against SB 654 in March 2014, but tells the Center for Media and Democracy that he thought it "inconceivable" at the time that Republicans would be seeking to change the law on coordination in the middle of a criminal investigation, and that the organizations pushing SB 654 were doing so while subject to subpoenas in a criminal case. Their connection to the John Doe was not public at the time the bill was being debated, and the investigation was never mentioned during their testimony.

But given the new evidence that Lazich's office called for the bill just weeks after the John Doe subpoenas were served, he now says "this is more than coincidental."

"I'm just in disbelief at how brazen this is," he said.

The John Doe remains halted but is currently under review by the U.S. Court of Appeals for the Seventh Circuit, which reversed an order by Judge Rudolph Randa to destroy the evidence obtained in the criminal case. A state appellate court is also reviewing Judge Peterson's decision from January.

This is a lie. I watch Fox all the time and there has not been one word about it.
<p>I suggest you expand the number of news outlets you utilize. Please review the drafting file attached to this report. Please note that no one has contacted CMD for a correction to this report.</p>
lighten up a bit mary
I think that was a joke.
You trolling? Or are you being serious
Scott Walker will never be President of anything other than some made up job of the Koch brothers. The marvel of today's technology and journalism is that increasingly, bought and paid for creeps like Walker and Christie get outed before getting elected nationally.
Giga: How do you know it is a lie, just because it is something you haven't heard of? Could it be a truth that has not been revealed to you by Faux News? Perhaps opening your mind to more than one news outlet might enhance a learning of news that is censored or filtered out of a right wing slanted media "news" outlet.
Walker is trying his best to wiggle out of the things he did I hope he will not get away with this.