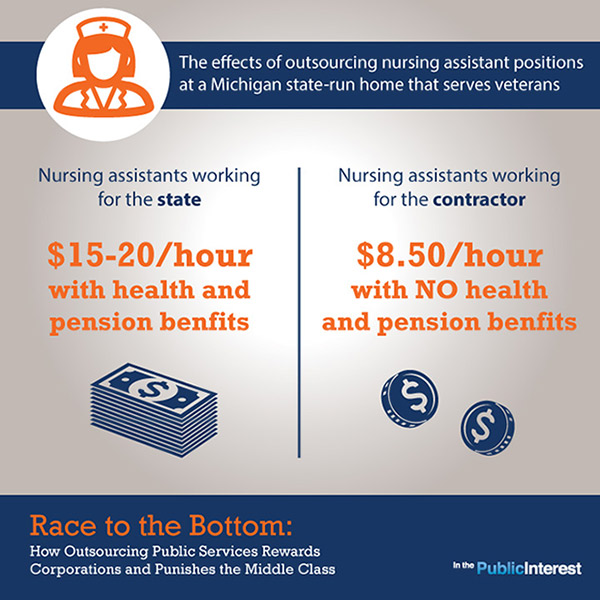 All across the country, public services are increasingly outsourced to private contractors in the name of efficiency and cost savings. But a new report from the non-profit research group In the Public Interest (ITPI) shows that outsourcing public services hurts middle and working class communities as well as workers.

The report, "Race to the Bottom: How Outsourcing Public Services Rewards Corporations and Punishes the Middle Class," makes the case that when private contractors make huge profits from taxpayer dollars, money is often sucked out of local communities. Dollars that used to go to employees are sent to shareholders instead, harming communities as local workers have less to spend. Taxpayers take another hit when employees, who used to have access to health care and good wages, now have to rely on food stamps and Medicaid to survive.

“False promises of privatization trigger a race to the bottom. CEOs do well, but middle class jobs are replaced with poverty wages,” says ITPI’s Donald Cohen.

Privatization Fuels a Race to the Bottom

The "Race to the Bottom" report documents how when federal, state, and local governments pay hundreds of billions of taxpayer dollars to contractors for jobs that pay so little, they leave employees dependent on the social safety net. These costs are not being taken into account by governments. For example, the report cites a 2010 study that showed contracted school cafeteria employees in California received an average of $1,743 in public assistance--in effect, an additional public subsidy for a private contractor's low wages.

Mary Sparrow was a housekeeper for the Milwaukee County Courthouse when it was privatized under then-Milwaukee County Executive Scott Walker in 2010. She was offered a new job by the new contractor, but her wages would have dropped from $14.29 with benefits to $8 without benefits. She searched for a better job, but in the meantime her unemployment benefits went to maintaining her healthcare benefits through COBRA and she had to dip into her son’s college savings account.

“Privatizing has had a devastating effect on our community. It is not just what we get paid, but what we spend in our communities. Privatizers get ahead, but not the front line workers,” said Sparrow.

The personal toll is high. "I still get calls from friends who want to give up,” says Sparrow, choking up. “This has been awful for us and I hope that any community or any state would think twice before privatizing.”

“Government historically created a ladder of opportunity by paying family-supporting wages and providing important benefits,” said Shar Habibi, author of the report. “This is especially true for women and African-Americans, allowing millions of them to reach the middle class." Outsourcing "turns middle class careers into poverty-level jobs, and taxpayers inadvertently support the dismantling of our once-robust middle class."

Habibi noted that there was a growing body of evidence that outsourcing leads to a downward spiral as that ladder of opportunity disappears. Reduced wages and benefits not only make it harder for working people to enter the middle class, they also hurt local economies as those workers have less to spend, reducing the stability of working and middle class communities.

As the report notes, government is becoming a major source of low-wage jobs. Rather than helping to raise living standards for all, privatization and subcontracting is becoming a force in growing inequality. By 2013, according to a study by Demos, the number of contracted employees working on behalf of the federal government who earned less than $12/hour had already reached 2 million--more than the number of low-paid workers at Walmart and McDonald's combined.

Many cases detailed in the report reveal how low pay hurts both workers and the people they care for. For example in 2011, the state of Michigan was considering a plan to outsource staffing for all nursing assistants in a state-run home for veterans located in Grand Rapids. At the time, the home was staffed by a combination of directly employed nursing assistants and contracted positions. It was something of a case study in the hidden costs of privatization.

Even though the contractor billed $14.99 per hour for each nursing assistant it hired, it paid out as little as $8.50, with no health or pension benefits. Low pay left nursing assistants like Ginny Townsend earning half as much as public employees for doing the same work. In Townsend's case, that wasn't nearly enough to support her four grandchildren, leaving her to rely on $300 in food stamp benefits each month to survive.

This low pay turns out to have a high cost when it comes to the quality of nursing care. Compared to state-employed nursing assistants, contracted positions have a high turnover rate. Contracted staff are more likely to lift patients improperly, risking injury to patients.

"You get what you pay for," said Jared Bernstein, a senior fellow at the Center on Budget and Policy Priorities and former Chief Economist and Economic Adviser to Vice President Joe Biden.He explained that the quality of work often "falls steeply" when pay is reduced.

And with low-paid contract workers often newly dependent on social services, "savings in one budget column end up as costs in a different budget column," Bernstein said.

Despite clear evidence that state employees provided a better level of care for patients, the Republican leadership of the state decided to go through with the plan to outsource all nursing assistant positions.

Outsourcing definitely has at least one beneficiary: CEOs of the companies that win public contracts. The report cites the case of Aramark, which provides school lunches. The CEO of Aramark, Eric Foss, took home over $18 million in total compensation in 2013. Just two years earlier, Aramark had halved wages for custodial employees when it took the contract for the Chelmsford, Massachusetts school district. The company seemingly couldn't afford to pay more than $8.75/hour to workers like Rick Thorne, who had worked his way up to $20/hour after 22 years in the district.

In New Orleans, Carol Sanders had raised a family and paid a mortgage on her income as a cook for the local school system, earning $15/hour after 28 years on the job. After the work was outsourced to Aramark, Sanders saw her pay cut and her hours scaled back, leaving her without medical insurance and newly reliant on food stamps.

In too many cases, outsourcing gives an illusion of savings at the cost of increased income inequality, increased spending on public assistance programs, measurable decline in the quality and safety of important public services, and the disappearance of an important "ladder of opportunity" for millions of hard-working Americans.

The report's authors recommend that governments begin to:

The report concludes that these policies could help "rebuild those ladders to the middle class" by ensuring that taxpayer dollars support "solid family-supporting jobs."

Jessica Mason contributed to this report. Learn more about privatization at OutsourcingAmericaExposed.org a resource developed in partnership with ITPI.