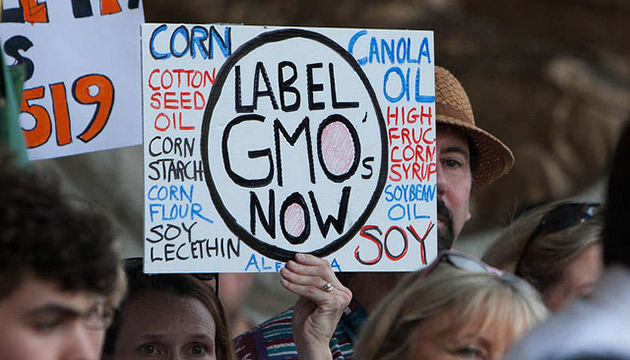 A coalition of genetically modified organism (GMO), pesticide, grocery and agriculture corporate trade groups are fighting mandatory labeling efforts at the state and local level by pushing preemption measures in Congress and at the U.S. Food and Drug Administration (FDA).

The GMO lobby has found a Congressional sponsor for its "federal solution" -- a bill to override states' mandatory GMO labeling laws and replace them with optional labeling regulated by the FDA -- according to Politico. Rep. Mike Pompeo (R-KS) reportedly hopes to introduce the bill, which would "create a friendlier, preemptive set of federal rules to quell public concerns over GMOs and stem the roughly 20 pending state bills and ballot initiatives that will be costly for the industry to fight," before the Spring legislative recess.

Optional, as opposed to mandatory, GMO labeling has been called "absolutely ineffective" by advocates of the public's "right to know" about GMOs in food, as the Center for Media and Democracy (CMD) has reported.

Pompeo is not well known for passing bills in Congress. He is known for being the single largest recipient of campaign funding from Koch Industries' PACs and employees in 2010. And h has introduced several bills friendly to the Koch brothers' interests, according to the Washington Post. The Huffington Post recently called him "the Koch brothers' point man in the House." Pompeo is Koch Industries' top recipient again in the current election cycle, according to OpenSecrets.org.

"Selecting Pompeo creates an unholy alliance between Monsanto and Koch Industries, two of the most reviled corporations in America," says Colin O'Neill of the Center for Food Safety, an organization that supports GMO labeling.

An amendment introduced to the most recent farm bill by Rep. Steve King (R-IA) that analysts say would have preempted state GMO labeling laws as well as many other state agriculture, food, and food safety laws was defeated in 2013.

The GMO lobby's efforts to persuade the FDA to advance voluntary labeling appear to be gaining more traction. FDA Commissioner Margaret Hamburg said in a House subcommittee hearing on the FDA's proposed budget last week that the administration hopes to finalize its proposed guidance on optional labeling of GMOs, according to Politico Pro.

"Mandatory labeling really is appropriate when there is a fault claim. The fact that a product contains GE ingredients does not change the material content of the product," Hamburg said, adding, "We have not found evidence of safety risks. It's an area that deserves further discussion and study."

Critics, such as a group of doctors who signed a 2012 statement calling for GMO labeling, give this uncertainty as exactly the reason why mandatory labeling is advisable: "In the face of scientific uncertainty, labeling is a common risk management tool and one that could help track any potential adverse health effects," the doctors wrote.

FDA guidance documents are non-binding advice for industry. They "do not create or confer any rights for or on any person and do not operate to bind FDA or the public. You can use an alternative approach if the approach satisfies the requirements of the applicable statutes and regulations," explains the FDA on its website.

However, critics worry that the FDA's proposed guidance could interfere with state and Congressional efforts to mandate GMO labeling. Moreover, the FDA's "no evidence" statements will likely continue to be used by GMO corporations and their backers to lend legitimacy to the fallacy that there is therefore no potential harm in GMOs.

Meanwhile, scientific studies continue to find evidence of negative health effects of the herbicides to which most GMOs are built to be "resistant" (i.e., they can be sprayed with more of them without being zapped themselves), such as the 2010 study that found that low doses of glyphosate cause birth defects in frogs and chickens (and the revelation that Monsanto was aware of Roundup's link to birth defects for decades). And scientists continue to point to the need for further research into the human health effects of GMOs themselves.

The stakes are high for the 93 percent of Americans who would like to see GMO labels on food products. The United States continues to be the world's largest commercial grower of GMO crops, with over 173 million acres grown. Ninety-three percent of soy and 85 percent of corn grown in the country is GMO, much of which makes its way into processed food.

Will Americans' food choices continue to be between "probably GMO" and "possibly not GMO," or will mandatory labels give eaters the ability to make truly informed decisions?