Why We Should Oppose the Trans Pacific Partnership | PR Watch

Why We Should Oppose the Trans Pacific Partnership

John Kinsman, the author of this op-ed first published in The Capital Times in 2012, passed away on January 20, 2014. He was a leader of the global food sovereignty movement who was deeply committed to equality, justice, and peace. The Center for Media and Democracy is republishing his still very timely article as Congress considers fast track authority for the Trans Pacific Partnership, in honor of Kinsman's inspirational life and work. 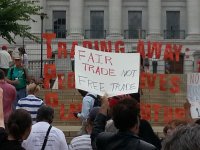 The latest free trade deal that is now being rushed by President Obama through Congress is known as the Trans Pacific Partnership (TPP). Thirty years ago the first free trade deals were enacted under the auspices of the World Trade Organization (WTO), followed by the North American Free Trade Agreement (NAFTA), the Central American Free Trade Agreement (CAFTA), the Australia US Free Trade Agreement (AUSFTA), and many more. During this time, the global economic crisis accelerated at an alarming rate, with only the one percent reaping the profits. This ongoing crisis will not end until these destructive free trade agreements are repealed and fair trade becomes the norm.

Most recently, the Korea US Free Trade Agreement (KORUS FTA) was signed over the objections of many labor, farm, and consumer groups in both countries. According to the February 8 edition of the Korea Times, the leader of the Democratic United Party (DUP) vowed to nullify this deal once in power, and it is predicted the DUP will win this year's general election. In an open letter to President Obama, Vice President Biden, and House Speaker Boehner, the DUP called upon the US "to reconsider the KORUS FTA in order to truly strengthen the long-term relationship between our countries. If our cordial and earnest request is overlooked by your administration, we will have to take all measures possible to freeze the implementation of the KORUS FTA."

Why would anyone expect anything but another race to the bottom in terms of farm prices, worker wages, environmental standards, and human rights with passage of the TPP? We need only look at what happened in the years following NAFTA: Over two million Mexican farmers driven off their land by subsidized US corn dumping. Risking their lives, farmers migrated across the border in search of work -- families torn apart as fathers, mothers, brothers and sisters disappeared. Some died in the desert, others were murdered by traffickers (coyotes) and rightwing vigilantes. So devalued as human beings, their lives were not even worth counting. Similarly, in the US and Canada thousands of family farmers and small business owners have seen their livelihoods sacrificed on the altar of greater corporate profit.

Those in the one percent who are now pushing the TPP hope to take advantage of the huge supply of cheap labor and natural resources to be found in the Pacific Rim. The recent expose of the Chinese sweatshops behind Apple's iPhones, where workers regularly commit suicide by jumping off factory rooftops, is just the tip of the iceberg when it comes to the horrific conditions that are spawned by these free trade deals.

Who else will lose under the TPP? US dairy farmers fear they will go bankrupt as cheap foreign powder imports like milk protein concentrate (MPC) flood the domestic market. US consumers will likely face more contaminated products -- whether it is pet food laced with melamine or children's toys coated with lead paint. US pharmaceutical giants are poised to undermine access to generic drugs by imposing their expensive patents on Australia and New Zealand where people currently enjoy better and more affordable health care than is found here. Japanese farmers and consumers will be forced to accept genetically engineered crops and hormone-tainted meat exported by US agribusiness. So much for freedom under free trade.

As Congress considers the TPP, we need to express our opposition -- not only to convince our elected officials that this will just lead to more economic chaos on top of the current crisis, but to also let our friends across the Pacific know that they are not alone in opposing free trade deals that are only designed to profit the one percent. Those of us in the ninety-nine percent will end up losers if we do not repeal KORUS and stop the TPP. We could ALL be winners if we worked together in constructive cooperation for a new global economic system based upon fair trade instead.