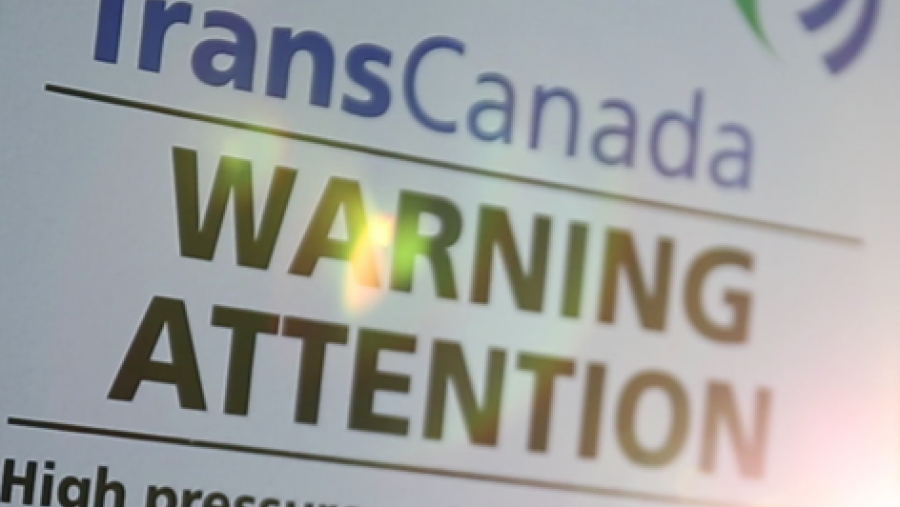 Leaked documents expose a plan by Edelman for TransCanada to launch an "aggressive" American-style policy/politics PR campaign to persuade Canadians to support a Canada-based alternative to the stalled Keystone XL pipeline to get controversial tar sands oil to refineries in eastern Canada for export.

But, according to the documents, this Canada-centric campaign would actually be run out of an office in Washington, DC. And the digital campaign is being led by a rightwing American political operative employed by the world's largest public relations firm.

The documents were obtained by Greenpeace.

Ian Austen of The New York Times published some excerpts from the planning documents on November 17 that show how a new PR operation is in the works to persuade skeptical Canadians the "Energy East Pipeline" from Alberta to Quebec and to New Brunswick is a good idea.

The proposed pipeline conversion from gas to oil and the expansion of the line would allow TransCanada’s corporate partners to sell more tar sands oil to foreign countries than it can under TransCanada's current shipping methods, with the completion of its proposed southern route through the U.S. to the Gulf of Mexico on hold.

Austen's story not only revealed details of the war plan Edelman put together to try to distract opponents of TransCanada and waste their resources, it also secured confirmation that Canada's big energy company had conducted "opposition research" digging for dirt on those who dare to oppose its business plans.

According to the documents: the PR campaign includes a "pressure" campaign against actvists, which included “Detailed Background Research on Key Opposition Groups,” beginning with the Council of Canadians, but would likely extended to Equiterre, the David Suzuki Foundation, Avaaz, and Ecology Ottawa.”

One of the activists the Times interviewed objected to such corporate tactics as "all wrong" if deployed against grandmothers like her: "To me it's a sign of desperation," Maude Barlow, who leads the Council of Canadians/Le Conseil des Canadiens, told Austen.

The Edelman documents for TransCanada note that to achieve their goal of adding "layers of difficulty for opponents, we will work with third parties and arm them with the information they need to pressure opponents and distract them from their mission . . . . Third-party voices must be identified, recruited and heard to build an echo chamber of aligned voices."

One of the identified tactics of this "third party technique," pioneered by corrupt U.S. tobacco companies, was Edelman's recommendation that professors be identified and used as trusted speakers to advance the corporation's point of view (while not disclosing that the academics had been recruited to do so or "armed" with corporate talking points). Edelman previously represented big tobacco companies for which it deployed the third party technique repeatedly.

The Council/Conseil noted that the TransCanada-Edelman digital PR operation is being led by a rightwing U.S. activist named Michael Krempasky. 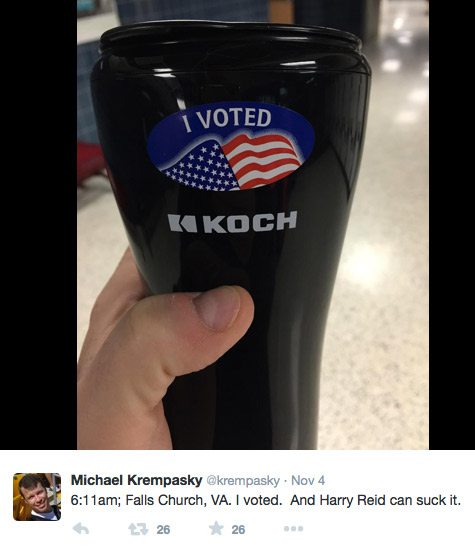 On election day just a few weeks ago, Krempasky tweeted a photo of his Koch Industries coffee mug with an "I voted" sticker and the message: "6:11am; Falls Church, VA; I voted; And Harry Reid can suck it." And just last year, Krempasky posted a photo of his personalized copy of the strategic plans of David Koch's Americans for Prosperity (a binder detailing for Krempasky and select insiders AFP's "strategy initiatives, past performance, budget allocations, target markets").

A few years back, Jack O'Dwyer's PR Daily noted that Edelman hired the RedState.org blogger and co-founder "for his ability to connect with conservative audiences." At RedState, Krempasky helped promote the growth of the "Tea Party," an activist movement in the U.S. whose infrastructure is actually fueled in part through major expenditures by two rightwing operations spawned by David Koch's "Citizens for a Sound Economy," the predecessor of AFP and "FreedomWorks."

Before Krempasky's hire was officially announced a few years ago, Michael Barbero of the New York Times reported that Krempasky was working with Marshall Manson at Edelman blogging Walmart's corporate talking points in support of Edelman's client, the largest retailer on the planet. Edelman's war room operation for Walmart came under fire at the time for how it was using bloggers and deploying an astroturf operation christened "Working Families for Walmart," back in 2006.

But Krempasky is notorious for more than what was dubbed "flogging" for Walmart.

His role in the coordinated rightwing effort to push CBS Evening News Anchor Dan Rather off the air apparently did not dissuade the Edelman firm from hiring him. The website "Rathergate.com" was run by Krempasky, who was then working as the political director of the rightwing political direct mail operation, American Target Advertising, which is chaired by powerful rightwing fundraiser Richard Viguerie.

Dan Rather--whom some rightwingers claimed was "intensely liberal"--and his producers were provided with faked documents critical of George W. Bush's service in the National Guard records a few months before the 2004 presidential election against Vietnam veteran John Kerry. After Rather ran the story without sufficient authentication, Krempansky and numerous other rightwing bloggers moved quickly to oust the broadcaster from his long-standing role editing the news for CBS. Both Republican and Democratic party leaders denied being the source of the materials that were critical of Bush but that effectively took claims that Bush dodged his military duties off the table after the documents were discredited.

Krempasky is also an alum of the "Leadeship Institute," which has long been funded in part by the Koch family fortune of oil conglomerate Koch Industries, which is led by billionaire brothers, Charles and David Koch. (The Leadership Institute has served as the training ground for thousands of rightwing activists, including the infamous ex-con James O'Keefe, whom it distanced itself from after one of his early PR stunts.)

On Twitter, Krempasky describes himself as a "flacktivist," a play on the words activist and "flack," slang for publicist.

Krempasky's team for TransCanada includes former GOP spokesperson Nate Bailey, who has aided Edelman in corporate campaigns for corporate clients known for trying to delay efforts to address climate change. It also includes Brian McNeill, who directed opposition research during John McCain's presidential bid in 2008 and who was also outed subsequently for being paid by Edelman to anonymously blog about groups that were described by him as paid critics of Walmart.

The leaked material includes some recent polling that may be illuminating both for the underlying findings and by the Edelman approach to the polling:

It is not clear how much TransCanada or Edelman's other clients may be relying on trains for transporting oil or other petroleum products from the tar sands, but public awareness of the dangers of rail transport has increased after the Lac-Megantic derailment and explosion killed 47 Canadians. That disaster displaced hundreds of people in Quebec, where half the town was destroyed and severely contaminated with toxic Benzene. TransCanada was not involved in that disaster, although it has had numerous spills over the years, none as devastating.

Just this past week, President Obama critiqued some of the U.S. PR about what the Keystone XL is and what it is not, saying: "It is providing the ability of Canada to pump their oil, send it through our land, down to the Gulf, where it will be sold everywhere else." (CMD, the publisher of PRWatch, has debunked claims of Keystone proponents in the US with their inflated jobs and "national security" claims.)

The Energy East Pipeline proposal, as a substitute for Keystone XL for access to export infrastructure, would put the risk of a major pipeline leak on Canada rather than on the U.S. and its Ogallala aquifer that supplies fresh water for millions of Americans and American farms. According to Edelman's PR plan, Canada's federal and provincial governments would yield projected tax revenues, unlike in the U.S. which could not tax the production of the oil on Canadian soil, which does not tax the import of oil, and which has refineries for export located in free trade zones.

However, any pipeline expansion to allow increased burning of Alberta tar sands oil would increase the risks and increase the speed of climate and oceanic changes that are underway, with devastating consequences, according to leading scientists.  As James Hansen wrote in an op-ed in the New York Times in 2012, "If Canada proceeds . . . it will be game over for the planet." Environmental groups estimate that getting more tar sands oil exported and burned would greatly aggravate the climate, adding 30 million tons per year of carbon and greenhouse gases into the atmosphere and also threatening water and air as well as habitat for wildlife.

Despite such concerns, the U.S. Senate is poised to allow a vote in favor of the Keystone pipeline in a risky move to try to boost Senator Mary Landrieu's chances in an upcoming run-off election in Louisiana, even though her seat would not change the incoming majority in the upper house of Congress and risks alienating environmental voters within the Democratic party.

Independent economic analysis has shown that approving Keystone would directly create only a few thousand temporary and primarily non-local jobs plus exceedingly few permanent jobs anywhere in the U.S.

Some of the proponents of expanding exports of tar sands oil are climate change deniers, who support a host of measures that enrich the oil industry.

According to a report by Lee Fang for The Investigative Fund, Edelman was paid more than $50 million to run the PR campaign of the American Petroleum Institute (API), to push politicians to approve the Keystone XL pipeline, support tax deduction for the oil industry companies that fund API, and press for expanded drilling in America's national parks.  As Greenpeace documented, API's PR campaign included the astroturf group called "Energy Citizens," which includes corporate employees at corporate-bankrolled rallies to support corporate-friendly policies of their energy industries employer. TransCanada has funded ALEC, whose legislative agenda echoes the API agenda. (CMD launched ALECexposed.org in 2011.)

However, the current leader of TransCanada's PR firm, Dan Edelman, has taken to the blogosphere in recent months to claim that his firm would no longer work on climate denial campaigns and would no longer deploy astroturf.  Whether those public positions altered the implementation of the firm's TransCanada plan remains to be seen.

Even with the difficulties getting tar sands to coastal ports in the U.S. or Canada, TransCanada's pipeline business has proven lucrative for some. TransCanada's CEO, the 51-year old Russ Girling, received $8.4 million in direct compensation last year, a whopping 19% raise over the prior year (see uploaded screenshot below). In all, Girling has received corporate stock currently valued at $8.9 million and he has a defined benefit pension plan valued at $10.9 million, according to a 2014 circular for shareholders. His fellow TransCanada execs also have multimillion dollar compensation and pension plans.

It is unknown how much money Edelman or its principle staff have been paid or are poised to make from its efforts to promote TransCanada's eastward pipeline dreams to Canadians by deploying its DC PR team on a DC-style PR campaign to win over Canadians about what's best for Canada.

References to "Edelman" in this story refer to the PR firm, except for the single reference to Dan Edelman, which refers to the person.