Washington State voters are being subjected to nonstop ads about a ballot initiative to label genetically engineered foods, Initiative 522 (522). Most ads on 522 are sponsored by a record-breaking barrage of cash sent to their state by the biotech, chemical, and food industries that oppose it, although a few ads come from the Yes side. A look into the money pouring into Washington tells an anti-democratic tale of how a once-popular initiative is now statistically tied in the polls. 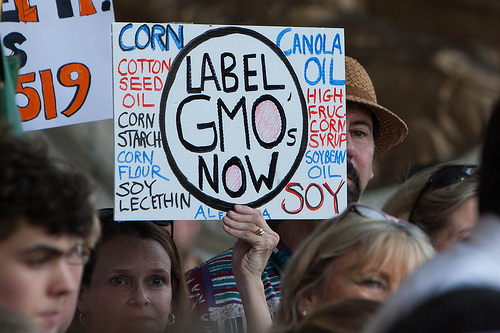 Initiative 522 would require labeling of genetically engineered foods, also known as genetically modified organisms or GMOs. These are foods that have genes from a different species inserted into their DNA, like a corn plant with genes from a bacterium.

Despite our ignorance about what we’re eating, over 90 percent of Americans say they want labeling. Some states, like Vermont, Maine, and New Hampshire, are considering bills to require labeling of genetically engineered foods in their legislatures. Connecticut has already passed such a bill -- the first state in the U.S. to do so. Washington is letting voters decide.

Despite industry’s assurance that GE foods are safe, many scientists are not convinced. For one thing, as Doug Gurian-Sherman, a plant pathologist with the Union of Concerned Scientists, points out, biotech companies prohibit any independent testing of their products. That means that the only safety testing ever done on GE foods is done by the companies that profit from them.

The crops are engineered to either survive treatment with an herbicide or to produce their own insecticide. The first generation of herbicide tolerant crops were engineered to withstand Roundup, an herbicide produced by Monsanto that is marketed as “safe.” In theory, the farmer sprays the entire field with Roundup and the weeds die while the crop survives.

But the next generation of herbicide tolerant crops are made to be sprayed with chemicals that do not even pretend to be safe. The USDA is currently considering allowing farmers to grow GE crops designed for use with herbicides that are known carcinogens and reproductive toxins. The other type of GE crops, those that produce their own insecticides, produce Bt, an organic pesticide made naturally by a type of bacteria. But when Bt is used by organic farmers, it is used only sporadically and breaks down quickly in the environment. In GE crops, every cell of the plant produces Bt all the time. In fact, a 2010 study found Bt in the blood of 93 percent of pregnant women and 80 percent of umbilical cord blood samples.

In other words, maybe we should do some independent testing of GE foods. And in the meantime, a majority of Americans believe they should be labeled.

Washington is not the first state to put the labeling question up to the voters. Last year, California narrowly voted down a similar measure, Prop 37. Initially, Prop 37 had two to one support -- until the opposition spent $45 million convincing Californians that Prop 37 was an inconsistent, poorly written measure that would increase their grocery bills. All that money did its job, and Prop 37 slid 13 percentage points before losing at the polls.

Washington’s Initiative 522 looks like déjà vu all over again. The opposition’s ads show a doctor, a pediatric dietitian, and even an organic farmer who identifies herself as a scientist, all telling voters that 522 is “a separate, misleading labeling system that would only exist in our state.” The ads drive home the words “misleading,” “costly,” and “unfair.”

The ads are doing their job, and polls show that 522 is now in a statistical dead heat. Yet, the most misleading thing about Initiative 522 is these opposition ads.

For example, the claim of increased grocery prices is unfounded, as it assumes that food manufacturers in Washington State will all switch to more expensive organic or certified non-GMO ingredients if the measure passes. An independent study commissioned by Just Label It, an organization in favor of labeling, found that labeling would not affect grocery prices. Consumers Union, publisher of Consumer Reports, offers factual information about 522 and strongly supports the measure.

All of the money for No on 522 came from the Grocery Manufacturers Association and five chemical and biotechnology corporations: Monsanto, DuPont, Dow, Bayer, and BASF. Oh, and a few individuals. Out of over $17.1 million raised, five real Washington state residents contributed a whopping $550.

But that’s not what you might think if you surfed onto the campaign website. There the group provides long lists of farmers, ranchers, scientists, organizations, farm groups, and individuals who support its position. This strategy is known as astroturf, because it aims to resemble an authentic grassroots campaign, just as astroturf is made to look like actual grass.

“The Largest Amount of Money Ever Concealed in an Election”

Here’s a question, though: Who are the Grocery Manufacturers of America (GMA)? And why are behemoths like Coca-Cola and PepsiCo staying silent on 522, when they poured millions into fighting Prop 37 in California last year?

It turns out that Coca-Cola, PepsiCo, Nestle, General Mills, and all the rest of the largest food companies in America weighed in on the 522 fight after all -- only this time, they did it secretly.

Last year, during the Prop 37 battle, these large food manufacturers took a beating in the press for their open opposition to labeling the genetically engineered ingredients in their products. This time around, they still wanted to donate, but did not want their reputations harmed for doing so. They all donated to a fund within GMA, and GMA, in turn, gave the money to the fight against 522.

All went well until a group called Moms for Labeling sued to find out GMA’s donors. The suit was thrown out, and then Washington’s Attorney General filed his own suit. The story was well-covered by public health watchdog Michele Simon, who explains that the secret fundraising actually broke the law, and the tactic was specifically intended to “better shield individual companies from attack.”

The irony is that No on 522, with its phony “grassroots” support and corporate mega-funding, is overshadowing an actual grassroots campaign. The $6.3 million raised by Yes on 522 came from 7,075 individual donations. About 97 percent of these contributions were under $1,000, and even the donations above $1,000 came from a broad donor base of 150 different organizations, farms, cooperatives, corporations, and individuals.

Although a large share of the funds raised came from out of state, quite a bit came from Washington. For example, one of the largest donors was PCC Natural Markets, which gave $100,000. PCC is a natural food cooperative with 49,000 members in the Greater Seattle area. Another $160,000 came from the Washington-based natural food company Nature’s Path.

The Yes on 522 campaign is an example of grassroots democracy in action, and the 522 fight shows how easily a handful of wealthy corporations can trample on democracy. Fortunately, thanks to successful enforcement of Washington’s laws, these companies don’t get to shield their reputations as well.

With only a week to go before the November 5 election, it appears that this corporate Goliath of cash may crush the grassroots David once again. Why are food companies so desperate to conceal from consumers the ingredients they are putting in our food?

They're not going to win our votes by confusing us this time. The entire community is engaged, thousands are standing up for GMO labeling. Join the call and make this election the beginning of the end for Monsanto! http://www.thepetitionsite.com/takeaction/584264860
It's your right to know - http://willvoteforfood.com
First, how is a report commissioned by a group that's very purpose is to promote GMO labeling considered independent? In fact, a truely independent analysis, published by an organization commissioned by the state (Washington Academy of Sciences), determined that prices would in fact rise. And how can you cite studies on the effects of Bt if the companies don't allow testing on their products (a false claim by the way)? Also, just because the No campaign was financed corporately doesn't mean it doesn't have grass root support. Plenty of physicians, scientists, and farmers threw their weight behind the No campaign because they fully believed that the initiative was poorly written and would be bad for Washingtonians. They supported the campaign through editorials and by lending their names to the coalitions, but did not need to spend the money because corporate support was there behind them. What the author, and she is not alone, doesn't seem to understand, is that no amount of raw advertising is going to convince voters to vote for something they don't believe in. If Washington voters truly believed that putting labels on products with produced with genetic engineering would benefit them, they would have voted that way, regardless of the "corporate" money being spent to influence them. As it stands, only about 30% of voters mailed in ballots this year. Over half of them said No on I-522. This means that around 85% of voters in Washington either didn't care or actively opposed labeling.