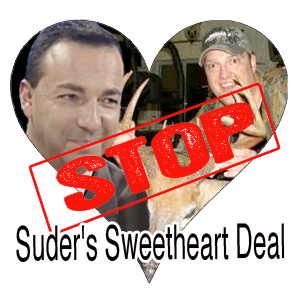 Some interesting emails were released as part of the Milwaukee Journal Sentinel's ongoing investigation of a $500,000 taxpayer grant awarded to the Koch-tied United Sportsmen's group. The grant was tailor-made for United Sportsmen and slipped into the budget by State Representative Scott Suder as one of his last acts as a state legislator. (Suder, who also served as ALEC's Wisconsin State Chair, was given a new job at the Public Utilities Commission and a $45,000 pay raise by Governor Scott Walker.)

United Sportsmen of Wisconsin (USW) is a relatively new group that spent more money defending Scott Walker in the recall election than on deer licenses, and more money lobbying for a four mile, open-pit iron ore mine that threatens to shut down a large swath of state forest, than educating people about hunting.

After the Journal Sentinel reported on the sweetheart deal for this little-known group, CMD/PRwatch uncovered the organization's deep ties to David Koch's Americans for Prosperity and the Tea Party. United Sportsmen's website was registered by an AFP staffer, the group coordinated with AFP to send misleading mailers in advance of the 2011 recall elections, and AFP and United Sportsmen co-sponsored a "Freedom Fest" party in advance of the 2012 elections featuring Republican politicians and right-wing personalities. Luke Hilgemann, Suder's former Chief of Staff, until recently headed the Wisconsin chapter of AFP and now is #2 at the national organization. CMD also uncovered how the United Sportsmen Board was populated by right-wing apparatchicks, including John Keegan, head of the Sauk County Tea Party, and Annette Olson, the Americans for Prosperity "Activist of the Year" for 2012 and leader of the Tea Party groups Women United for Liberty and Uninfringed Liberty.

The Journal Sentinel also reported that the group "misled" law makers about its non-profit charitable status. The ensuing outrage over the blatant cronyism prompted Walker to rescind the grant September 5th, but Suder still has his plum job.

Today the paper reported that Suder went on a weekend fishing trip with the United Sportsmen crowd after engineering their grant. Without irony Suder reports to the paper that there was nothing improper going on, because he paid for his own trip: "I am well aware of the ethics rules," says Suder. Suder previously told the paper that he had no idea that Luke Hilgemann was going to be a beneficiary of the $500,000 grant, but as the emails show, Suder remains in close contact with Hilgemann (who signed off on one email as "a proud hunting mentor, USW board member and a passionate conservationist.") The emails reveal the close ties between USW, NRA lobbyists and Gogebic Taconite mining lobbyist Bob Seitz, who was recently in the Capitol attempting to close the forest surrounding the mine to Wisconsin sportsmen and others.

What were these Tea Partiers seeking to return to the taxpayers for all that money?

An August 28 email from Hilgemann, regarding the bad press from the paper and CMD (and sent one day after CMD's article), lays out some of the strategy. "Let me be as direct as I can with this recent attention to USW... BRING IT!"

He continues: "PRwatch isn't attacking George Meyer, the waterfowl association, or any other outdoor group in Wisconsin because while they may be doing good work, they aren't having an impact on public policy like USW is."

"They know if we're successful with educating and exposing a new generation of soccer moms and their children to the outdoors and the sporting pursuits, that will eat away at their base and they won't be able to perpetuate the lies and scare tactics they've used on the groups anymore."

So there you have it, Hilgemann and the gang who couldn't shoot straight (or bother to get a license for bear hunting) want to appeal to soccer moms and kids to grow the Koch political base and they want Wisconsin taxpayers to pay for it. 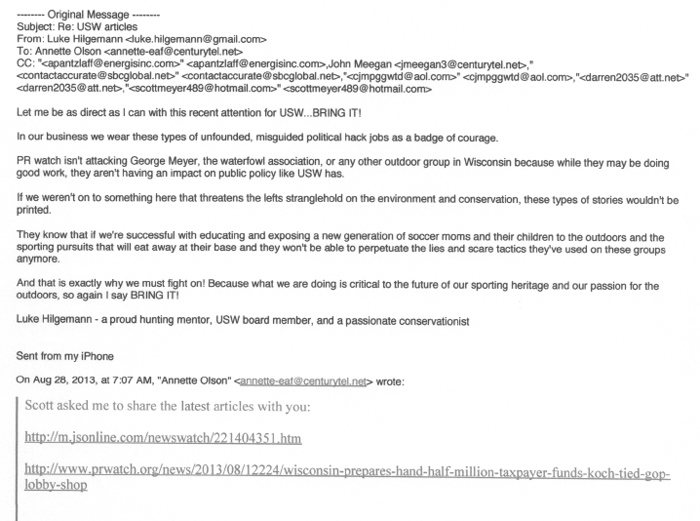