For his ten guilty pleas, Manning can face up to 16 years in prison. But the 12 additional charges could send Manning to jail for the rest of his life. Although he is charged with "aiding the enemy," a capital offense, prosecutors will not seek the death penalty. While Manning's actions were in defiance of U.S. government secrecy, his trial will be almost completely shrouded in it. 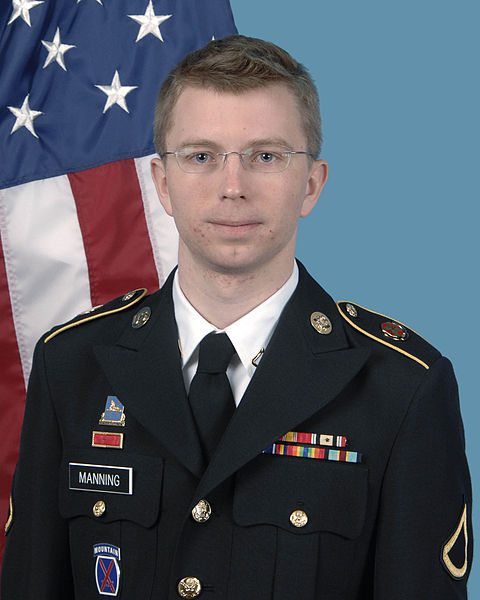 Court documents are being withheld and redacted and pretrial hearings have been closed off from public view. It is estimated that 30% of the trial's proceedings will be conducted in secret to protect witness identity and national security information. Other, more ridiculous secrecy measures have also taken place. Photographers are denied a clear shot of the defendant and his supporters were forced to turn their pro-Manning t-shirts inside out.

The government has even refused to provide transcripts of the proceeding. In response, the Freedom of the Press foundation attempted to hire stenographers to attend the public portions of the trial in order to give the world the most accurate possible picture of the events. This measure was denied at first but the government relented after a few days.

This level of secrecy at trial is not surprising if one examines the history of the case. After being arrested, Pfc. Manning was held in solitary confinement for 11 months at the Marine Corps base in Quantico, Virginia under conditions which led the UN Special Rapporteur on Torture to say that the U.S. government was guilty of cruel, inhuman and degrading treatment.

While Manning was locked away, the government gave minimal access to his lawyers and other concerned groups. In May 2012, the Center for Constitutional Rights filed a petition for extraordinary relief filed with the Army Court of Criminal Appeals, and a subsequent writ-appeal filed with the Court of Appeals for the Armed Forces, arguing that the First Amendment ensured public and press access to the government's motion papers, the court's own orders, and transcripts of proceedings, which had remained hidden from view. The petition was denied in a 3-2 decision.

A letter signed by more than 40 news organizations was sent to Pentagon General Counsel Jeh Johnson claiming that less access was given to reporters in the Manning case than cases involving Guantanamo Bay detainees.

This begs the question of the appropriate level of secrecy in such a high profile case. The 6th Amendment demands that "in all criminal prosecutions, the accused shall enjoy the right to a speedy and public trial." Military law generally requires a trial within 120 days. The court martial of Bradley Manning is certainly a criminal trial, yet the military is allowed to deny access to significant portions of it. This has led some to question the constitutionality of the proceedings.

According to the Rule of Court Martial 806, the 6th Amendment guarantee of a public trial is preserved but is "not absolute." Closure is possible if, (1) there is a substantial probability that an overriding interest will be prejudiced if the proceedings remain open; (2) closure is no broader than necessary to protect the overriding interest; (3) reasonable alternatives to closure were considered and found inadequate; and (4) the military judge makes case-specific findings on the record justifying closure. But why do we accept this watered down version of the Sixth Amendment for members of the military accused of crimes? The Sixth Amendment exists in order to protect defendants from "malicious prosecutions, corrupt judges and dishonest jury members." Military service men and women are as deserving of these protections as everybody else.

Military judge Army Col. Denise Lind, who also presided over the closed pretrial hearings, has denied public access to testimony by some of the 24 witnesses in order to protect "classified information." Defense lawyers offered alternatives to closing public accesses, but Judge Lind found those alternatives to be insufficient to guard the overriding interest of secrecy. Others have argued that Judge Lind's confidentiality measures are designed to "minimize distractions and maintain law-and-order." Eugene Fidell, who teaches military law at Yale Law School stated "people do occasionally act out in courtrooms, both spectators or witnesses or the accused, but I'm sure that the Army knows how to maintain order, and I'm not sure that it's necessary to do it with as heavy a hand as seems to be implied here."

What is the Government Afraid Of?

Even if we accept that criminal cases in military courts can be closed more easily than civilian courts, it does not appear that there is strong justification for closure in the Manning trial. Chase Madar of The Nation, pointed out seven myths that have surrounded Manning's release of sensitive documents, his prosecution, and the media's coverage of these events. He reports the fact that none of the documents Manning released were "top secret." In fact, "more than half of the diplomatic cables are not classified in any way, and neither was the infamous helicopter gunfight video that shows an Apache gunship slaughtering a dozen Iraqis, including two Reuters news agency employees."

Secondly, Madar asserts that there is no evidence to prove that Manning's leaks resulted in the death of any American or damage to national interests. If the information released by Manning was not so secret and did not result in any destruction of American lives or interests, why must his trial involve evidence so secret that it warrants public closure?

The government can always offer the same line of national security interests to justify keeping the public blissfully ignorant of the crimes it commits. The same argument was proffered by the government to stop the release of the Pentagon Papers which included explosive revelations about the U.S. war in Vietnam. The release of the papers did no harm to American interests, but rather informed people of the crimes perpetrated in their name and the lies told to the public by the administration of Lyndon Baines Johnson.

First Amendment law expert Floyd Abrams, who represented the New York Times in the Pentagon Papers case and Yochai Benkler of Harvard Law School, wrote about the significance of the Manning trial for whistle blowers in America in a Times op-ed entitled "Death to Whistle-Blowers?"

If found guilty on serious charges, "the prosecution will establish a chilling precedent: national security leaks may subject the leakers to a capital prosecution or at least life imprisonment," the two wrote. "Anyone who holds freedom of the press dear should shudder at the threat that the prosecution's theory presents to journalists, their sources and the public that relies on them."

The Freedom of the Press Foundation continues to provide crowd-funded professional stenographers for the Manning trial. Learn more here and access the transcripts here. Also related to this story CMD's SourceWatch articles on Wikileaks and Julian Assange.