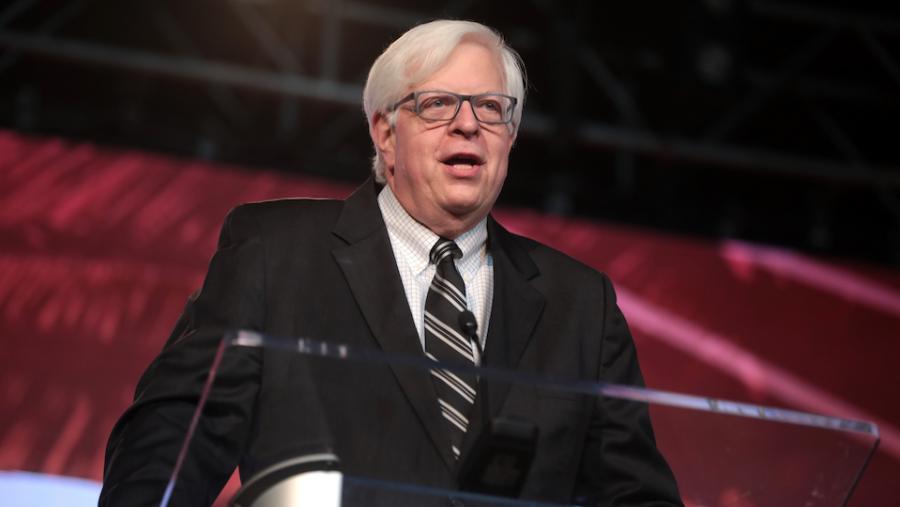 Known as a right-wing radio host on 500 stations, Dennis Prager also founded and is president of the Prager University Foundation, which churns out dozens of videos a year on right-wing topics. According to new filings reviewed by the Center for Media and Democracy (CMD), Prager University saw its revenue more than triple in the aftermath of Trump's election as president, increasing from $5.42 million in 2016 to $18.6 million in 2018.

The group's stated mission is to promote "the Judeo-Christian values on which America is founded: free speech, free enterprise, a moral foreign policy, and the rational case for God's existence," and counter what it sees as "the Leftist indoctrination imposed by schools and universities."

While Prager claims to not be a Trump promoter, PragerU's videos track many of his positions and his denunciation of mainstream media, and PragerU was invited to Trump's Social Media Summit last July.

Prager claims one billion video views per year from the unaccredited PragerU, as it is popularly known, and he describes the organization as hosting "the most viewed conservative site in the world."

The videos are produced with funding from an array of right-wing big donors, including more than a million dollars from the Lynde and Harry Bradley Foundation; DonorsTrust, the ATM of the Koch political network; Koch ally Lee Roy Mitchell; funders affiliated with Sheldon Adelson; and Dan and Farris Wilks, a pair of fundamentalist billionaires who made their money in hydraulic fracking; as well as 130,000 smaller donors.

Although organized legally as a charity, the Los Angeles Times found that "PragerU consistently spends more on Facebook advertising than major political campaigns and national advocacy groups. It ranks among the 10 biggest political spenders on the platform."  Indeed, its 2018 tax filing shows that the group spent $1.2 million on Facebook, and another $612,000 on Google.

The videos cover wide-ranging social and political topics from what distinguishes the "Left" (bad) to Liberals (capable of good), the need to rein in public employee unions, how voter suppression is a myth, all of the way to multiple videos on how men can regain their masculinity.

Mother Jones reports, "At PragerU, police are not biased against black men, and man-made climate change is debatable. You’ll find takes on animal rights (against), the $15 minimum wage (against), the gender wage gap (doesn't exist), and why the South turned Republican (nothing to do with race)."

Some of PragerU's more controversial videos, such as "Playing the Black Card," "The Suicide of Europe," and "Are Some Cultures Better than Others," have been criticized by the Southern Poverty Law Center as "dog whistles to the extreme right."

PragerU sponsors a show by former Turning Point USA Communications Director Candace Owens. Owens was pushed out of Turning Point USA, a conservative nonprofit targeting students, "after many campus chapters called for her resignation following her statement that Hitler was an OK leader until he tried to take his message global," CMD reported.

$1 Million in PragerU Payments Go to Founder and His Son

CMD's analysis of PragerU's 2018 tax filing reveals that the tax-exempt organization paid Dennis Prager and his son David close to $1 million between 2015 and 2018.

In 2018, Dennis Prager is listed as the group's president for the first time, triggering an IRS requirement to disclose that Dennis had a personal interest in large payments to two consulting firms, one owned by him and one owned by his son. PragerU paid $237,500 that year for the consulting services of Dennis to Kansas & Brooklyn, which he owns, and $155,700 for the consulting services of David to his Palm Tree Consulting firm.

Correction: This article previously stated that David Prager is Dennis Prager's brother when in fact he is his son.

David Prager is not his brother. It's his son. And that number isn't even true. Do you idiots fact check when you write this nonsense?
"police are not biased against black men, and man-made climate change is debatable." These are not controversial positions in the least. Stats show that you are more likely to be shot if you're a white guy, and man-made climate change, formally known as "global warming" is certainly debatable. This whole article sucks.