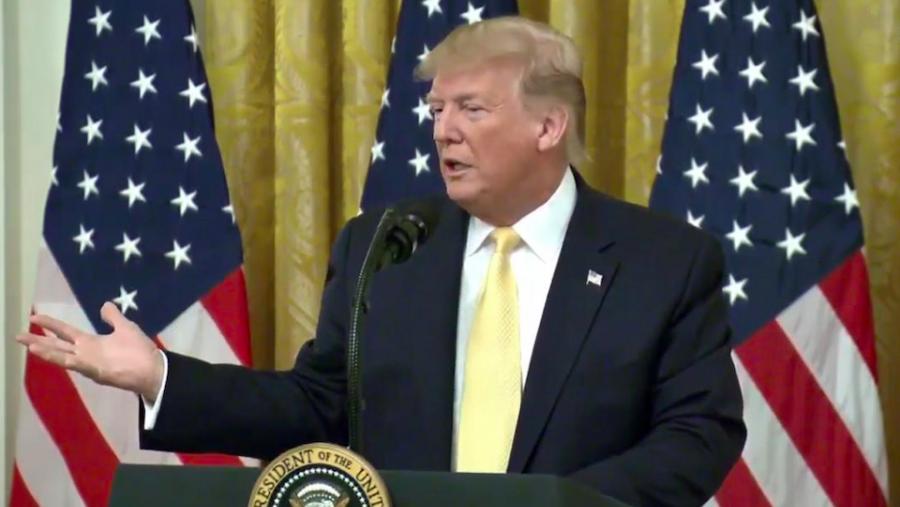 by David Armiak and Arn Pearson

Many of the same social media influencers who attended Trump's "Social Media Summit" on July 11 have rallied to defend his racist attacks against U.S. Representatives Alexandria Ocasio-Cortez (NY-D), Rashida Tlaib (MI-D), Ayanna Pressley (MA-D), and Ilhan Omar (MN-D). And a number of them are bankrolled by the Kochs, the Bradley Foundation, and other large right-wing foundations.

In a tweet July 14, Trump called for the minority freshman lawmakers, fierce critics of his policies, to "go back and help fix the totally broken and crime infested places from which they came." All four are American citizens, and three of the four were born in the United States.

Since then, Trump has doubled down on the attacks, saying the lawmakers "hate our country," and did nothing to abate chants of "Send her back!" at a recent campaign rally in North Carolina.

In the face of widespread outrage, Trump's friends from the Summit have gone out of their way to justify his actions.

The Heritage Foundation condemned Trump's comments, but also suggested that he made them out of love for the country and that the "destructive and divisive nature of the rhetoric of the members of Congress in question" was to blame.

And Will Chamberlain's Human Events published a piece arguing that there's a double standard at play because Trump's targets aren't white, claiming that "Ilhan Omar...really is a danger to the U.S.," and concluding that Trump's chanting supporters can't be blamed "for wanting to protect America."

Although the mainstream media has done a good job of covering Trump's inaugural Social Media Summit and his racist attacks, there has been very little reporting on who bankrolls this online echo chamber of right-wing, anti-immigration, and white nationalist pundits.

The Heritage Foundation has been one of the top supporters of Trump's anti-immigration push on the right.

The Sarah Scaife Foundation is a major source of revenue for the Heritage Foundation, providing the group with at least $18 million since 1985. The foundation also funds a number of other anti-immigrant and anti-Muslim organizations, including the Center for Immigration Studies and the David Horowitz Freedom Center.

Billionaires Charles and David Koch and their partners in Stand Together (formerly known as the Seminar Network) have given over $5.7 million to Heritage since 1998 through their various family foundations, and the Koch network's preferred donor conduit duo of DonorsTrust and Donors Capital Fund has chipped in another half million since 2010.

The Milwaukee-based Lynde and Harry Bradley Foundation has provided at least another $5.9 million to Heritage since 1998 and the Mercer Family Foundation, run by one of the "blow-it-all-up billionaires" behind Trump's rise to power, Rebekah Mercer, has given at least another $1 million since 2015.

Heritage generally steers clear of the xenophobic language prevalent among other Trump influencers. Heritage researcher Jason Richwine, coauthor of a controversial report concluding that allowing illegal immigrants a pathway to citizenship would cost taxpayers trillions, resigned from Heritage when it became public that he had argued in his Harvard dissertation that, "The average IQ of immigrants in the United States is substantially lower than that of the white native population, and the difference is likely to persist over several generations."

Brent Bozell's MRC operates "NewsBusters," a site that claims to be "documenting, exposing and neutralizing liberal media bias." It has a section entitled "Trump Coverage Studies" that attempts to refute mainstream media stories on Trump.

Bozell was a fierce critic of Trump prior to the 2016 election, but since repeatedly attacked the press for criticizing the president.

Project Veritas, a 2015 grantee of the Trump Foundation, is run by James O'Keefe, a right-wing activist and provocateur who uses deception and manipulative editing in his "investigations."

Due to O'Keefe's methods, Project Veritas has been plagued by legal issues over the years, and the group is barred from seeking donations in Florida, Maine, Mississippi, Utah, and Wisconsin.

Project Veritas's funders are difficult to identify as the group receives the majority of its funding through donor conduits. DonorsTrust and Donors Capital Fund have given the group over $4.8 million since 2011.

O'Keefe has been criticized for associating with radical white nationalists for years and has appeared on InfoWars -- conspiracy theorist Alex Jones' infamous radio show denounced by ex-staffers as a "den of racism and harassment" -- multiple times. After InfoWars was removed from social media platforms for promoting violence and hate, O'Keefe tweeted, "InfoWars targeted, taken off social media. These tech companies' practices are opaque and given their power must be made more transparent. We will expose the entire rotten tech machine."

InfoWars has also hosted Patrick Casey, the leader of the white nationalist group Evropa, which helped plan the deadly Unite the Right Rally in Charlottesville, Virginia in 2017. Evropa has since rebranded itself as the American Identity Movement.

Prager University, a social media video project of Dennis Prager and an attendee at the Trump Summit, has been banned and/or restricted on YouTube, Facebook, Spotify, and Twitter for providing a platform for hate speech.

Anti-Semitic Owen Benjamin, anti-LGBT Steven Crowder, and former Turning Point USA Communications Director Candace Owens have all contributed to Prager University. Owens left Turning Point USA after many campus chapters called for her resignation following her statement that Hitler was an OK leader until he tried to take his message global.

In studying Prager University, the sociologist Francesca Tripodi writes that Prager's project creates "a dense network of extremist thinkers" that "allows for those who identify as mainline conservatives to gain easy access to white supremacist logic."

Prager University has received at least a million dollars since 2010 from the Bradley Foundation. Bradley internal documents examined by CMD show that Bradley funds Prager for its strong reach across social media platforms and because it "distills (conservative/Judeo-Christian) principles into content-rich, entertaining five-minute video 'courses' taught by public intellectuals, many of whom are Bradley Prize winners."

Charlie Kirk's Turning Point USA has a history of racism that extends beyond former employee Candace Owens. The group's former chapter president at University of Nevada, Las Vegas used racial epithets and exclaimed "white power" while hugging another individual who shouted "we're going to rule the country" and "fuck the niggers" in a video that went viral earlier this year.

Kirk also named Kyle Kashuv, widely known for his racial slurs, to be Turning Point USA's high school outreach director. Kashuv resigned from the post when he was outed by a former classmate who said he "used the N-word frequently," ranked women's attractiveness by race, and referenced his "Jewish slaves."

TPUSA has received funding from 4 different groups that the Koch Brothers fund: https://www.ibtimes.com/political-capital/who-funds-conservative-campus-group-turning-point-usa-donors-revealed-2620325 (note: the author seems to have missed that Reason Foundation and Foundation for Individual Rights in Education are also Koch funded). They also host events attended by Koch-funded pundits like Ben Shapiro, Jordan Peterson, Dave Rubin, etc
Hi Lamont, Thanks for your comment. We define Koch-funded as directly from the wallet of Charles or David Koch so individual donations from these two, money from their family foundations or institutes, money from Koch Industries or other Koch run political organizations. Money to TPUSA from Reason or FIRE could be from the Kochs, but it could also be from another individual. Therefore, we consider contributions like these Koch ties.