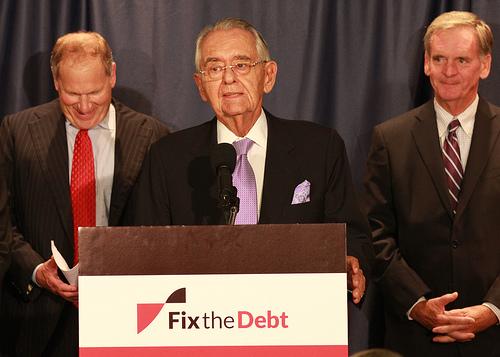 An odd couple made an appearance on the University of Wisconsin-Madison campus recently: Tea Party Senator Ron Johnson and Madison's progressive Congressman Mark Pocan. The two were invited to participate in a conversation about the national debt hosted by a local student organization and a bevy of national groups, including the Comeback America Initiative, the Concord Coalition, the Can Kicks Back, and the Campaign to Fix the Debt. On the agenda: debt, deficits, and the economy.

Platitudes abounded: "Your share of the federal debt is about $52,000," said one. "We can't kick the can down the road," said another. It was all very earnest and the press clips were positive for what was, by all accounts, an exceedingly boring event.

But the most telling sentence of the meeting was one of the first. The student sponsors thanked Mark Graul and Stephanie Kundert of Arena Strategy (a local PR firm) for their help in setting up the event.

No one in the room appeared to catch the fact that they all were participating in an elaborate public relations ruse, set up by well-known Wisconsin spinmeister (Graul) whose claim to fame is a racist attack ad on a sitting judge, and orchestrated by a Wall Street billionaire whose name was never mentioned in the two-hour "teach-in."

Take a bow, Pete Peterson -- $500 million can buy you a lot of good feelings and positive press.

The media in advance touted the event without looking deeper. Clips the day after did the same. Nary a mention of Peterson or his vicious austerity agenda which will slash government spending, kill jobs, condemn students to higher rates of debt and make it much harder for graduates to succeed.

Peter G. Peterson is a former Nixon man turned Wall Street billionaire who has spent $500 million in five years to underwrite numerous organizations and PR campaigns to generate public support for slashing Social Security, Medicare, and Medicaid, citing concerns over "unsustainable" federal budget deficits. In 2007, he made a fortune from the public offering of the private equity firm he co-founded, Blackstone Group, and pledged to spend $1 billion to "fix America's key fiscal-sustainability problems." He endowed the funds to the Peter G. Peterson Foundation, which he launched in 2008 to bankroll the endeavor.

The Madison event was shepherded by David Walker of the Come Back America Initiative (CAI). Who is Walker? Well, you can read all about him here, but the most important thing you need to know is that he has been on the Peterson dole for a very long time. He served as the head of the Peterson Foundation from 2008 to 2010. Then he spun off the more "grassrootsy" CAI to take the show on the road, funded by Peterson to the tune of $3 million. CAI is one of the many Peterson-funded "partner" organizations to Fix the Debt.

What is Fix the Debt? The Campaign to Fix the Debt is a $40 million "astroturf supergroup" that CMD exposed in a series of articles on the cover of the Nation magazine in February 2013. The effort involves over 120 CEOs all singing from the same "shared sacrifice" hymnal, but their association with the campaign has stirred outrage and protests because too many of the firms involved pay a negative tax rate or underfund their employee pension plans, yet their CEOs have the gall to call for cuts to vital "earned-benefit" programs lifting millions of seniors and kids out of abject poverty. Fix the Debt was launched on the Peter G. Peterson Foundation website, Peterson was at the National Press Club launch of Fix the Debt, and Peterson gave Fix the Debt's original parent organization some $5 million to get the project rolling. 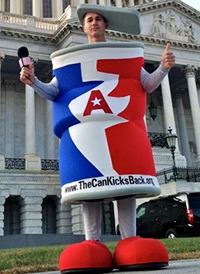 What is The Can Kicks Back? For many years, Peterson has tried to create the fantasy that students are more concerned about the nation's debt than their own. Thus, he has consistently tried to fund or create student groups to carry his message. The latest incarnation is The Can Kicks Back, a laughable effort to start student "chapters" at colleges and high schools in target Congressional districts. A key strategy? A foam can mascot and videos of Alan Simpson rocking out "Gangnam Style." This week those crazy kids at the Can Kicks Back bought themselves a flashmob. As the Huffington Post first reported, they paid dozens of dance students $65 bucks to pretend that deficit reduction was a cause that had them dancing in the streets. The group says it is the "millennial arm" of Fix the Debt, but could be better labeled Peterson's pet propagandists.

What is the Concord Coalition? The deficit reduction group was cofounded by guess who? Peterson and others. In recent years it has received some $6,036,060 (including $1,500,000 in matching funds) from the Peterson Foundation from 2009 to 2012. And its job is to take the Peterson message to the heartland with national deficit reduction tours and more "grassroots" confabs.

When we talked to the Bipartisan Issues Group, the local student group that hosted the event, they seemed entirely unaware of any of these connections and only vaguely aware of a fellow named Peterson. That is just the way Peterson and Fix the Debt like it. Fix the Debt PR firms in some 23 states, tap bipartisan community leaders (Scott Klug and Tony Earle here in WI) to announce that new chapter has spontaneously erupted, they set up "grassroots" events, and make sure serious interviews and op-eds are placed in mainstream media outlets. They tout their 350,000 petition signers, never mentioning they paid a petition site for most of the names and fell wildly short of their 10 million goal.

While Fix the Debt owes a lot to the ghost in the machine, Peterson's name is rarely mentioned. Fix the Debt's spokesperson even told CMD that Peterson did not fund his organization two months after he told the Huffington Post the opposite, and the group is reincorporating and splitting from its fiscal sponsor perhaps in an effort to hide the Peterson start-up funds. (See my colleague Lisa Graves' very funny "Conversations with Fix the Debt.")

Alan Simpson and Erskine Bowles, the two co-founders of the Campaign to Fix the Debt, have been on the Peterson plan for a while now. They have their own $300,000 "Moment of Truth" project funded by Peterson, named after their big $4 trillion austerity package they cooked up in 2010 as chairmen of President Obama's national commission on debt. The economists at EPI estimated that steep cuts in the package would put some 4 million people out of work.

A few weeks ago, the duo issued a new austerity plan that manages to screw the very students Peterson is hoping to attract. It would reduce the federal debt by some $55 billion by allowing interest on student loans to start accruing while student are still in school, not upon graduation. The plan makes other changes that hurt students and calls for increasing the student loan interest rate. On the flip side, it would increase the debt by creating a "territorial tax system" that would allow overseas earnings by U.S. firms to be exempt from taxation. No wonder Fix the Debt has so many CEOs flocking to its cause.

This plan has been lauded by the Campaign to Fix the Debt and by extension The Can Kicks Back, but do college students really think it's a good idea to increase the already $1 trillion in student loan debt in order to provide further corporate tax breaks?

They weren't allowed to weigh in on the issue because the issue was never presented at the UW "teach-in."

The Peterson Crowd is Losing the Debate

Also not discussed at the presentation, were recent developments that show that deficit scolds are loosing the debate. The empirical foundation for budget cuts, the Reinhart-Rogoff study on debt in 40 nations, was blown out of the water by a graduate student who found huge errors in their data. This week, private-sector and government economists have determined that unemployment would be a full point lower and U.S. growth would be two points higher had not Obama and the Republicans agreed to steep spending cuts in 2011. Austerity is exactly the wrong prescription during an economic downturn.

All in all, it was a masterful job by the Peterson puppets, another event that Fix the Debt will likely put on a list and send to Congress and the press as proof of a grassroots groundswell for a grand bargain on "entitlement reform," when all the polls show that the opposite is true. By huge margins Americans of both parties oppose pretty much everything Peterson and Fix the Debt stand for: 73 of American's believe protecting Medicare and Social Security from benefit cuts is more important than bringing down the deficit. Fully 84 percent opposed reducing Social Security benefits; 69 percent opposed reductions in Medicaid benefits.

And it is very hard to believe that with deficits in steep decline, America's college students are willing to embrace more student debt to help Pete Peterson and his puppet populists.

In February 2013, CMD and the Nation issued a special edition on Fix the Debt, which you can read here. We also created a large wiki on all the Fix the Debt CEOs, board members, partner organizations, lobbyists and more at Petersonpyramid.org. CMD's Harriet Rowan contributed to this article.