Beautiful spring weather has gardeners outside seeding lettuce and transplanting tomatoes. Community gardens are ramping up for a growing season full of hot peppers and trailing squash vines. The sewage sludge "composting" industry wants in on the action. May 6 to May 12 has been declared "International Compost Awareness Week" by the sewage sludge industry trade group the U.S. Composting Council (USCC). 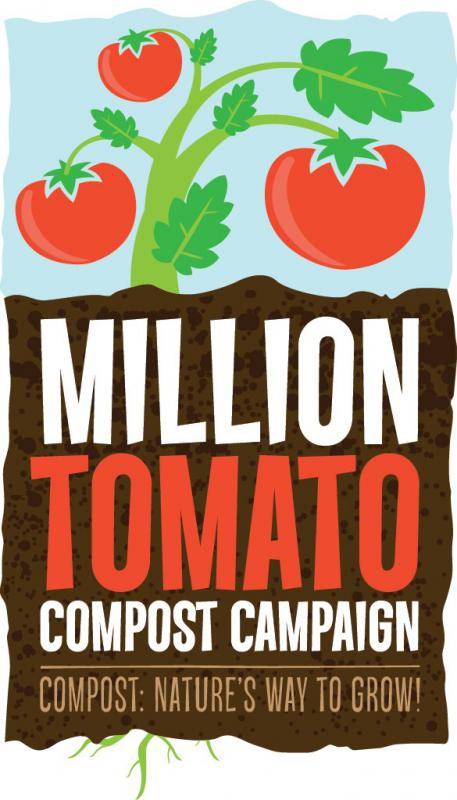 According to the campaign website, Buy-Compost.com, "USCC's STA certified compost producer members will donate STA-certified compost to participating community gardens who sign on to the Million Tomato Compost Campaign. Community gardens will use their compost to grow one million tomatoes, either for their own use or for donation to local food banks. Chefs will work with the community gardeners, schools and nonprofits to teach people about using sustainably grown local food in recipes that even kids will love!"

It all sounds great -- community gardens, tomatoes, chefs, food banks, kids, even great graphics. What's not to love? Perhaps it's the sewage sludge.

Of the dozens of producers in almost all 50 states that participate in the USCC's STA program, at least five are known to use industrial and residential sewage sludge in their products: A-1 Organics, EKO Systems (one of whose plants was producing 3,090 dry tons of sewage sludge product a year as of 2010), Synagro (the largest processor of sewage sludge in the United States), WeCare Organics, and the Inland Empire Regional Composting Authority (the Los Angeles area sewage treatment facility, sewage sludge from which is also used in products like those from Kellogg Garden Products).

These products are some of the sewage sludge products known to be sold by corporations and municipalities. To dispose of sewage sludge produced by wastewater treatment plants, the industry and the U.S. Environmental Protection Agency (EPA) have renamed them "biosolids" and dubbed them as "green" examples of recycling, beneficial reuse, and organic fertilizer and compost products. In many cases, the sewage sludge is then packaged as compost or fertilizer and sold to unsuspecting gardeners or farmers.

The paragraph above, from a May 2013 letter about the Million Tomato campaign, specifically does not answer the question posed: "Does compost contain toxic sludge?" It is designed to reassure ("tested by independent laboratories"; "STA certified compost") without saying much of anything. Here's the story behind the spin:

The STA program, which was developed in 2000, requires regular testing of "compost" products by certain approved labs. The testing is relatively minimal, and the standards are designed to allow for certification of products containing sewage sludge. The test methods used were originally designed by Procter & Gamble in the 1990s.

Composts in the STA program are allegedly tested for pH, soluble salts, nutrient content (total N, P2O5, K2O, Ca, Mg), moisture content, organic matter content, bioassay (maturity), stability (respirometry), particle size (report only), some pathogens (fecal coliform and Salmonella), and the trace metals arsenic, cadmium, chromium, copper, lead, mercury, molybdenum, nickel, selenium, and zinc. Additionally, according to the USCC, "any and all testing required by applicable State and/or Federal regulation (e.g., pathogens, heavy metals, pesticides, inerts, etc.) to assure public health/safety and environmental protection must be completed at the frequency so regulated." But the EPA has worked with the sewage sludge industry to overhaul testing and regulations to allow for the spreading of sludge on food-growing soil and spin its image to that of "beneficial reuse" rather than hazardous waste handling.

In addition to the items listed above, sludge contaminants can include flame retardants (which California recently listed as a carcinogen, or cancer-causing agent), antibacterial agents like triclosan, phthalates (the solvent that gives vinyl plastic the nickname "Poison Plastic") and other industrial solvents, nanosilver and other nanomaterials, endocrine disruptors, pharmaceutical residues, resistant pathogens, and perfluorinated compounds. Some of these contaminants can "bioaccumulate" in plants grown in sludge-contaminated soil and remain as residue on vegetables in contact with the soil. These plants can then eaten by children and adults.

The USCC launched its "Million Tomatoes" campaign the day before Earth Day, on April 21, 2013, according to an email from STA Program Manager Al Rattie. It was featured on New York NPR the day before its launch and on Good Morning America on Earth Day itself, Monday, April 22.

The campaign has been featured on gardening news websites and environmental blogs. The sustainable food organization for chefs -- Chefs Collaborative -- even published a guest post by the USCC's then-executive director, Michael Virga (who moved on shortly afterwards) about the campaign.

Articles were also published in BioCycle Magazine, a publication serving the interests of the sewage sludge industry that recently became the official magazine of the USCC. BioCycle has published articles like Sally Brown's 2010 piece calling the Center for Media and Democracy (CMD) and its allies "ecoterrorists" because of the successful movement that on March 4, 2010 stopped the San Francisco Public Utilities Commission from giving away sewage sludge as "organic biosolids compost" for home and school gardens.

Rattie bragged in an email to supporters, "Millions of consumers watched and heard the Million Tomato Campaign story," between NPR and Good Morning America.

Millions of consumers need to know what's in that free "compost" growing all those tomatoes.

This is a fabulous piece of work from the Michael Crichton school of journalism: mix in some incontrovertible facts and weave in some plausible theory, all designed to suspend disbelief in the reader. Of course this type of story is always better if you disregard inconvenient truths: the overwhelming number of USCC members do not handle sewage sludge and are working every day to provide sustainable options for society; Kellogg Garden Supply does not use sewage sludge in their products; using compost in community gardens, particularly in urban "food deserts" across the country will help promote healthy eating that may even save or extend lives. The whole premise this hit piece lies in the potential for sewage sludge to alledgedly contain a host of chemical contaminants. It would better support the author's cause to provide links to actual studies showing that these substances are actually present in the compost products, instead of other spurious articles. Maybe this Sally Brown is right.
"Born Skeptic," Nothing in the article suggested that there are not also USCC members that do not handle sewage sludge. Nothing in the article suggested that using real compost made from clean organic materials is not an excellent idea in community gardens and elsewhere. What makes you say that Kellogg Garden Products does not use sewage sludge in its products? Do you work for Kellogg? If so, I would love to speak with you about it. If it no longer does, that is excellent news. Its own website previously confirmed its use, and a case study by a third party points out that Kellogg's brand was built on using sewage sludge in its products: https://www.sourcewatch.org/images/4/43/KelloggBrandcasestudy.pdf. You use the words "potential" and "allegedly" to suggest that there is little or no risk for sewage sludge to contain a host of chemical contaminants. The EPA's testing and regulation of sewage sludge products is problematic at best, but even the EPA's Targeted National Sewage Sludge Survey in 2009 concluded that ALL sewage sludge contains toxic and hazardous materials, including large numbers of endocrine disruptors: https://www.sourcewatch.org/index.php/TNSSS. CMD has been reporting on sewage sludge for many years, and each PRWatch article cannot contain the decades of scientific research showing the problems with its application to soil, but many of those studies can be found on our sister wiki site, SourceWatch, here: https://www.sourcewatch.org/index.php/Scientific_Studies_of_Sewage_Sludge. Looking forward to continuing the conversation, Rebekah Wilce
Rebekah - Where exactly did you point out that the majority of composting facilities are handling yard waste, food waste, and any inputs besides sewage sludge? Sorry if I missed it, but the pervasive tone throughout the article does a disservice to the USCC to paint it as the sewage sludge industry trade group. While that serves your purpose - which is clearly NOT to inform, but rather provoke. I am not in favor of sewage sludge land application and was happy to hear that Kellogg's discontinued the inclusion of sewage sludge in any of their products last year. You may want to do some fact-checking prior to publishing your "article". That is not my responsibility as a reader. I am not suggesting that there is not substantial risk from the use of sewage sludge, however, when properly composted, that risk is significantly reduced or eliminated. Nowhere on your wiki site did I find any studies identifying these constituents of concern in composted material, only about Type A and Type B sludge. Like Fox News, you seem to purport that you have been "fair and balanced", which is clearly not the case. On a positive note, many thanks are due to the hundreds of composters (who are sewage sludge free)participating in this program that you have besmirched so dismissively.
Wow. This is a poorly written article that chooses to slam all that's good in our world and is spitefully written not to inform, but to scare. And I LOVE that your "references" refer to your own source watch page and not to any reliable website. Which seems to be the case in every article written by a pr watch writer. Gotta love how pr watch hurts more than it helps. Keep up the lies, they're extremely humorous.
Tomatoes will grow in almost anything. Call me when STA has had a chance to test one of those.