NPR's "The Salt" Blog Muddies the Issue of Sewage Sludge 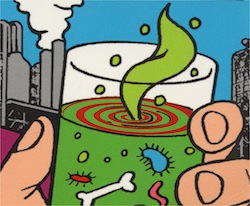 In a muddled attack on the Center for Media and Democracy (CMD) and those who are concerned about produce grown in sewage sludge, "The Salt," NPR's James Beard award-winning food blog, parroted sewage sludge industry PR and misled readers with the article "Whole Foods Bans Produce Grown With Sludge. But Who Wins?" published on January 21. The article was written in response to CMD's report on January 15 that the natural and organic foods retailer Whole Foods had agreed to develop a policy to ensure it would not sell produce grown in sewage sludge. It quotes this reporter as well as two sewage sludge promoters, but fails to quote toxicologists or epidemiologists or reference any current scientific studies about the effects of spreading sewage sludge.

"The Salt" article claims that only "a small group of activists has claimed that biosolids are toxic and full of heavy metals, pharmaceuticals and other chemicals." But in fact, the U.S. Environmental Protection Agency (EPA) found in 2009 that dozens of hazardous materials, not regulated and not required to be tested for, have been documented in each and every one of the sludge samples the agency took from locations around the country. The hazardous materials included 27 metals that were found in virtually every sample, three pharmaceuticals -- including the antimicrobial triclocarban, which FDA recently moved to regulate in soaps -- in every sample, three steroids in all samples, and all but one currently used flame retardant chemical in all samples. Although EPA has subsequently dropped the ball on sludge, respected advocacy groups decided not to ignore the warning signs.

Advocacy groups that have called for a prohibition on the land application of sewage sludge because of these contaminants include the Center for Food Safety, Institute for Agriculture and Trade Policy, Organic Consumers Association, Center for Health, Environment and Justice, Farm Aid, the Natural Resources Defense Council, and dozens of local grassroots and consumer protection groups.

"The Salt" article claims that "scientists who study sludge and waste experts say that this form of fertilizer actually delivers big environmental benefits." But the reporter apparently didn't speak with scientists like Dr. David Lewis, the former high-ranking, award-winning EPA microbiologist who challenged EPA's weak sludge regulations and with his team did the first peer reviewed groundbreaking research documenting illnesses and deaths linked to sludge exposure. His theory about how sludge exposure causes health problems has not been challenged in the peer-reviewed literature. It was confirmed by later studies by Dr. Sadik Khuder, an epidemiologist in the University of Toledo's Departments of Medicine and Public Health and Homeland Security, in an exposure study on over 600 people in Wood County, Ohio, over 400 of whom were exposed to sewage sludge. This study found statistically significantly elevated symptoms among those exposed to sludge, such as "abdominal bloating, jaundice, skin ulcer, dehydration, weight loss, and general weakness."

Other scientists who would question "The Salt" article's claims include Dr. Murray McBride, a toxicologist and soil scientist, and others at the Cornell University's Waste Management Institute, who have published extensively on the health and environmental impacts of applying sewage sludge to agricultural land; and epidemiologists Dr. Steve Wing and Amy Lowman at the University of North Carolina, Chapel Hill, who published a survey of neighbors of sludge land application sites in North Carolina, South Carolina, and Virginia, many of whom reported illness following application events, in 2013.

In fact, despite the article's insistence, the EPA no longer promotes the practice of spreading sewage sludge on agricultural land, and the scientific consensus opposes it.

For the source of "The Salt" article's claims, look to the well-funded PR companies hired by the sewage sludge industry and its lobby groups, such as the Water Environment Federation, which had a budget of well over $20 million in 2012 and which invented the PR euphemism "biosolids."

"The Salt" article does not quote any consumer or environmental advocates or any of the scientists who have published the extensive list of scientific studies CMD sent to "The Salt" reporter several days before the article was published. It does rely on industry representative Chris Peot and sludge booster Sally Brown of the University of Seattle, who has unabashedly promoted the use of sewage sludge to grow food and called those who oppose the practice "ecoterrorists."

Brown's claim, parroted by "The Salt," that people are only concerned about the land application of sewage sludge because they're uncomfortable with "poop" flies in the face of the scientific evidence documenting substantial cause for alarm.

Whole Foods should be applauded for its decision to screen out produce grown in sewage sludge from its stores and deciding to implement what many eaters, activists, and scientists would celebrate as admirable precaution.