You're probably familiar with the old "fox in the hen house" story, but what about when a hen joins the fox den? 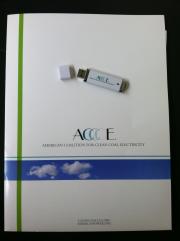 At ALEC's coal-sponsored meeting, where state legislators and corporate representatives meet to create template state laws ranging from attacks on clean energy to privatization of public schools, Indiana's Commissioner of the Department of Environmental Management Tom Easterly laid out a plan to stall the US EPA global warming action in a power point clearly addressed to coal industry representatives at ALEC's meeting.

In a USB drive branded with the logo of the American Coalition for Clean Coal Electricity (ACCCE), a folder labeled "Easterly" contains a presentation titled "Easterly ALEC presentation 11 28 12" explaining current EPA air pollution rules and how Tom Easterly has worked to obstruct them. The power points is branded with the Indiana Department of Environmental Protection seal. In the latter presentation, Easterly ended his briefing to ALEC's dirty energy members with suggestions for delaying EPA regulation of greenhouse gas emissions at coal plants.

Easterly's presentation, which is posted on his Indiana Dept. of Environmental Mgmt commissioner webpage, even offered a template state resolution that would burden EPA with conducting a number of unnecessary cost benefit analyses (which the federal government has done through the Social Cost of Carbon analysis) in the process of controlling GHG emissions.

The template resolution Easterly presented to ALEC was created by the Environmental Council of States (ECOS), a group of state regulators that create template state resolutions similar to ALEC, often with overlapping agendas that benefit coal companies. ECOS has some questionable template state resolutions for an "Environmental" organization, including a resolution urging EPA not to classify coal ash as "hazardous." Although its less regulated than household trash, coal ash contains neurotoxins, carcinogens and radioactive elements and is stored in dangerous slurry "ponds" that can leak these dangerous toxins into our waterways.

Almost too predictably, ECOS' work is sponsored by the coal fronts like ACCCE and the Edison Electric Institute (EEI), both sponsors of the ALEC meeting where Easterly presented the ECOS model resolution. See clean air watchdog Frank O'Donnell's blog on ECOS for more.

Easterly's work, including his presentation to ALEC, is also promoted by the Midwest Ozone Group, a group whose members include ACCCE, American Electric Power and Duke Energy.

Commissioner Tom Easterly's suggestion of burdening EPA with tasks beyond its responsibility is concerning, as is his ongoing campaign to discredit the science of global warming--something he doesn't have the scientific qualifications to do. To this end, the Indiana regulator fits nicely into the coal industry's long history of denying problems they don't want to be held accountable for and delaying solutions to those problems. The same processes applied to acid rain, a problem the coal industry also denied for years--check out Greenpeace's collection of Coal Ads: Decades of Deception.

Even before Indiana's top enforcer of federal and state environmental regulations was advising coal companies on how to continuing polluting our air and water, it appears that denial of basic climate science was the state's official position on global warming--Indiana's 2011 "State of the Environment" report rehashes tired climate denier arguments such as global temperature records having "no appreciable change since about 1998." (see why this is a lie) and referencing the "medieval warm period" as false proof that current temperature anomalies are normal (they aren't, see Skeptical Science for a proper debunking). Similar arguments have apparently been presented by the Indiana government to ALEC since 2008--the ACCCE USB drive contains another Indiana power point created in 2008 full of junk climate "science." This level of scientific illiteracy is concerning, especially for the regulatory body responsible for overseeing pollution controls for the coal industry.

Remember, this isn't the Heartland Institute. It's the State of Indiana....working with the Heartland Institute, a member of ALEC's anti-environmental task force that has been central in coordinating campaigns to deny global warming. See Commissioner Easterly's full presentation to ALEC on climate "science."

$15.3 million: total federal politicians and committees spending from these groups since 2007

$194 million: total federal lobbying expenditures from these groups since 2007

The collective millions spent on federal lobbying and politicians went a long way for these five coal interest groups. Their lobbying goals included weakening 2009 climate legislation and working to interfere with US EPA rules to reduce coal pollution or greenhouse gases. All five of these groups have recently lobbied to prevent US EPA from controlling greenhouse gas emissions under the Clean Air Act.

These five interests only represent a slice of the coal interests spending money in politics, and just a few players among many in the coal, oil, gas and chemical industries that dump millions of dollars into public relations campaigns telling us that climate change is not a problem.

This article was originally published by Connor Gibson of Greenpeace at PolluterWatch.com.

Politicians do what they were hired to do. There are people who COULD have voted against them, but maybe didn't, or perhaps there are not enough to defeat them. We need to do something about it. There is an easier way to participate between elections and hold politicians accountable for implementing solutions that benefit all of us. www.at10us.com
Maybe you could investigate the type of organized bullying called gangstalking and how the police and firemen are in on doing the bullying of innocent people.