Koch Carbon Kings a Driving Force Behind the U.N. Deadlock in Doha

A new report by the International Forum on Globalization details the role of David and Charles Koch in undermining international talks to address the rapidly escalating problem of climate change. As the United Nations meets in Doha, Qatar this week, the goal is to create a framework in which the governments of the world make internationally binding commitments to cut carbon emissions fast enough to keep climate change within the agreed threshold of 2C. 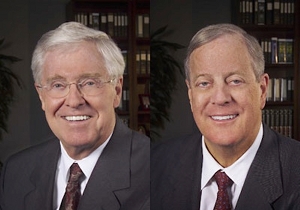 But the real decision makers are not the climate negotiators, but politicians in capitals around the world including Washington, DC. The report, Faces Behind a Global Crisis: U.S. Carbon Billionaires and the U.N, Climate Deadlock, details how Charles and David Koch's undue influence over United States climate policy has paralyzed American policy makers and stymied the United Nations climate talks.

Bloomberg's Billionaire Index recently ranked the Carbon Kings' net worth ($80.2B) as greater than that of the world's wealthiest man, Carlos Slim ($71.8B), and the Kochs are using that money to kill any chance of United States climate legislation and convince America that "energy independence" is more important than cooking the planet. The report explains how the Kochs' campaign contributions, lobbying legislators, funding climate denialists, attacking clean air laws, and stopping the shift in subsidies from fossil fuels has helped to halt any serious progress on climate policy in the United States. The result is a deadlock in addressing the global climate crisis.

"As the top spenders to stop climate policy in the planet's most polluting nation, the two oil barons from Wichita hold hostage any progress in Washington, and hence any meaningful global deal in Doha," said Victor Menotti, Executive Director of the IFG. "Advancing a UN agreement requires substantial changes in US domestic dynamics to reduce the role of the Kochs, and all private money, corrupting policy outcomes. Setting stronger standards for power plant pollution will be a litmus test."

Even though the killer storm Hurricane Sandy, which killed close to 200, pushed President Obama to promise to work with Democrats and Republicans on addressing climate change, little has been said on the topic since the election and the issue has not come up during the critical "fiscal cliff" negotiations. Internationally, the United States continues its opposition to any meaningful multilateral commitments to cut dangerous greenhouse gases that cause climate disruptions.

Meena Raman of the Third World Network and an IFG Board Member noted that, "The world cannot expect U.S. negotiators to do anything but lead a race to the bottom toward a total climate crisis as long as they speak for their oil billionaires and not for the American people. How many more must die from climate disruptions before U.S. negotiators align their position with the scientific reality that says the world needs ambitious actions to cut carbon now?"

The report is available online at Kochcash.org.

Perhaps the Koch Bros. should be forcibly kept out of negotiations entirely. Their agenda, along with that of ALEC, is BAD for WORLD POLICY. After all, we world citizens outnumber them -- they should be paying attention to what WE want and NEED.
I second that. And then turn the attention of the FBI,IRS and CIA to investigating the Koch Brothers as the largest polluter in America.