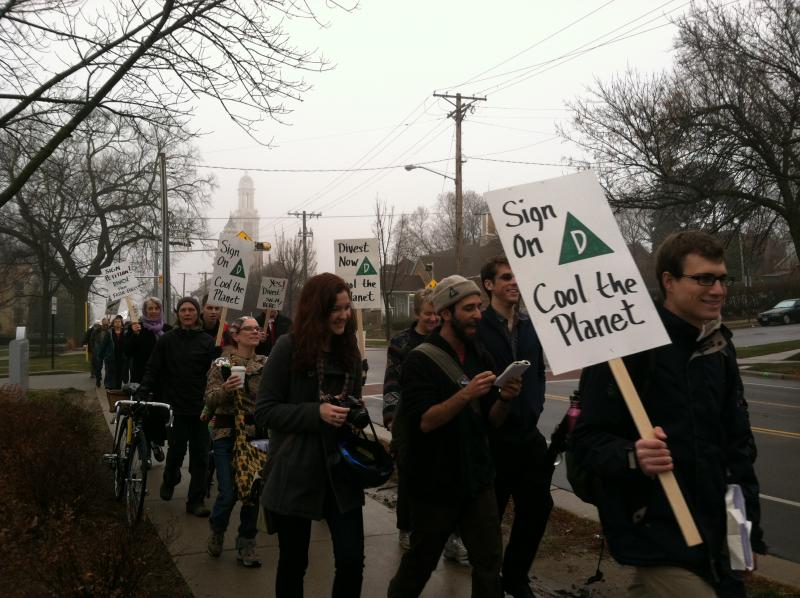 MADISON -- This morning, a group of students and alumni delivered over 1,000 signatures to University of Wisconsin Foundation President Mike Knetter demanding that the university divest its holdings from the fossil fuel industry. The activists point to science that shows the industry is slowly cooking the planet and divestment, or "hitting them where is hurts," as a moral imperative.

As the students gathered on a December day which will top 60 degrees, Elisa Collins Zinda carried her one year-old daughter strapped to her back and talked about why she was there. "I hope my daughter will be able to build a snowman some day," she said.

The effort was launched in conjunction with 350.org, a nonprofit advocacy organization spearheading a nationwide "divest now" campaign, targeting the fossil fuel industry in the same way that the South African apartheid government was successfully targeted by campaigners in the 1980s. The leader of the organization, Bill McKibben, brought his "Do the Math" tour to Madison last week to explain the divestment strategy to a sold out hall. The campaign is targeting 200 publicly traded companies, which hold the majority of the world's fossil fuel reserves. The University of Wisconsin Foundation's endowment fund has $2.5 billion in total assets. UW-Madison is one of 100 campuses across the U.S. where an active divestment campaign has been launched and the number is sure to grow.

The two-hour long teach-in Thursday night highlighted some of the most disturbing figures associated with the continued use of fossil fuels and laid out a roadmap for grassroots activists to demand divestment from colleges, universities and other community institutions.

The numbers McKibben laid out in his talk and in a recent Rolling Stone article don't look good. The earth's temperature has already raised .8 degrees Celsius, which has already been more problematic than scientists had projected. World governments agree that warming above 2 degrees Celsius would be disastrous for the planet and those living on it. If we stop increasing CO2 levels now, the temperature would still continue to rise, putting us at three-fourths this 2 degree mark. The Carbon Tracker Initiative, a team of London financial analysts and environmentalists, estimates that proven fossil fuel reserves of the industry and countries like Venezuela or Kuwait are already five times the amount that can be released to stay within that 2 degrees Celsius increase.

"That coal, gas and oil is below the ground physically, but it is above the ground economically," McKibben said. "That's what gets the share price for Exxon or Shell, when Peabody coal wants to borrow money, that's their collateral. It's going to get burned. There is no room for doubt, wishful thinking or speculation. Unless we alter the path in a fundamental way." McKibben argues that activists need to convince firms and governments that 80 percent of these reserves have to stay in the ground. 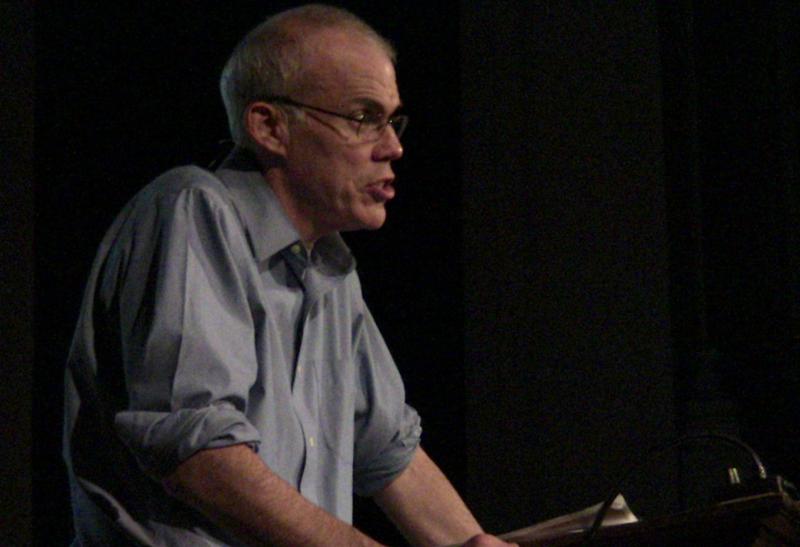 It's hard to say there is still a debate about the climate changing when even the CEO of Exxon Mobil Rex Tillerson admits it's happening. Exxon is the largest publicly traded oil company in the world. The company alone has seven percent of the reserves that it would take for us to reach that 2 degree increase, said McKibben.

"I'm not disputing that increasing CO2 emissions in the atmosphere is going to have an impact. It'll have a warming impact," Tillerson said. His comments came this past summer amidst the worst drought the U.S. had faced since 1956.

But Tillerson's solution to this problem, is a stunner. Tillerson calls the problem "an engineering problem" with "engineering solutions." The world simply needs to "move crop production areas around," he argued. When McKibben played this video clip, some in the audience gasped. The notion that American crop production (a.k.a., Wisconsin family farms) could be shifted to the tundra, did not go over well with this mid-western audience.

A study by scientists at Stanford University found that a 2 degree Celsius increase in temperature would cut grain yields by up to 20 percent. Over the record-breaking heat of the summer, corn prices on the Chicago Board of Trade, the global benchmark, increased nearly 45 percent. This would have little consequence on a fossil fuel company executive, said McKibben. But for the majority of people living around the world this can be devastating. More than one billion people in the world live on less than one dollar a day.

"If you make closer to a dollar a day, this is a very big deal. It's probably the biggest thing to happen to you this year," he said. "You are having to pay 40 percent more for the corn to make tortillas for dinner." 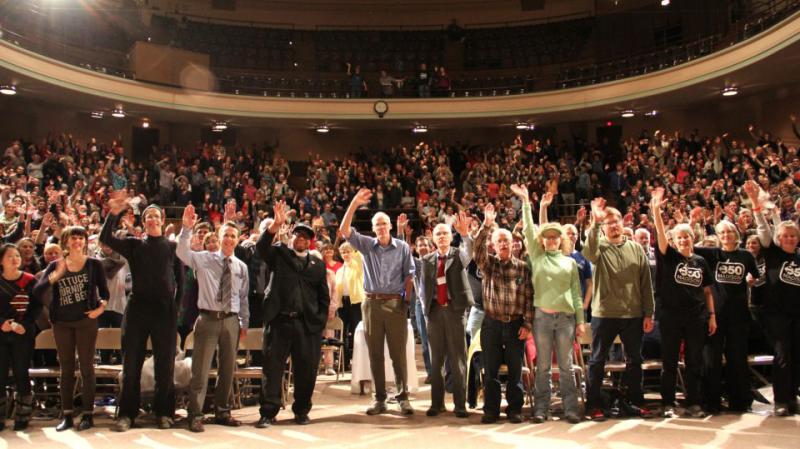 The divestment from fossil fuels is different than other corporate campaigns of the past, the speakers said. The campaigners are not asking the companies for a slight change in their business practices -- such as paying their workers higher wages. They are targeting the very core of the fossil fuel industry's business plan, threatening its position as the most profitable industry on earth. The stakes are also different -- this fight is for the survival of humanity, Rev. Yearwood, president of the nonprofit advocacy organization Hip Hop Caucus, said.

"The only possible analogy is the companies that manufacture nuclear weapons," said author Naomi Klein in a video message. "But at least those companies tell us that their weapons won't actually be used to destroy the planet -- they are just kind of there as a deterrent. Fossil fuel companies offer no such assurances. In fact, they are counting on their particular brand of weapons being used -- against your futures, against the climate, because burning carbon is the whole point of digging it up."

The only way to fight our fossil fuel addiction, she said, is to "get the pushers out of our faces." Then the U.S. can focus on changing its mindset of infinite economic growth and unlimited consumption.

Thank you for this great piece. BUT please, if you're not going to link the photos directly to the source, add credit for the photographer's photos you are using. This is a huge problem in this industry. I understand that under certain licenses you don't HAVE to but it's considerate to your readers as well if we want to see more.Thanks.
Hello, Thank you for the comment. I am not sure which picture you mean? The first two photos were taken by CMD, and the final was sent out as an email by 350.org to everyone that attended the event. Best, Sara
Isn't it strange that we, as a society, allow politicians to shape our points of view and so many positions on many matters? Fact is, they only say things that suit them adn theirs, and we aren't included in that mix. Wealth and politics have mingled - they pay huge PR firms tell them what to tell us ... I call it puppet food. So - politicians - why don't you guys just do your jobs for a change, or find new ones.
I am currently involved in the climate change movement and am a veteran of the 1980s South Africa divestment movement. After years of study I came to realize that while it was a decent organizing tool it is financially ineffective. Any stock that is artificially undervalued due to divestment will be immediately snapped up in the global marketplace by those without moral restraint, thus instantly negating any supposed gains. It's not possible to organize around the tactic without misleading folks as to its real world effect. Stock prices and investor profits just aren't going to change as a result. This is even more true for fossil fuel companies than it was for the relatively limited number of corporations that were very active in South Africa. Enough of the entire world divesting from fossil fuel stocks to make the bosses sweat? C'mon. At my school we created an uproar, did not achieve divestment, and had exactly the same PR effect on South Africa and its corporate benefactors as those schools that did divest. I eventually wished that we'd pushed the school for shareholder resolutions, product and intellectual boycotts, and other corporate campaign strategies - things we likely would have won and that would have had a more direct impact on the corporations and South Africa. My two cents worth.