Nationwide Presses for Distance from ALEC, although its Lobbyist Won Big ALEC Award when its Old Top Lobbyist Led ALEC in 2008 | PR Watch

Nationwide Presses for Distance from ALEC, although its Lobbyist Won Big ALEC Award when its Old Top Lobbyist Led ALEC in 2008 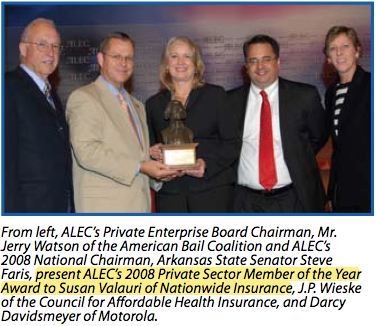 Nationwide Mutual Insurance Company, a "mutual" insurance and financial services company, published a press release last week distancing itself from the controversial American Legislative Exchange Council (ALEC). In the release, the company said it had not funded ALEC for over a decade.

However, a review of ALEC materials by the "2old2care" blog, verified by the Center for Media and Democracy (CMD), revealed that a Nationwide employee received an ALEC award for corporate lobbyists and special interest group representatives four years ago.

Ms. Valauri received the award from ALEC, when it was led by Alan Bronson Smith. He was Nationwide's head of government relations from 1978 to 2002. Smith not only represented Nationwide on ALEC's corporate "Private Enterprise" board a decade ago, but also a few years after leaving Nationwide he became the Executive Director of ALEC from 2008 to 2009.

Nationwide's current Director of Public Relations, Dace de la Foret, told CMD: "I spoke to Susan Valauri, and she confirmed that based on Nationwide's decision not to continue its affiliation with ALEC she resigned from her position as Private Sector Chair at ALEC prior to 2002. The 2008 award was for past service, and at the time she was not a member nor did she have any affiliation with ALEC." The date of her award overlaps with the period that her former colleague, Smith, was managing ALEC's day-to-day affairs.

After leaving ALEC, which is now led by former Verizon lobbyist Ronald Scheberle, Smith took a post with ALEC's long-time partner, the controversial Heartland Institute. Heartland gained notoriety with its billboard campaign comparing Americans who believe the climate is changing to the Unabomber, Ted Kaczynski. Like ALEC, Heartland has lost corporate donors due to its controversial positions.

In his role at Heartland, Smith advanced corporate agenda items such as changes to the rules for using car parts after a car crashes, a long-standing item on the ALEC wishlist. Nationwide has backed similar legislation, among other items on its legislative agenda. Smith was part of Heartland's "CFIRE" project, which stands for "Center on Finance, Insurance and Real Estate." 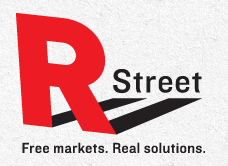 Last year, Smith opened Heartland's "operational hub" in Ohio to push its agenda to change the laws in the Buckeye state. But CFIRE, which was led by long-time ALEC "Advisor," Eli Lehrer, was recently spun off from Heartland. Now Lehrer leads a new group pushing a similar agenda in DC, called the "R Street Institute." Nationwide's former lead lobbyist, Smith, is described as a co-founder of R Street and is listed as its "Midwest Director."

R Street's agenda echoes ALEC's with the familiar claim: "Free markets. Real solutions." And R Street appears to be pushing the agenda of some of ALEC's big benefactors, such as Big Tobacco with its interest in changing laws to advance the claim that the consumption of tobacco can "cure" smoking, which is also on ALEC's agenda.

While Nationwide's former chief lobbyist works to promote items that echo the ALEC agenda, Nationwide's current leaders are sticking to their statement distancing the company from ALEC and standing by their decision not to fund ALEC's activities. Meanwhile, State Farm Insurance, another mutual company, continues to stand by ALEC, although calls for it to cut ties with ALEC continue.

“Americans chooses between a Democracy or a Socialist Government this year”. If you are going to vote Democratic in this years election you are supporting freeloading, illegal immigration, the government controlling all aspects of our lives, the “New America” a Bankrupted Socialist Country teetering on becoming a Communist State! If this is the direction you want our country to go, vote Obama. If you are voting Republican this year’s election you want to keep the USA as a Democracy, follow our US Constitution, reduce taxes, fix our deficit, get rid of the government controlled health care system, stop the government in its discrimination practices in its enforcement of the immigration law on racial lines, Vote Romney If you are voting for someone other then the above you are wasting your vote and you will be giving Obama a voting edge.
Reply to Anonymous who posted 10/14/12 at 908P Interesting how you throw out terms, but it seems you either don't know the meaning of those terms, or you're intentionally stirring the pot in error. In any case, Obama is NOT a socialist. He has defined himself as a "New Democrat". Look that up at wikipedia. Rmoney twists and turns so much on most issues, he's making himself into a pretzel. It's hard to know from day to day where he stands. But if you want to pay more for privatized Medicare and get less in Social Security, by all means, vote for Rmoney.
I suggest the initial poster looks at politicalcompass.org then looks at the definition of Socialism and see that the Democrats are nowhere near being Socialist. Republicans on the other hand are much closer to National Socialists.