State legislators attending this week's American Legislative Exchange Council (ALEC) meeting in Salt Lake City will be told they can advance ALEC's mission of "limited government and free enterprise" by letting "the free market reduce smoking-related diseases," according to an agenda obtained by the Center for Media and Democracy.

"Can Tobacco Cure Smoking?" is the title of a workshop this morning led by the tobacco industry-backed Dr. Brad Rodu, who is trained as a dentist but has the title "Chair of Tobacco Harm Reduction Research" at the University of Louisville, a program primarily funded by U.S. Smokeless Tobacco Co., an ALEC member and manufacturer of smokeless tobacco brands like Copenhagen and Skoal. He is also a Senior Fellow at the Heartland Institute, the Illinois-based think tank that attracted attention earlier this year for making billboards that likened those who believe in man-made climate change to mass murderers and terrorists. 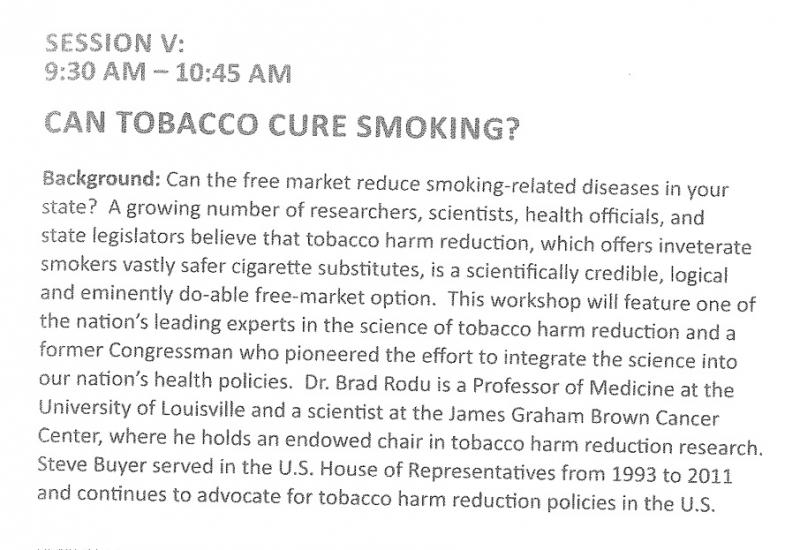 Rodu's research supports the idea that smokers should replace cigarettes with smokeless chewing tobacco or "snus" moist tobacco packets -- a "free market" solution to reducing smoking that would allow tobacco companies to continue profiting off of addiction.

The Food & Drug Administration and health advocates have strongly opposed substituting cigarettes for smokeless tobacco because "chew" and "snus" still cause cancer and other serious diseases, and suggesting that smokeless tobacco is a safe alternative would likely lead to a rise in overall tobacco use. The risk is even more significant because tobacco companies market the product to young people with "winter chill" flavors and bright candy-colored packaging. Additionally, because of the low salt content, snus users don't need to spit, making it nearly impossible to tell if a high schooler is chewing snus or Bazooka Joe bubble gum.

As CMD has reported, in May of 2011 Wisconsin Sen. Alberta Darling quietly inserted an amendment into the state budget that was virtually identical to the tobacco industry-supported ALEC model bill "Resolution on the Enhancement of Economic Neutrality, Commercial Efficiency, and Fairness in the Taxation of Moist Smokeless Tobacco (MST) Products." The provision would change the way tobacco is taxed from a per-unit basis or a percentage of cost to a weight-based tax, which would effectively lower the price of snus and smokeless tobacco products manufactured by the big tobacco companies. The provision successfully passed after ALEC sent a letter to Wisconsin legislators supporting the amendment, but Governor Scott Walker vetoed it.

Though ALEC has been shedding corporate members in recent months as the organization has come under increasing public scrutiny (at least 28 members have dropped so far this year), the tobacco industry has remained faithful. Reynolds American is a "President" level sponsor of ALEC's 2012 conference (which in 2010 cost $100,000) and Altria/Philip Morris is a "Chairman" level sponsor (which in 2010 cost $50,000). Additionally, former tobacco industry lobbyist W. Preston Baldwin III is the Chairman of ALEC's governing Private Enterprise Board, Reynolds America lobbyist David Powers is the Board's treasurer, and Altria lobbyist Daniel Smith is part of the Board's Executive Committee. Additionally, Philip Morris lobbyist Brandie Davis, the Private Sector Co-Chair of the ALEC International Relations Task Force, has been named a "Private Sector Member of the Year" for 2012. 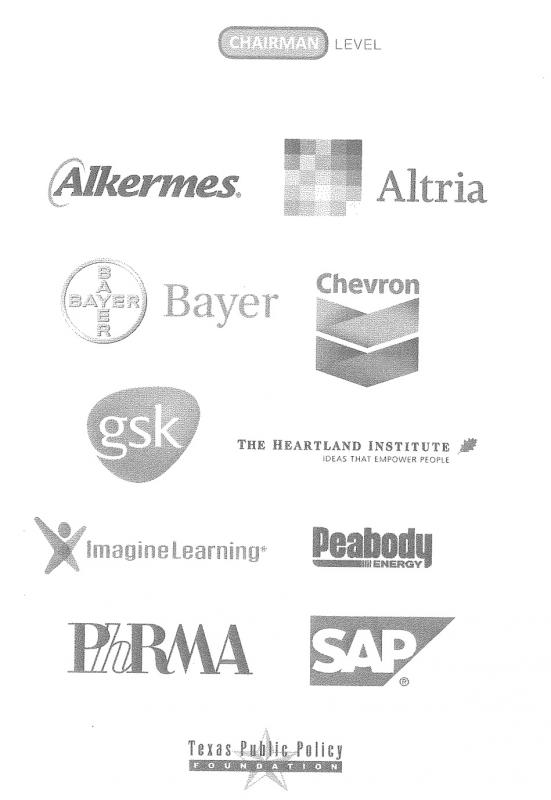 Also paying hundreds of thousands of dollars to sponsor the ALEC meeting -- including the "Can Tobacco Make You Healthier?" panel -- are companies that claim to be in business to make sick people well, such as pharmaceutical companies Bayer, GlaxoSmithKline and Alkermes, and pharmaceutical trade group PhRMA, each of which are "Chairman" level sponsors of this year's meeting. The "Chairman" level cost $50,000 in 2010, meaning these companies may have spent $200,000 or more cumulatively to sponsor the meeting. Bayer and GlaxoSmithKline also have representatives on the ALEC Private Enterprise Board, where they sit alongside representatives from the tobacco industry. Other health-related companies sponsoring this year's meeting are insurance company State Farm at the $25,000 "Vice-Chairman" level, and at the $10,000 "Director" level, pharmaceutical company Boehringer Ingelheim and hospital operator Intermountain Healthcare. Despite public pressure, these groups have stood by ALEC and the tobacco industry.

The "Can Tobacco Cure Smoking?" workshop is one of around a dozen that state legislators can attend at ALEC's 39th Annual Meeting, which runs July 25th through 28th at Salt Lake's swank Grand America Hotel, the only AAA Five Diamond hotel in the city. Other workshops include "Municipal Pension Reform" and "Using Non-Addictive Medication in Alternatives to Incarceration," and one titled "Regulation Without Representation" warning of how the Environmental Protection Agency (EPA) "has taken on an ardent regulatory agenda that threatens the representative nature of our government."

Legislators will also sit alongside corporate lobbyists on ALEC's task forces to amend and vote on "model" legislation. The Commerce, Insurance, and Economic Development Task Force, for example, will discuss topics like "the resurgence of 'right to work,'" getting rid of licensing restrictions for certain professions, and eliminating federal restrictions on states charging toll fees on roads. The Communications and Information Technology Task Force will discuss "the high cost to taxpayers from municipal broadband" and the Energy, Environment, and Agriculture Task Force "will cover the EPA's regulation of carbon dioxide" as well as consider model bills like the Animal Property Protection Act and the Intrastate Coal and Use Act.

As CMD has reported, legislators will also attend corporate-sponsored parties and receptions, including an "invitation only" cigar reception, from 9 p.m. to midnight, hosted by one of ALEC's major tobacco firms.

It is not yet known if "snus" will be on the menu.