This week politicians and corporate lobbyists will descend on Salt Lake City for the 39th annual conference of the American Legislative Exchange Council (ALEC). While there, ALEC politicians will be schooled on ALEC's portfolio of "model" legislation, which they will be asked to bring home to their state for introduction -- sans ALEC letterhead.

In previous years, ALEC lobbyists and politicians were able to hobnob at ALEC meetings under a shroud of secrecy, but because of growing criticism of the organization, protestors are planning to 'welcome' ALEC to town. Exposure of the group and its agenda has led to 28 corporations and over 50 legislators cutting ties with the organization -- meaning there will be a few empty seats at this year's meeting.

ALEC is an organization that brings together corporations and politicians to have an equal voice and vote on "model" bills on a wide range of issues such as education, healthcare, environment and immigration. Even after the Center for Media and Democracy (CMD) made available more than 800 of these pieces of legislation, ALEC has doubled down on the secrecy front. It has not released the detailed agenda or bills for discussion in Utah and has made it even more difficult for members to access their model bills.

On the first day of the Utah conference, ALEC will be welcomed to the state at a luncheon with a speech by Utah's Governor Gary Herbert. Beyond that, few details of the conference have been made public. An open records request initiated by Progress Virginia made available the itinerary of one of the eight task forces -- the International Relations Task Force Meeting and Federal Relations (Federalism) Working Group. Some of the items on the agenda include a "Draft Resolution to Commend and Strengthen the US-Israel Economic and Strategic Partnership," "Draft Resolution Providing Recommendations on UN Internet Oversight" and "Draft Resolution for a Public-Private Partnership Initiative for US Aid to Africa." This task force will also be launching its new "Intellectual Property Subcommittee" at the conference.

"All work and no play" is not the ALEC style. The conference will be held at Salt Lake City's Grand America Hotel, the only AAA Five Diamond hotel in Salt Lake City. Legislators will be able to indulge in the seven massage rooms, full salon services, French patisserie, outdoor dining area where they can be serenaded by a harp, or one of the "Mediterranean-inspired" pools offered by the hotel. Legislators will also gain free-access to a host of corporate-sponsored events held throughout the week, including a cigar receptions on Thursday hosted by one of ALEC's major tobacco companies and a trap shoot event hosted by the National Rifle Association, with complimentary guns and ammo, as well as drinks and a barbecue. 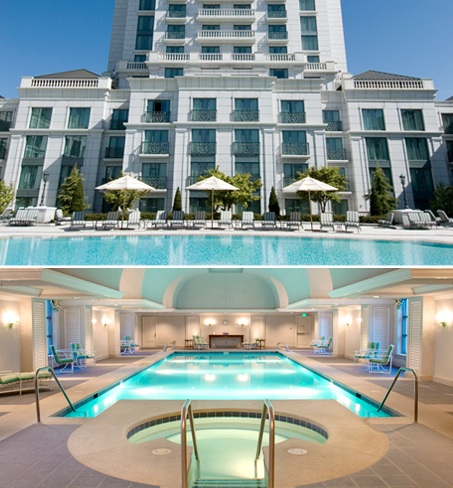 Many of the legislators are able to attend these conferences through the ALEC "scholarship" fund.

In March, CMD filed a complaint with the Wisconsin Government Accountability Board alleging the scholarship scheme violates the state's ethics and lobbying laws. This month, the former chief of the IRS' nonprofit division, Marcus Owens, filed a complaint with the IRS on behalf of Clergy VOICE, a group of Christian ministers in Ohio, alleging that ALEC is violating the terms of its charitable status and intentionally misleading the IRS, in part because of the scholarship scheme.

'To Protest a Group like ALEC, You are Protesting Corporatocracy'

A coalition of local and national groups will be hosting an alternative "ALEC Exposed" conference to educate the public about some of the more extreme aspects of the ALEC agenda. Supporting groups include CMD, Common Cause, People for the American Way, Progress Now, AFL-CIO, Southern Utah Wilderness Alliance, The Voters Legislative Transparency Project (VLTP) the Utah League of Women Voters and the Alliance for a Better Utah and others. Another coalition of groups will be hosting an ALEC "Welcoming" Committee. These groups include Occupy Salt Lake City, Peaceful Uprising, Move to Amend Salt Lake, the Local International Workers of the World (IWW), Revolutionary Students Union and the Salt Lake Dream Team, and others.

In June, the Alliance for a Better Utah launched a campaign where it put up billboards across the state which read "ALEC is Coming..." and directed viewers to their website for more information. The group estimated that more than 2 million will have seen the billboard before this week's conference.

One of the organizers, Jesse Fruhwirth, told CMD that ALEC's influence over our democracy is comparable to a slow-moving, piecemeal coup d'etat.

"To protest a group like ALEC, you are protesting corporatocracy. ALEC is one of the root causes behind efforts to persecute organized workers, destroy the environment and incarcerate massive amounts of people," he said. "We can no longer allow money to buy political influence." 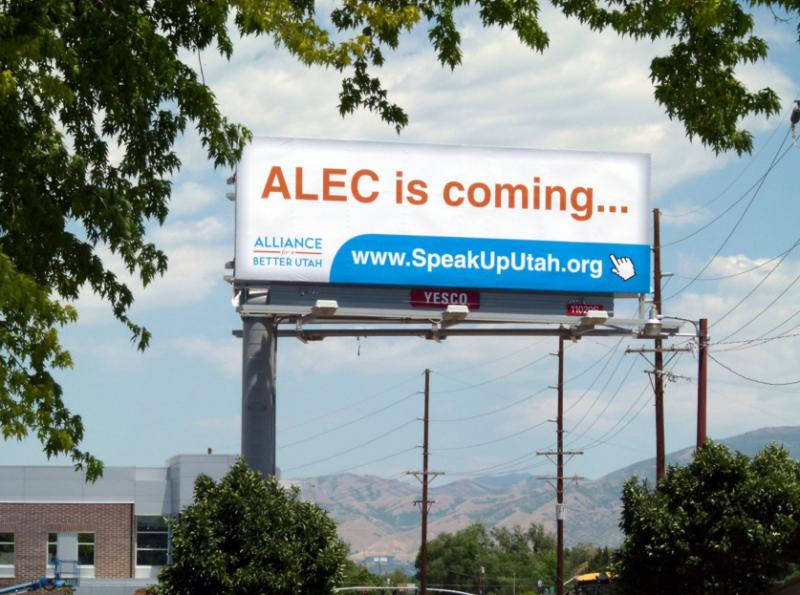 Today at 5:30 p.m. Move to Amend will be hosting a performance by the "Bread and Circus Democracy Bandwagon Theater" with the message that "Corporations and not people and money is not speech." This event will be at the Washington Square Lawn SW corner. At 6-8 p.m. there will be an ALEC Exposed teach-in featuring speakers from national and local organizations including CMD's Executive Director Lisa Graves. The teach-in will be held at 629 S. State St. The new short video "ALEC Rock" produced by Pulitzer-winning cartoonist Mark Fiore, in partnership with CMD and the Alliance for a Better Utah, will be premiered at the teach-in. On Thursday at 10 a.m. there will be a press conference by coalition groups also at 629 S. State St.

As CMD reported a week before the conference, EnergySolutions, a $1.8 billion Utah company, decided to cut ties with ALEC. In total, 28 companies have severed ties with ALEC after the organization came under the spotlight for pushing an extreme agenda. Other Utah corporations, such as ALEC state corporate co-chair, 1-800 Contacts, Inc., which sells contact lenses, are still standing with ALEC.

ALEC is not without cheerleaders in the Utah legislature. ALEC has also been recently publicly touted by some of its over 30 Utah legislator members in a new PR video produced by the Sutherland Institute, a Utah "think tank" belonging to the State Policy Network, which is an ALEC member. In the video, ALEC members Utah Sen. Michael Waddoups, Sen. Wayne Niederhauser, Rep. Bradley Daw, Rep. Gage Froerer, Sen. Curt Bramble praise the organization and even provide examples of when they've used ALEC model legislation in the state.

"I've worked on several pieces of legislation that I've had some support from ALEC. I've been actively involved in property tax legislation for the past several years and I've taken models -- model legislation from ALEC," Froerer said.

CMD called these ALEC boosters in an effort to get a hold of the full ALEC agenda, but only one legislator was able to forward the partial agenda of the ALEC Health and Human Services Committee. Stay tuned to PRwatch.org for further reporting on this conference.

For more resources on ALEC please visit ALECexposed.org or these links:

How about photograhing and publishing the legislators who attend this "convention?"
Kudos to Mark Fiore. Excellent portrayal of ALEC and it's control of crooked politicians. This cartoon should be required viewing on all PBS kids programs.
Salt Lake City. Mormon Republican Presidential Candidate. Coincidence?