A communications director for Mitt Romney's campaign, Ciara Matthews, has been demoted after prohibiting reporters from asking the GOP presidential candidate questions about Todd Akin or abortion. Matthews was recently communications director for Wisconsin Governor Scott Walker's recall campaign and has long been an anti-abortion advocate -- and even wrote last year that Republicans should be speaking more about abortion. 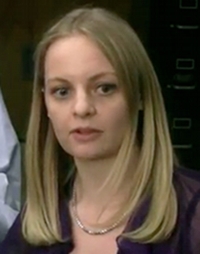 Last week, at the height of controversy over Missouri GOP U.S. Senate candidate Todd Akin's comments about "legitimate rape" and abortion, Matthews instructed a Denver TV reporter that she could only interview Romney if there were no questions about the issue. The journalist was reportedly told, "Well he's said all he's going to say about it. He doesn't have anything more to say, you won't be getting any new information so we don't want to talk about that." On Friday, the Romney campaign announced Matthews would be demoted and no longer be allowed to speak with the media.

This was not the first time Matthews had taken an aggressive stance in her relationship with press.

In 2010, when Matthews was deputy communications director for Tea Party favorite Sharron Angle's campaign for Nevada's U.S. Senate seat, she played a role in banning two news agencies from the candidate's election night party as "punishment" for asking questions without permission. Throughout her campaign Angle had developed a reputation for avoiding and even fleeing the news media, and in the final weeks of the campaign, Angle refused to answer questions from Nevada's CBS and NBC affiliates about national security policy and only said, "I'll answer those questions when I'm the senator." After the local reporters' tough questioning, Angle's then-campaign-spokesperson Matthews informed the CBS and NBC affiliates that they were uninvited from Angle's election party, telling the NBC affiliate's news director that his staff asking tough questions was tantamount to treating the candidate like Paris Hilton.

Matthews was also a volatile campaign spokesperson for Walker, getting into battles on Twitter with Democratic leadership and recall supporters, and quickly adopting an aggressive tone in campaign press releases.

Matthews Has Called for More Discussion of Abortion in Politics

Though strong-arming reporters is a familiar tactic for Matthews, her stonewall on the issue of abortion is a change of tune.

Last August, when Matthews was communications director for the anti-abortion Susan B. Anthony List (SBA List), she wrote that, "As a party, Republicans should be proud that their field of candidates consists of those who have affirmed the importance of standing up for and protecting life."

The LifeNews.com posting, which was originally titled "Republican Debate Should Have Emphasized Pro-Life Issues More," referenced SBA List's call for candidates to sign a pro-life pledge committing them to positions like defunding Planned Parenthood. Romney went on to release his own pledge agreeing with most of its tenets, earning a solid endorsement from SBA List president Marjorie Dannenfelser, particularly because Romney said he would advocate for a "Pain-Capable Unborn Children Protection Act" -- which would ban abortion after 20 weeks of pregnancy in any circumstances, even in cases of rape, which is in line with Akin's views on abortion and the GOP party platform.

In July, House Republicans tried to impose a nearly identical requirement on abortions in DC, which according to Politico, "would criminalize abortions after 20 weeks even in cases of rape, incest and fetal abnormalities. Doctors would face up to two years of jail time and fines for not complying with the law."

Though the bill did not pass, Romney's Vice Presidential pick Paul Ryan voted for it, as he did with a variety of other anti-abortion bills, including several co-sponsored with Akin.

Little Daylight Between Romney/Ryan and Akin?

Both Romney and Ryan have sought to distance themselves from Akin and his incendiary remarks, despite significant evidence suggesting there is little difference between Akin's position on abortion and the positions held by the presidential and vice-presidential candidates (at least with respect to Romney's statements since leaving the governorship of Massachusetts). Many have inferred that the campaign's quick denunciation of Akin has more to do with optics than outrage -- an effort to avoid talking about how the GOP ticket would approach abortion issues if elected, for fear of alienating the vast majority of Americans who favor abortion access (particularly in cases of rape) and whose support Romney needs to win in November.

But what is particularly telling is that even the campaign's most zealously anti-abortion staffers have adopted similar tactics. For Matthews, despite having long advocated for more discussion of abortion by GOP political candidates, she has apparently realized that the best way to get an anti-abortion agenda in the White House is to make sure the candidate does not talk about abortion.

Ciara has the bedside manners of an alligator and is a detriment to any campaign or staff on which she works. She was NOT Sharron Angle's communications director. She was a deputy CD. However, in the few months she worked for the Angle Campaign, she managed to generally annoy every Republican County Chair in the Silver State plus all of Angle's Nevada campaign team. She was regarded as a pawn of the NRSC by the Nevada Angle team and universally disliked. Nice to see nothing has changed!
Todd f#$k-a-duck Akin unfortunately represents the views of Romney-Ryan on women. Their voting records on women's issues can't be erased. Too late to disown it. They are deeply mysogynistic. The term "legitimate rape" is not only anoxymoron, it is just plain dumba$$ stupidity. Let some of these right-wingers talk to victims of rape in the military, let alone women who have no defense training. In fact, I think Republicans ought to be required to do community service by talking to dozens of women who have been sexually assaulted until they can grasp some idea of what it really feels like. They totally lack empathy, and are beyond "vignorant." Let those who would force raped women to have children, and who defend the rights of the foetus stop murdering their fellow human beings like Dr. Tiller, and scores of others. What woman would vote for asshats like these? Todd Akin - You can't fix stupid, and this guy is living proof of it.