ALEC Goes After the Center for Media and Democracy | PR Watch

ALEC Goes After the Center for Media and Democracy

The error-filled missive, which was intended to buck up the ALEC faithful as more and more corporations flee the organization, has us here at CMD pondering the old adage, "First they ignore you. Then they ridicule you. And then they want to attack you and then you win."

ALEC's August 13 message claimed that CMD "continue[s] to spread half-truths and lies" about ALEC in order to "weaken [ALEC's] resolve" and "create the false impression that companies are departing from ALEC."

We reported on six new departures, including Sprint and GE, just days ago. In every instance, CMD relied on a formal communication from the firm, a statement, letter, email, or conversation with staff.

Yet ALEC is attempting to make hay over whether some of the corporations that have said they are no longer funding ALEC are funders through paying membership dues and pay-to-play fees or whether they were funders of ALEC through sponsoring its meetings. Such distinctions among funders that have stopped funding ALEC are, to quote Shakespeare, "much ado about nothing."

Amgen: ALEC claims in its note to legislators that "Amgen is not severing ties with ALEC .... Amgen has informed us that it is letting its membership with us expire after this year." CMD reported on August 8th that Amgen had "dropped" is membership with ALEC. CMD's article attached the letter Amgen's assistant secretary and associate general counsel, Andrea A. Robinson, sent to Timothy Smith of Walden Asset Management which said, "After careful consideration, we have determined not to renew our membership in ALEC when our current membership expires this year." So Amgen is on the record dropping its membership after sustained pressure by community groups and shareholders.

As for ALEC's attempt to spin Amgen's public statement in August, the company's letter of departure speaks for itself.

And, despite ALEC's spin, neither Amgen nor Louis Dreyfus ever contacted CMD to request a correction about their decisions not to fund ALEC. However, some corporations have contacted CMD: firms anxious to distance themselves from ALEC and asking CMD to remove documented references to their past funding of ALEC, requests which were declined. 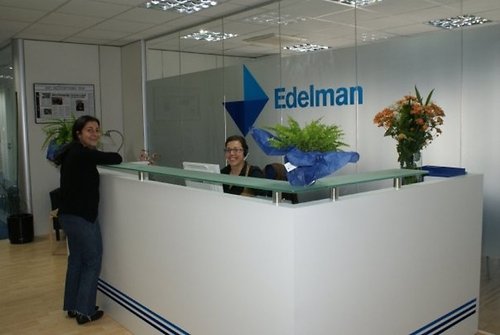 In May 2012, PRWeek reported that ALEC had hired the notorious global PR firm Edelman. Edelman is the firm of choice for big tobacco, big oil, and big pharma, all key sponsors of ALEC. ALEC also held a special meeting asking right-wing bloggers, such as the Breitbart operation, for help in "a very aggressive campaign to really spread the word about what we actually do," as CMD has reported.

An "aggressive campaign" is clearly underway.

ALEC's recent note claims that CMD's "top investigative reporter" has a "lengthy criminal background." It links to a attack-piece published by a newly created entity called The Washington Free Beacon (WFB), the online publication of the self-proclaimed "conservative advocacy group" the Center for American Freedom.

In that piece, recent college grad CJ Ciaramella focuses on Beau Hodai, a freelance reporter who has written for the Center for Media and Democracy, In These Times, Prison Legal News, Extra! (a publication of Fairness and Accuracy in Reporting), and the investigative news publication he founded, DBA Press.

Beau has been researching and reporting on ALEC since late 2009. His reporting has detailed the relationship between ALEC and private prison contractors in the dissemination of bills based on Arizona's SB 1070. And he has identified ALEC as one of the key forces behind attempts to destroy public employee unions and privatize public services.

Notably, the WFB attack job does not find any material errors in any of Beau's extensively documented reports on ALEC, but focuses on misdemeanor court records. It dwells on the fact that his legal first name is Mohamad. Beau has been nicknamed "Beau" since birth. (It is worth noting that "CJ" is not Ciaramella's legal first name but the nickname he uses instead of "Carl.")

Beau recently stirred the pot with a special report detailing corruption in the Ohio General Assembly based on public records that raise questions as to whether the state's elected officials in ALEC are complying with Ohio's ethics laws regarding gifts.

Interestingly enough, Beau learned that exactly one week following the publication of the Ohio ALEC corruption story, a private investigation firm requested court records concerning a past arrest. Allegations from those same court records emerged as the centerpiece of the WFB attack article.

WFB's Matthew Continetti (who previously was an opinion editor at the right-wing Weekly Standard, where he remains a contributing editor) outlined the WFB's strategy as part of its recent launch:

"What would happen if the media wolf pack suddenly had to worry about an aerial hunting operation? You are about to find out. The Washington Free Beacon is here to enter the arena of combat journalism. [...] At the Beacon, we follow only one commandment: Do unto them."

And this is the team ALEC is using to attempt to discredit CMD as an "attack-dog"?

This is not the first such piece to come out of WFB. In the past few months, Ciaramella has written three pieces personally attacking reporters and activists working to expose ALEC. In addition to the piece on Beau, he published a similar attack on Color of Change staffer Gabriel Rey-Goodlatte, as well as The Nation reporter Lee Fang. Fang has also written for Think Progress (the blog of the Center for American Progress) and Republic Report, and he has reported critically on ALEC over the past year. Color of Change has been instrumental in the call for ALEC corporate members to sever ties with the organization.

The latest piece also takes a shot at George Soros by attempting to link Beau to the philanthropist through PRWatch. But CMD openly discloses on its website that the past grant it received from the Open Society Institute was focused on homeland security, not ALEC. Notably, neither the WFB nor CAF disclose to the public which corporations, organizations, or individuals bankroll their operations or smear campaigns.

The People Behind the "Center for American Freedom"

WFB is a creature of the Center for American Freedom (CAF), which was incorporated in Washington, D.C., on August 18, 2011, as a not-for-profit corporation. According to District of Columbia Department of Consumer and Regulatory Affairs (DCRA) records, CAF has two active trade names: "Free Bacon" [sic] and "Washington Free Beacon," both of which were formally effected in March 2012.

Harison is also the former executive director of Keep America Safe, an operation co-founded in 2009 by Dick Cheney's daughter, Liz Cheney. William Kristol, the founder and editor of the neoconservative Weekly Standard, is a founding board member of Keep America Safe. Kristol is currently listed as a board member of CAF, and is the former executive director of the Project for the New American Century (PNAC), a neocon "think tank" that had strong ties to the American Enterprise Institute.

In addition, Goldfarb is a partner in the lobby/PR firm, Orion Strategies LLC. Not surprisingly, given Goldfarb and Kristol's warmongering predilections, Orion has lobbied on issues of arms sales and foreign relations for very special interests like defense contractors and foreign governments.

While these ties may explain some of the content on the WFB, what does any of this have to do with its efforts to defend ALEC by attacking the corporate bill mill's critics?

According to Politico, right-wing financiers Charles and David Koch also employ the services of Orion Strategies and, as CMD has documented, Koch Industries and/or the Koch family fortune have helped fund ALEC and numerous ALEC private sector members that help operationalize the brothers' ideological and financial agenda. There is no indication that the Kochs asked WFB to jump to the defense of ALEC. However, the right wing has been howling that the press and progressive groups have been too persuasive in exposing ALEC and in making the case about how ALEC helps make the corporate wish list into law through its members and operations.

In the letter to its members, ALEC also attempted to impugn CMD as a "highly partisan, fringe organization." The charge brings to mind pots and kettles. When CMD surveyed ALEC's political leadership in July 2011, it documented that 103 of the 104 legislators serving on ALEC's Board of Directors or holding the post of co-chair on its task forces or of a state were Republicans. It's difficult to imagine a more lopsided partisan make-up of a body of elected officials than that, other than in groups that are expressly described by their party label, such as the Republican Governors Association.

CMD is a non-partisan watchdog group that has taken heat for being highly critical of President Obama's financial policies and the Democrats' campaign financing practices. We have filed briefs challenging the Obama administration, including its detention powers under the recent National Defense Authorization Act, and have been critical of Democrats and Republicans who push the agenda of their corporate benefactors in dozens of areas.

CMD has been honored to receive several journalism awards for its work to expose ALEC: the "Sidney Award" for Investigative Journalism, along with The Nation magazine, in September 2011; the "Izzy Award" for outstanding achievement in independent media, along with Democracy Now! correspondent Sharif Abdel Kouddous, who covered the uprising in Egypt from the ground; and most recently, the "Professional Freedom and Responsibility award" from the Cultural and Critical Studies Division of the Association for Education in Journalism and Mass Communication -- an honor that has previously been awarded to Bill Moyers, Molly Ivins, I.F. "Izzy" Stone, Noam Chomsky, Studs Terkel, and Bob McChesney. Earlier this year, CMD also recieved one of the Milwaukee Press Club's 2011 "Excellence in Journalism" awards for its investigative work.

While ALEC is fighting CMD with misleading missives to its members and media smears, it is still shedding corporate board members, funders, and sponsors. And it is still getting hammered in the press for its extreme agenda and its corrupting influence, for the fact that corporate lobbyists vote as equals with elected officials on templates to change the law, and its repeated claims it does not lobby despite proof to the contrary. ALEC has also received continued scrutiny for its corporate-funded scholarships. CMD has learned at least one state has had trouble maintaining corporate donors to cover the usual trips for legislators to attend ALEC events.

As calls for investigation of ALEC's lobbying activities and financing practices mount (with three complaints now filed before the IRS and other ethics investigations at the state level), it will take more than Edelman PR and "combat journalism" to rescue ALEC from the trouble it is in.