The Center analyzed over 800 bills voted on by ALEC corporations and politicians behind closed doors after a whistleblower shared the documents.  The bills, which reach into almost every area of American life and often directly benefit huge corporations, were made available along with the Center's analysis to other reporters, activists, and citizens at our newest website ALEC Exposed.  This resource was accompanied by hundreds of related articles we prepared on ALEC's agenda, corporations, legislators, and funding on the Center's other sites, PRWatch, our reporting site, and SourceWatch, our specialized online encyclopedia.  Simultaneously, The Nation devoted a special edition of its magazine to breaking the story on ALEC Exposed, featuring expert analysis by its Washington correspondent John Nichols along with Joel Rogers, Laura Dresser, Wendell Potter, Lisa Graves, Julie Underwood, Mike Elk, and Bob Sloan. The Nation's Associate Editor, Liliana Segura, edited this special publication of the magazine, which is led by editor and publisher Katrina vanden Heuvel. The Nation is America's oldest weekly magazine, and the country's most widely read journal of opinion. The Center's team on ALEC was led by executive director, Graves, and the director of the Center's Real Economy Project, Mary Bottari, and included Potter, the Center's Senior Fellow on Health, along with Brendan Fischer, Rebekah Wilce, Eric Carlson, Jennifer Page, Steve Horn, Sara Jerving, Pat Barden, Sari Williams, Nikolina Lazic, Page Metcalf, Anne Landman, Jill Richardson, and Jessica Opoien. 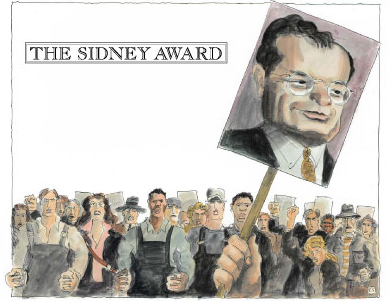 The Sidney is a monthly award by the Hillman Foundation for outstanding socially-conscious journalism that fosters social and economic justice. The Hillman Foundation was created to honor the vision of Sidney Hillman, President of the Amalgamated Clothing Workers of America (ACWA), who fought for a "better America" and a progressive industrial democracy until his sudden death in 1946. The generosity and devotion of the workers and leaders of the board of ACWA as well as the Textile Workers of America (the predecessor of Service Employees International Union) and others endowed the Foundation. It has worked for more than six decades to illuminate critical issues for working people in this country and seek equitable solutions to help the people of our nation.

Since 1950, the Hillman Foundation has been honoring journalists "who pursue investigative reporting and deep storytelling in the public interest."  Its annual Hillman Prize winners have included Jane Mayer for "The Dark Side," about Dick Cheney and the Bush Administration's violations of domestic and international law; Bill Moyers and Kathleen Hughes for his Journal's broadcast on "Buying the War;" and Spike Lee and Sam Pollard for "When the Levees Broke," among others. The Sidney Award is given monthly to honor investigative journalism, and recipients receive $500, a bottle of union-made wine, and a certificate designed by New Yorker cartoonist, Edward Sorel.  With this award, the Center for Media and Democracy joins a distinguished list of this year's monthly award recipients, including Tom Gogola for his piece in New York magazine on overfishing and Jose Antonio Vargas for his story in the New York Times on his life as an undocumented immigrant.

Bruce Raynor, the president emeritus of Workers United, is the president of the Hillman Foundation, which published an interview on ALECexposed with CMD's Graves and Bottari.  The interview also highlights other investigative pieces spawned by the joint effort of CMD and The Nation, including reports by Daily Kos bloggers, Keystone Progress, Truthout, Bloomberg, the Los Angeles Times, the Arizona Times, the Minnesota Independent, and scores of other media outlets over the past two months.  New reports on ALEC politicians, corporations, and legislation across the country are being issued weekly by CMD and other media, bloggers, and activists. Upon receiving the award, Graves and Bottari noted "This was truly a team effort and it was deeply rooted in Wisconsin, where we have seen numerous ALEC bills and aspects of the ALEC corporate agenda being rammed through the legislature by ALEC politicians. We were fortunate to be able to tap our Wisconsin experts to help analyze bills that harm working people in this state and across the nation. CMD wishes to extend its deepest appreciation to everyone who participated in this project and all who continue to work to help tell this story in every state in the union."