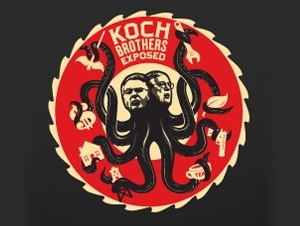 Hundreds of ALEC's model bills and resolutions bear traces of Koch DNA, raw ideas that were once at the fringes but that have been carved into "mainstream" policy through the wealth and will of Charles and David Koch. Of all the Kochs' investments in right-wing organizations, ALEC provides some of the best returns: it gives the Kochs a way to make their brand of free-market fundamentalism legally binding.

No one knows how much the Kochs have given ALEC in total, but the amount likely exceeds $1 million -- not including a half-million loaned to ALEC when the group was floundering. ALEC gave the Kochs its Adam Smith Free Enterprise Award, and Koch Industries has been one of the select members of ALEC's corporate board for almost twenty years. The company's top lobbyist was once ALEC's chairman. As a result, the Kochs have shaped legislation touching every state in the country. Like ideological venture capitalists, the Kochs have used ALEC as a way to invest in radical ideas and fertilize them with tons of cash.

The Kochs have a penchant for paying their way out of serious violations and coming out ahead. Helped by Koch Industries' lobbying efforts, one of the first measures George W. Bush signed into law as governor of Texas was an ALEC model bill giving corporations immunity from penalties if they tell regulators about their own violation of environmental rules. Dozens of other ALEC bills would limit environmental regulations or litigation in ways that would benefit Koch.

ALEC's model legislation reflects parts of the Kochs' agenda that have little to do with oil profits. Long before ALEC started pushing taxpayer-subsidized school vouchers, for example, the Koch fortune was already underwriting attacks on public education. David Koch helped inject the idea of privatizing public schools into the national debate as a candidate for vice president in 1980. A cornerstone of the Libertarian Party platform, which he bankrolled, was the call for "educational tax credits to encourage alternatives to public education," a plan to the right of Ronald Reagan. Several pieces of ALEC's model legislation echo this plan.

The Kochs' mistrust of public education can be traced to their father, Fred, who ranted and raved that the National Education Association was a communist group and public school books were filled with "communist propaganda," paranoia that extended to all unions, President Eisenhower and the "pro-communist" Supreme Court. Such redbaiting might be ancient history if fifty years later David was not calling President Obama a "hard-core socialist" who is "scary."

The Kochs have not just multiplied the wealth of their dad; they've repackaged and amplified his worldview. David's latest venture, Americans for Prosperity, subsidizes the Tea Party movement, which repeats this "socialist" smear. Charles is a member of the exclusive Mount Pelerin Society, inspired by Frederic von Hayek's antisocialist polemic, The Road to Serfdom. Through the Charles G. Koch Charitable Foundation, the Institute for Humane Studies administers the Hayek Fund for Scholars and sister programs to fund academics and staffers for like-minded groups across the country. "Charles G. Koch Fellows" and interns stock ALEC, and have gone on to direct ALEC task forces.

Another David Koch project, Citizens for a Sound Economy (CSE) -- which launched the effort to repeal Glass-Steagall protections keeping banks from gambling in securities -- helped fuel the fight for "free trade," an unpopular policy in the 1980s. The North American Free Trade Agreement passed with help from CSE and its corporate allies. ALEC resolutions for state legislators have long supported such trade agreements in the face of local concerns about job losses, and today the Kochs' free-market fantasy is reflected in ALEC's support for free trade pacts with Korea, Georgia, Colombia and other countries. On just about every issue taken on by Koch's CSE, ALEC has provided legislative tools to carry them through to state legislatures, from privatizing "federal and state services and assets," as CSE put it, to blocking common-sense caps on unlimited credit card interest rates.

The (Cheap) Price of Powerful Influence

ALEC and the Kochs often pursue parallel tracks. Just as ALEC "educates" legislators, Koch funding has helped "tutor" hundreds of judges with all-expenses-paid junkets at fancy resorts, where they learn about the "free market" impact of their rulings. But ALEC also operates like an arm of the Koch agenda, circulating bills that make their vision of the world concrete. For a mere $25,000 a year, Koch Industries sits as an "equal" board member with state legislators, influencing bills that serve as a wish list for its financial or ideological interests.

It's a pittance for the Kochs, but far out of the reach of working Americans. Ordinary citizens rely on our elected representatives' efforts to restore what's left of the American Dream. But through ALEC, billionaire industrialists are purchasing a version that seems like a real nightmare for most Americans.

Go to ALECexposed.org to learn more!

Well, any sane normal American understands that if a liberal or lib organization is accusing certain persons/parties of "influencing" the Right, well then we know the left is doing the same only 100 fold. I can give you my 4,000+ files and growing on Soros and all the left "influence" he whores out. Sincerely, Keith Greene
Soros does fund his ideology as do the Koch bros, Murdoch etc. The difference is that Soros is funding causes helping the working class while the Koch/Murdoch donators are fighting for the rights of giant corporations. Fox news will have. you voting against your own interest and feed you all the info you need to defend your position. Fox news sheeples need to turn off Fox and come into the light...