The Trap Shoot Must Go On: Guess Who'll Be Shootin' with ALEC Members in Salt Lake? (The NRA and a Machine Gun Corp) | PR Watch

The Trap Shoot Must Go On: Guess Who'll Be Shootin' with ALEC Members in Salt Lake? (The NRA and a Machine Gun Corp)

Madison, WI -- Three months after the American Legislative Exchange Council (ALEC) issued a PR statement that it was eliminating its Public Safety and Elections Task Force, which was previously led by the National Rifle Association (NRA), the NRA announced that it would still be hosting its regular annual shooting event at ALEC's summer convention, in Salt Lake City on July 28. For the past several years, on the Saturday of ALEC's annual meeting, the NRA has regularly hosted an outing for ALEC legislators and lobbyists to go shooting together -- with complimentary guns and ammo plus plenty of food and drink (this time it is a barbeque). 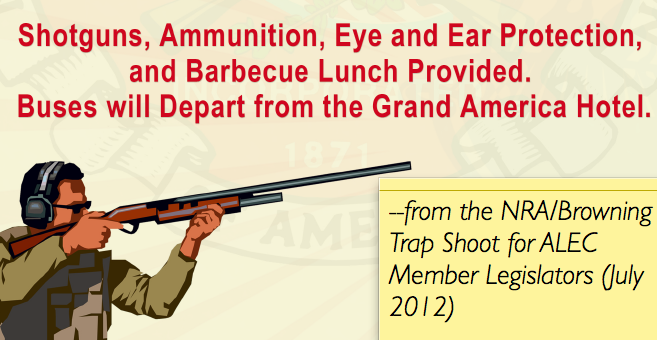 The continuation of this annual ALEC/NRA tradition comes just 100 days after ALEC urged the press to move on from it coverage of ALEC's role in proliferating the NRA's so-called "Stand Your Ground" (SYG) or "Castle Doctrine" law since it first passed in Florida in 2005. As the Center for Media and Democracy (CMD) documented, the NRA's lobbyist brought that bill to ALEC's annual meeting where ALEC's crime task force "unanimously" approved it as a national model, at a meeting co-chaired by Wal-Mart. ALEC's senior staffer on gun policy, Michael Hough, boasted on NRA radio that this legislation was "one of our model bills we have states introduce...."

Common Cause has filed a whistleblower complaint with the IRS based on ALEC's tax filings attesting that it does not lobby for bills to be introduced, despite such evidence to the contrary. And, a few weeks ago, Marcus Owens -- the former head of the IRS's nonprofit division -- filed a complaint with the IRS based in part of the research of CMD and DBA Press analyzing the role of corporations in ALEC and its lobbying operations and calling for civil and criminal penalties. Last weekend, the New York Times editorial board called ALEC a partisan lobby that masquerades as a charity. 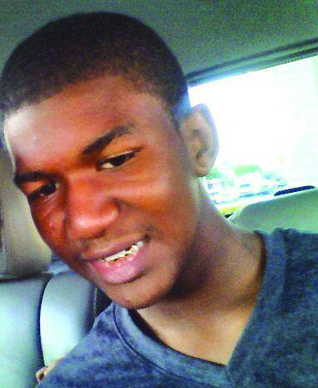 Key provisions of the Florida SYG bill are now law in 34 states. The Florida law was cited initially to prevent the arrest and prosecution of George Zimmerman who shot unarmed high school student Trayvon Martin to death in February, provoking a national outcry over these bills and other parts of the ALEC agenda such as laws to make it harder for Americans to vote. Since then, Zimmerman has been charged with second degree murder, Florida and other states are considering repealing or amending their SYG laws, and over two dozen corporations and 57 politicians have left ALEC, including Wal-Mart, the world's largest retail seller of ammunition and long guns.

ALEC's claims to reporters that it would be abandoning its involvement in what it called its "non-economic issues," as epitomized by the SYG law, and re-focusing on "free market" economic issues were met with skepticism by many observers. This skepticism was underscored when the civil rights group Color of Change discovered that the co-chair of the task force at issue, Rep. Jerry Madden (R-TX), told a religious magazine that many of the issues handled by the disbanded committee would continue as other parts of ALEC operations. And, although ALEC has claimed to some that the staff of that task force no longer works for ALEC, its long-time staffer, Michael Hough, continues to be listed as an ALEC "senior fellow."

The continuation of the NRA's annual shooting event in conjunction with ALEC's convention was not announced to the press in April when ALEC attempted to redirect attention away from its long ties with the gun industry's trade group.

The shooting event for ALEC members is co-sponsored by the Browning Arms Company, a Utah subsidiary of the global gun dealer Fabrique Nationale d'Herstal (FN Herstal), a Belgian firm. It, in turn, is held by the Belgain Herstal Group, which is a private company that does not disclose its revenue or executive compensation but which has been subject to labor strikes abroad over inadequate wages for its workers. This foreign corporation has some manufacturing and marketing operations in the southern United States and, in addition to Browning, also owns the Winchester firearms brand, both of which originated in America before being sold off to foreign corporations. 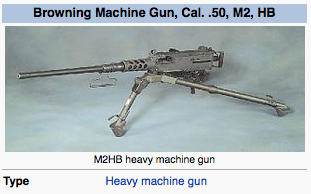 Browning sells semi-automatic firearms and sporting goods in the U.S. but it is perhaps most famous for its military machine guns, such as the original Browning Automatic Rifle (the "BAR"), which has been used in numerous wars. Herstal commands a substantial portion of the global market for machine guns and sells weapons that can fire hundreds of rounds in a minute to military or other buyers, such as the Browning M2HB, the Minimi M249, and the MAG.

The retail sale of machine guns has been barred by federal law since the gangster era, but at last December's ALEC "policy summit" in Scottsdale, the NRA successfully obtained the approval of the ALEC crime task force for a modified "model" bill that would ban cities from barring the sale of "machine guns," expressly. CMD documented this in its two-part special report on how the NRA's gun agenda has thrived while Koch Industries has helped lead ALEC through its seat on ALEC's corporate board and on its crime task force last year. (Koch continues to bankroll and back ALEC.)

ALEC also strongly opposed the 1994 "Assault Weapons Ban," which sought to prevent the U.S. sale of semi-automatic weapons, similar to the notorious AK-47 -- a rapid-fire style weapon that has been used in numerous mass murders in the U.S. That ban has since expired. ALEC also filed papers with the courts calling for city bans on guns to be struck down as unconstitutional. And, ALEC's move seven months ago to urge state legislators to prevent city officials from limiting access to machine guns comes in the wake of an earlier decision by new justices on the U.S. Supreme Court who struck down D.C.'s gun ban, in part at ALEC's request.

The NRA's gun agenda helps protect and expand the market for the firearms sold by the weapons companies that bankroll its multi-million dollar lobbying and influence operations. Although ALEC's crime task force no longer officially exists, ALEC is doing nothing to undo the damage done through its many years of advancing the wish list of the gun industry through laws like SYG, pushing for guns on college campuses, and even opposing codes of conduct for gun makers and sellers.

As Democracy Now! reported, at last week's meeting of the NAACP, its leader Ben Jealous rejected ALEC's efforts to avoid responsibility for its extreme gun policies saying, "the blood of every adult and child who is wrongfully killed because of these laws is on your hands."

And now the subsidiary of a major international weapons dealer -- which would benefit from the recent ALEC model bill changes protecting machine gun sales -- is co-sponsoring the NRA's annual shooting event for ALEC legislators coming to ALEC's summer shindig in Utah. When it comes to guns, ALEC's "economic" and "non-economic" agenda is indistinguishable.

Lisa Graves is Executive Director of the Center for Media and Democracy (PRWatch.org and ALECexposed.org). She formerly served as Deputy Assistant Attorney General in the Office of Legal Policy at the U.S. Department of Justice where she handled gun policy and was the Managing Editor of the National Integrated Firearms Violence Reduction Strategy. She also served as the Chief Counsel for Nominations for the U.S. Senate Judiciary Committee, as Deputy Chief of the Article III Judges Division of the U.S. Courts, and as an adjunct professor of law.