The corporate exodus from the American Legislative Exchange Council (ALEC) is testament to the power of citizen activism in preserving our democracy. Over the past few months, in response to public pressure, 20 corporations and more than 50 legislators have severed ties with the right-wing organization that brings together politicians and corporations to vote, behind closed doors, on controversial "model" bills that are then introduced in statehouses across the land. While a coalition of clean government organizations has been working to drag ALEC out of the shadows, citizens across the country have also been showing up at ALEC meetings with clever protest signs, uploading ALEC-related videos on YouTube and even organizing a national day of occupy protests to draw attention to ALEC's corporate agenda.

Recently, the Center for Media and Democracy (CMD) put out an ALEC Exposed call for photos, videos, and art illustrating some of the creative ways in which concerned citizens have worked to expose ALEC. Below are the CMD staff's picks. Winners have already received fashionable ALEC Exposed t-shirts in the mail.

In the spring of 2011, activists gathered at an ALEC conference in Cincinnati for the first public demonstration against ALEC. The protesters hosted street theatre, teach-ins, and marched around the hotel where the conference was being held, demanding greater transparency from the organization. A few weeks later a whistle blower came forward with over 800 "model" bills that were then posted at the Center for Media and Democracy's ALECexposed.org which has provided citizens with the resources to document ALEC's meddling in state laws.

The Cincinnati protest had been largely organized by students outraged by the attacks they were witnessing on unions in states like Wisconsin and Ohio. The organizers, who called their group "SeeYouInCincinnati," created this image during the planning stages to help visualize the role that ALEC plays as a conduit between corporations and legislators.

Mark Mendoza, one of the organizers, recalls the planning stages of the protest: "We were appalled that they chose Cincinnati as the location of their spring task force retreat and we weren't going to let them get away with another backroom meeting without being confronted. ... Millions of people [now] know about ALEC and [ALEC] no longer [has] any shadows to hide in."

Democracy is Not for Sale

Alli Hammond, who teaches writing at the University of Cincinnati, was one of the protestors that day. A few days earlier, she had helped out with a teach-in on ALEC, which had been spurred following a cautionary blog post on ALEC written by UW-Madison Professor William Cronon earlier in the month which generated millions of hits. Hammond took her kids Finn and Eden to the protest holding signs reading "Democracy is not for sale" and "Stop Corporations from Writing our Laws."

Hammond continues to protest ALEC because it "represent everything that's wrong with our political system: the moneyed interests calling the shots with impunity and the cynical and lazy legislator taking their marching orders from plutocrats instead of their constituents." 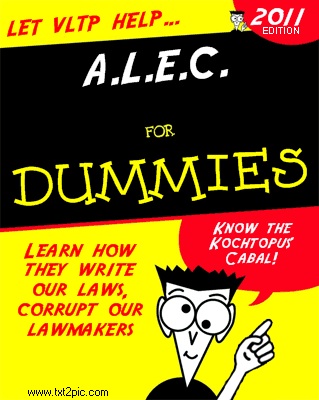 As the exposure of ALEC has grown over the past year, some of the individuals who had been pivotal in the early planning days of outing the organization formed the Voters Legislative Transparency Project (VLTP), which works to educate the public on ALEC through writing, teach-ins, and protests. While the group had crafted a logo for themselves, they wanted an additional way to creatively portray the core purpose of their organization -- education. The group decided to play off of the popular "For Dummies" books -- a series of reference publications with an easy to read, straightforward format. VLTP's mock "A.L.E.C. for Dummies" illustration proclaims the book teaches about "how they write our laws, corrupt our lawmakers" and promises the reader they will "know the Kochtopus cabal!" upon completion of the book. VLTP has pasted this image on the back of their organization's t-shirts and the group is printing more shirts for ALEC's upcoming meeting in Salt Lake City in July.

VLTP's Executive Director Bob Sloan says that exposing ALEC is crucial in discrediting an organization that is "neutering" our democracy.

"With each new article, blog post, exposé or state report published about ALEC, more people are discovering ALEC and how 'their' elected representatives are compromised and acting on behalf of corporations instead of their interests," Sloan said. "When we are successful at abolishing ALEC from our political landscape, [it will take another] generation of working to repeal, repair and reform our democracy -- so time is critical."