One Year Later: The First ALEC Protest in Cincinnati

With all the national media attention on the American Legislative Exchange Council (ALEC) over these past several weeks, few realize that a campaign to lift the veil on ALEC's operations and agenda began almost one year ago. This week marks the anniversary of the first public rallies in opposition to ALEC. This is the story of the power of ordinary extraordinary individuals to stand up, speak out and make an enormous difference in defense of democracy. 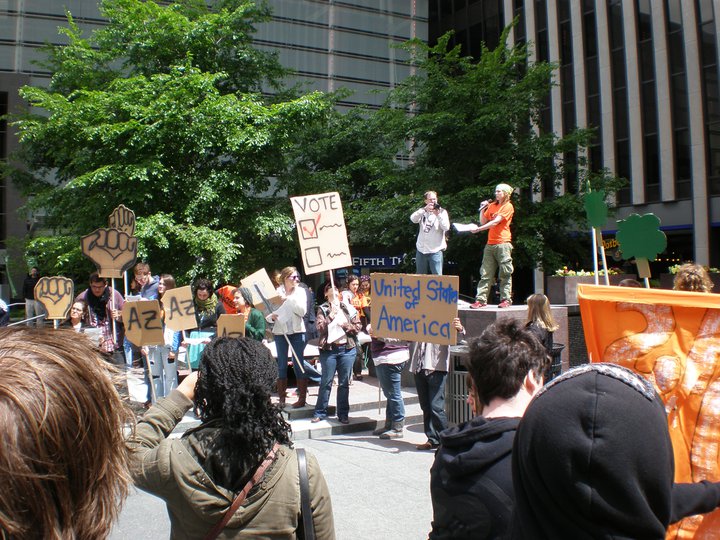 In early April 2011, a group of college students at Miami University in Ohio came across a blog post written by a University of Wisconsin-Madison professor on a little-known group that brings together legislators and corporations to vote on "model" legislation. Soon after they began mobilizing for the first national protest against this shadowy organization, ALEC, which was set to meet in Cincinnati at the end of the month. These early days of activism led to a snowball effect of exposure of ALEC resulting in a shift of the national dialogue on how laws in the United States are written and what forces are influencing their outcome.

Professor William Cronon, a professor of History, Geography and Environmental Studies in Madison, wrote the blog post which stirred public awareness of ALEC. He had written it during the unprecedented moment in Wisconsin when thousands occupied the Capitol building opposing the extreme legislative agenda of newly-elected Governor Scott Walker. Cronon's piece was a cautionary note on ALEC, suggesting that the crop of identical "un-democratic" legislation such as "voter ID" laws that make it more difficult for American citizens to vote and efforts to break apart public-sector unions sprouting across the country could be sourced back to ALEC.

The post on Cronon's personal website, as well as an op-ed he wrote in the New York Times that was critical of the new governor, so riled the Wisconsin GOP it filed an open records request to gain access to the professor's emails. This move sparked a national discussion about academic freedom and underscored concern that perhaps there was something to hide about ALEC. The organization had been the subject of a number of reports by public interest groups over the past decade but the press had paid little attention to concerns that had been raised. The Wisconsin battle and similar labor uprisings in other states, facing a wave of copycat legislation, helped ignite interest in the possible sources of this extreme agenda being rammed through in state after state. 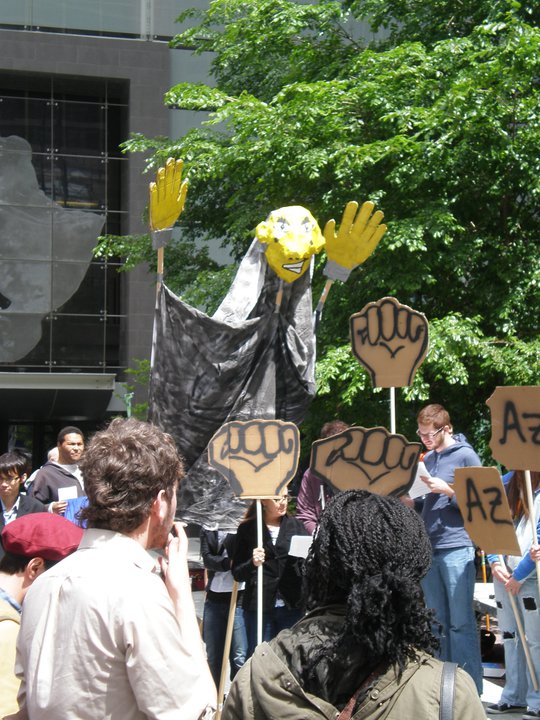 Simultaneously, a core group of Daily Kos bloggers, including some of these students, were piecing together what they could find about ALEC. It was an eclectic group, including a businessman, students, a minister, a former U.S. Department of Defense official, and a journalist, among others. They had examined ALEC "model" bills from 1995 to 2004 that were available on the website of the controversial Heartland Institute, which had worked closely with ALEC on numerous legislative initiatives. The bloggers worked to analyze ways in which ALEC's influence had grown over the years. One of the bloggers, Bob Sloan, had been researching ALEC's influence in the area of prison privatization. A former consultant to the prison industry, Sloan began focusing on ALEC's Prison Industries Act to a law that was enacted in Florida in 2000, based on what the Heartland Institute had touted.

These and other concerned Americans converged on April 29, 2011, when over one hundred people came to speak out against ALEC's Spring Task Force Summit in Cincinnati. The day started off with teach-ins in the morning and a rally at Fountain Square, a centralized meeting point in the city, in the afternoon.

Over one hundred people showed up for this landmark demonstration from across the country. The protest began with street theatre -- the protestors built a 15-foot tall puppet, which was intended to represent ALEC, and then several protestors played out a short reenactment of ALEC's influence over democracy since the 1970's, when the organization was founded by extremist Paul Weyrich.

The crowd marched around Cincinnati's historic Netherland Plaza hotel, part of the Hilton chain, where ALEC corporate and legislative members were meeting. Some of the demonstrators shouted demands for greater transparency, while banging improvised five-gallon bucket drums. The rally was followed by more teach-ins in the late afternoon at a local school. 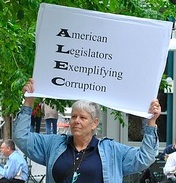 The protestors also sent a letter to Ron Scheberle, the executive director of ALEC and former lead lobbyist for Verizon, with a list of demands. They called for full disclosure of ALEC donors accompanied by the amount given, public awareness of which politicians are ALEC members, full access to "model" bills approved by legislators and lobbyists, and disclosure of which model bills have been the basis for legislation across the states. Scheberle did not respond to, or acknowledge, the letter.

Before the protest, the organizers at Miami University had already been working on other issues, including efforts to organize a union for graduate assistants on campus and helping to fight Ohio's Senate Bill 5, which would have limited the rights of public workers if it had not been repealed in November 2011. The students sent out a press release about the Cincinnati protest to media in Ohio, Indiana, and Kentucky, but only heard one response from an independent news outlet in Cincinnati. Meanwhile, investigative journalist Beau Hodai was also digging deeply into ALEC's role in prisons, immigration and other matters, following on his major investigation into these issues in 2010. (Hodai has since begun doing freelance investigative work with the Center for Media and Democracy (CMD)).

According to Adam Stant, one of the organizing grad students from Miami University, the students drew inspiration from the protests in Wisconsin earlier in the spring over the state's budget and Walker's anti-worker agenda. "If there hadn't been the series of protests in Wisconsin, I doubt we would have realized what was going on. The awareness happened like a snowball going downhill," he told CMD.

Four students from Purdue University came down to Cincinnati for the protest after they heard a speech by one of the Miami students where she described ALEC's influence. Three students from Louisiana State University (LSU), who had also been in contact with organizers in Ohio, also drove up to Cincinnati for the demonstration, as well as other groups from around the country. The Ohio organizers made arrangements for those from out-of-state to stay with people in the community who supported the protestor's message. Some of the protestors were trained to be "peace martials" to ensure the protest passed without violence.

"We had been learning about ALEC's efforts that were anti-labor, anti-student and anti-environment and it inspired us to come to Cincinnati for the protest," Nathan Anderson, a sophmore at LSU that attended the protest, told CMD. "This knowledge came to us during a time when disasters like the Arizona immigration bill and the BP oil spill were still so fresh in our minds. We always knew that corporations had an influence over our government, but we had never seen such a clear example of this before ALEC."

When they returned home, the students from Louisiana began reaching out to area labor, civil rights and social justice groups to organize a demonstration at ALEC's annual meeting in New Orleans in August 2011, which also brought together over a hundred Americans concerned about ALEC's corporate-funded legislative agenda and operations.

From Theory to Documentation on ALEC

A few months after the protests, in July 2011, CMD analyzed and made available over 800 "model" ALEC bills provided by a whistleblower. The bills, and CMD's continued analysis of these bills on ALECexposed.org, have allowed other journalists and concerned people across the country to document what skeptics of ALEC have been positing over the years.

In the view of CMD's executive director, Lisa Graves, the documents revealed the depth, breadth, and duration of a corporate-fueled agenda to remake American law and life. CMD's effort to investigate the bills, corporations, politicians, and special interest groups involved helped create a platform for people to connect the dots about their concerns about legislation being pushed in the states and in Congress. The "model" bills and resolutions undermine voting rights, advance climate change denial, make it harder for Americans injured by defective products to hold corporations accountable, and push environmental deregulation and the privatization of public schools, Medicare and Social Security, as well as limit the basic rights of workers to organize, among others.

"After the documents came out, the same newspapers that neglected to respond to our demonstration in Cincinnati, covered the story. The narrative on ALEC changed entirely from conspiracy theory to documented corruption," Stant told CMD.

Since then, concerned citizens have rallied at other ALEC meetings in New Orleans and Arizona and at ALEC's headquarters in Washington, D.C., demanding that the organization put an end to the extremist legislation it pushes in statehouses across the country.

Concerned citizens from across the country are still working tirelessly to shine a light on ALEC's actions and agenda. When Sloan first wrote about ALEC on the Daily Kos on November 9, 2010, there were only nine articles tagged as related to ALEC. Now there are over 1,600. Some of the original Daily Kos bloggers recently launched the American Legislative Transparency Project which aims to educate the public on ALEC through writing, teach-ins and protests.

On February 29, 2012, the Occupy Wall Street movement held over 90 actions across the country in an effort to highlight the agenda of ALEC corporate members and special interests. According to reports, this day of action included numerous non-violent demonstrations at ALEC corporations in several cities and even a "Corporate Debutante Ball" in Salt Lake City. Mock rats were lured out of the Wisconsin capitol by a "Pied Piper." Portland's march -- which included nearly 200 yellow ALEC umbrellas -- visited offices of ExxonMobil, McDonald's, Blue Cross/Blue Shield, Verizon, FedEx, Taco Bell, and Walgreens.

While the number of newspapers and television and radio stations covering ALEC grew tremendously over the first ten months since that first protest in Cincinnati, the tragic shooting of Trayvon Martin and the connection between ALEC and its ratification of the law cited by his killer's defenders as immunizing George Zimmerman of any liability -- as documented by CMD -- dramatically increased national attention and awareness. So too have the combined efforts of CMD with Color of Change, Common Cause, People for the American Way, Progress Now!, and numerous other national and local groups -- as well as countless concerned Americans -- exponentially increased public scrutiny of ALEC along with calls for corporations and politicians to leave ALEC.

To date, 13 companies have publicly announced that they are no longer funding ALEC -- including Procter & Gamble, Yum! Brands, McDonald's, Wendy's, Mars Inc., Coca-Cola, PepsiCo, Kraft Foods, Intuit, Blue Cross/Blue Shield Association, Reed Elsevier, American Traffic Solutions, and the Arizona Public Service Corporation, and over a dozen elected officials have also left ALEC. But the campaign to expose ALEC and its role as a "charity" that focuses on giving corporations an equal "VOICE and VOTE" with elected officials on templates to change the law -- out of the view of the press and public -- continues to grow stronger.

"The exposure of ALEC was made possible through a chain of events that started with the activism in Wisconsin. It's about normal people doing small things coming together in a way that makes a big impact," Stant said.