Americans for Prosperity (AFP), the Koch-funded astroturf group, held a Tax Day rally in Madison on April 14. This year's Tax Day rally was dramatically smaller than the 2009/2010 rallies at the Capitol and even smaller than last year's rally which took place in the sleet and the snow at the height of the Wisconsin Uprising. With the sun shining down on this year's rally, this year's themes included the supposedly fake "War on Women" and claims about how well Governor Scott Walker's policies are working for Wisconsin.

Wisconsin's chapter of AFP has been very supportive of Walker and his policies over the past year, running ads supporting the passage of Walker's union-busting "Budget Repair Bill," that sparked unprecedented protests in February and March of 2011. In more recent months, they have also partnered with the conservative belief tank, the MacIver Institute, to launch an expensive TV ad and Internet campaign called "It's Working," suggesting that Walker's collective bargaining measure and budget cuts have been successful.

James T. Harris, a right-wing radio talk show host and Fox News contributor, emceed the rally. The speakers list was stacked with talk radio personalities, Wisconsin Tea Party activists, and a surprise visit by Wisconsin's Lt. Governor, Rebecca Kleefisch, who, along with Walker, is facing a recall election on June 5.

Wisconsin Moving in the Right Direction? 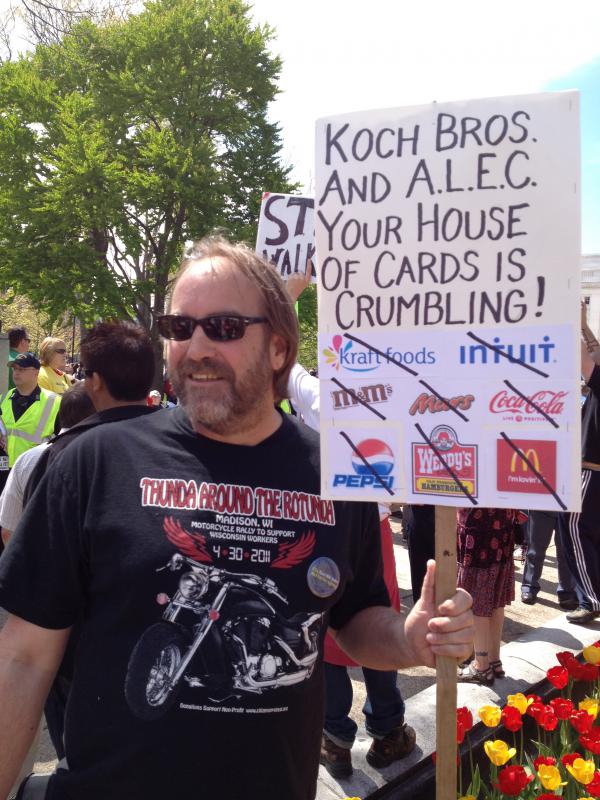 Walker's supporters held pre-printed blue "Stand with Walker" signs and green "Walker for Sportsmen" signs. Many expressed their admiration for the embattled governor. "I voted for Scott Walker only to defeat light rail and I ended up thrilled with everything he's done. A balanced budget in Wisconsin is a rarity in the last fifteen years [and] we have one now. I see Wisconsin moving forward under Scott Walker," said rally attendee Deb Hanson from Monona, Wisconsin.

Luke Hilgemann, the new State Director of AFP, said that  Wisconsin was moving in the right direction under Walker's leadership. "We have a balanced budget that did not raise taxes ... we didn't lose thousands of jobs." Walker ran in 2010 on a promise to create 250,00 jobs. According to the latest numbers in the Wisconsin State Journal, "the latest revisions show the state gained only 900 private-sector jobs since January 2011. It actually lost 12,500 total non-farm jobs, a number that includes public jobs." Hilgemann is Assembly Majority Leader Scott Suder's former chief of staff. In that role he helped advance "one of the most conservative legislative agendas in state history which included collective bargaining reforms, Conceal and Carry, Voter ID, and Castle Doctrine," according to his AFP bio. His hire indicates that AFP is expanding as it prepares to spend hugely on "issue ads" during the Wisconsin recall.

The highpoint of the rally was an address by Kleefisch, who is being challenged in the recall election by firefighter Mahlon Mitchell. "I'm here with my little girls today, doing that thing, parenting, that they think isn't work," she said as she stood on stage with her two young daughters. She told the crowd, "America's eyes are focused right here, today. ... We have a choice right now, of moving backward, or forward."

Kim Simac, a Wisconsin Tea Party activist, also took the stage to say "There is no war on me" in a response to recent coverage of a "war on women" that numerous people have said Republicans are waging from state to state and nationally through changes limiting access to birth control, requiring intrusive medical exams, or limiting equal pay laws, for example. Simac gained notice in the summer of 2011 when she ran against Democratic Senator Jim Holperin in a recall election, and was unable to name a single bill that she supported or opposed.

Her sentiments were mirrored by talk-radio host Dana Loesch, who was wearing a "Remember Breitbart" t-shirt to honor the passing of the right-wing media apparatchik. Loesch tried to "flip the script," saying that it was Democrats not Republicans who were waging a war on women, referring to, "that mentality that didn't want to give women the right to vote, that progressive mentality." (Despite this assertion, bills to make it more difficult for American citizens to vote, the so-called "Voter ID" bill echoing the "model" of the American Legislative Exchange Council, have been supported by numerous ALEC legislators from the GOP.)

During right-wing Madison talk show host Vicki McKenna's speech, a group of counter protestors made their way to the front, yelling, "Vicki hit a cop," referring to an incident a few years ago when she got in trouble with law enforcement while intoxicated at a U2 concert. She then gained notoriety during the Wisconsin Uprising for harshly criticizing policemen and firefighters for going to the Capitol to protest. John "Sly" Sylvester, a progressive talk show host in Madison, held a sign with McKenna's mugshot, and held it up in front of the camera that was broadcasting on the big screen on the stage.

A group of anti-Walker protestors remained at the edge of the crowd throughout the rally. "I'm here to counter-protest, to try and make some of the tea party followers realize that they're just kowtowing to corporations and that their republican leadership is lying to them," said Andrea Bilgur from Madison, Wisconsin.

Arthur Kohl-Riggs, an activist and videographer, who turned in enough signatures to run in the Republican Primary against Walker, was there talking to potential Republican primary voters. Donning Abraham Lincoln attire, Kohl-Riggs calls Walker the "fake Republican" and declares he wants to return the Republican party back to its progressive roots.

He explained his platform to passersby: "Scott Walker's policies are extreme and radical. He does not embody the values or ideals of the party of Lincoln. The Republican Party was founded in Wisconsin as an pro-labor, abolitionist party." Most of the rally attendees seemed unaware that Walker might face a challenger in the primary.

Luke Hilgemann closed up the rally by announcing that 6,300 had been in attendance. Earlier in the program the crowd had been asked to text "media" to a specific phone number, in order for organizers to "accurately" estimate the number of people in attendance. But experienced observers noted that the crowd did not spill onto the lawn as it had in previous years and put the protestor number at closer to 1,000-2,000.

I've attended every AFP tax-day rally in Madison, and they're having a really hard time driving attendance despite a very heavy PR effort and providing free buses from all over Wisconsin. Check out how small the crowd was this year: tinyurl.com/7pyobj3