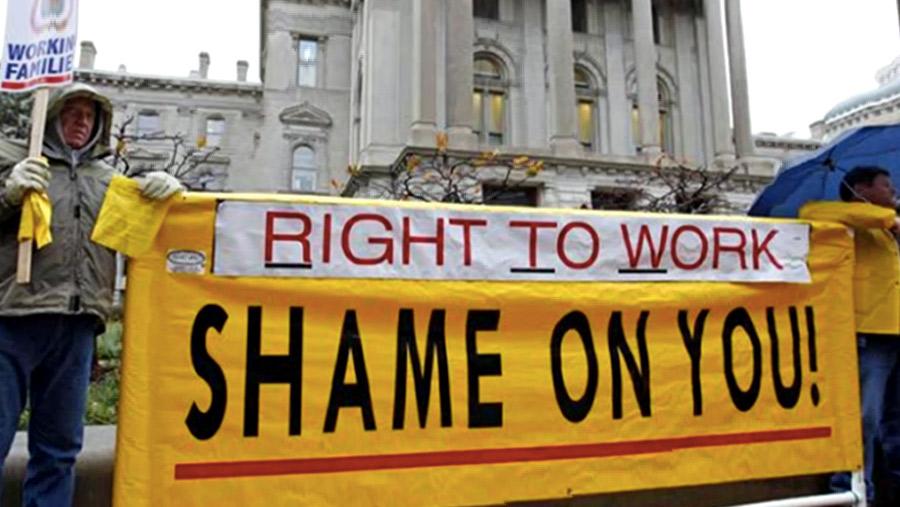 On the first day that the Kentucky legislature got underway with a newly elected Republican House, a Republican Senate and a Republican governor, the Koch brothers' Americans for Prosperity group blew the whistle and legislators jumped to do their bidding.

This week, the Speaker of the House Jeff Hoover rammed through the legislature three bills to break the back of unions and lower wages for highly-skilled construction workers.

It was bare-knuckled partisan politics. "We can pretty much do whatever we want now!" crowed GOP Kentucky Rep. Jim DeCesare behind closed doors.

You have only to look at Trump's narrow victory in Rust Belt states to understand why the GOP is desperate to get rid of the Democratic Party's boots on the ground.

Trump won by narrow margins in Wisconsin and Michigan and took Indiana. These are three states where unions -- the only organized voice for working families able to stand up against CEOs and corporate elites -- were crushed by right-wing governors after Obama won them in 2008.

In Wisconsin, union membership is down an estimated 133,000 since Governor Scott Walker destroyed a 50 year tradition of peaceful collective bargaining for higher wages. Trumps margin of victory? Less than 30,000.

Tracy Sharpe of the Koch-backed State Policy Network (SPN) boasted of the success of the union-busting strategy in a recent Wall Street Joural article entitled "The spoils of a Republican State Conquest." "When you chip away at one of the power sources that also does a lot of get-out-the-vote. I think that helps for sure," she chirped.

The three bills being rushed though committee hearings this week borrow heavily from the American Legislative Exchange Council (ALEC) library of bills crafted by corporate lobbyists and politicians behind closed doors at ALEC meetings. ALEC and SPN groups work hand in hand to present the bills as innovative public policy, but scratch the surface and a pay to play model appears.

ALEC's, Michael Bowman, helpfully explained the key to success at a recent SPN meeting. "Legislators are not the trailblazers of developing policies," Bowman said according to a new report today in ProPublica. "They're actually the retail consumers."

Kentucky's HB1, dubbed "right to work" by supporters, harms unions by allowing workers to opt out of paying their fair share for union representation. The bill tracks the ALEC model as this side by side shows. SB6 makes it harder for unions to collect dues. ALEC calls this "paycheck protection." Both measures weaken and defund unions.

HB3 repeals the 76-year old prevailing wage law that rewards highly trained and skilled building trade workers who repeatedly train on new materials and technology with higher wages. This idea also borrows from the ALEC library, which contains a number of bills to lower wages, including by preempting local "Fight for 15" and "Raise the Wage" ordinances at the state level. Charles Koch even argues that eliminating the minimum wage would help the poor.

According to the U.S. Department of Labor, 11 percent of Kentucky's wage and salary workers are union members, these include distillery workers, miners, auto workers and a significant number of public employees and public school employees. In 2014, the Center for Media and Democracy exposed ALEC's efforts to achieve local "right to work" ordinances in Kentucky in the New York Times.

Many Kentucky workers and their families showed up to testify against the bills being rushed through various committees this week, but the Koch machine was prepared, taking over the hearing room Wednesday before the bill was called up, blocking the workers waiting to enter and cheering the Governor's entrance to the committee room for the TV cameras. Only two people were able to speak out against the bill: Bill Londrigan, President of the Kentucky State AFL-CIO, who explained that no worker can be forced to join a union and Anna Baumann, at the Kentucky Center for Economic Policy, who explained how the measure harms workers, wages and the economy.

Julia Crigler, the State Director for Americans for Prosperity-Kentucky and a legislator with ties to the American Legislative Exchange Council, House Speaker Pro Tempore David Osborne (R-59), spoke for the bill.

The effort in Kentucky follows a playbook utilized by Team Koch in Indiana, Wisconsin, Michigan, and West Virginia. In all of these states, the anti-worker bills track template legislation written and promoted by ALEC, which receives a significant part of its funding from Koch Industries and other entities controlled and funded by the Koch brothers.

In addition, all of these states received support from "think tanks" in the Koch-funded State Policy Network. In Michigan, it was the Mackinac Center; in Wisconsin, the Wisconsin Policy Research Institute; in West Virginia, the Public Policy Foundation of West Virginia; and in Kentucky, the Bluegrass Institute.

The Koch astroturf army called Americans for Prosperity lent a thin veneer of support to the measure in each state, sponsoring tiny rallies in Wisconsin and Michigan that were overwhelmed by mass rallies in opposition to the bills.

Rally at the Kentucky Capitol Saturday

Using parliamentary tricks by labeling the bills as "emergency legislation" the GOP is hoping to avoid a showdown with the citizenry as there was in Wisconsin where protest rallies regularly topped 100,000 as Democratic legislators fled the state and students and union supporters occupied the Capitol.

The bills were moving so fast that most of the state's voters may only get word after the governor signs the measures into law.

The Kentucky AFL-CIO is holding a rally at the capitol at 8:30 a.m. this Saturday and is urging citizens to call their legislators.

A tweet from Speaker Hoover yesterday suggests that a final vote on the bills will come soon, "When you are wrestling for possession of a sword, the man with the handle always wins."

F. Vincent Vernuccio who works at the Koch-funded Mackinac Center and travels the country testifying as an "expert" on the bills said that Missouri and New Hampshire could follow Kentucky this year. Both Missouri and New Hampshire are trifecta Republican states. In West Virginia, the election of Governor Jim Justice, a Democrat who was previously a Republican, may give the GOP a second chance at passing the law, which was vetoed by the Democratic governor last year.

The Center for Media and Democracy published ALEC's cookie-cutter "model" bills in 2011 at Alecexposed.org. Follow the news @ALECexposed #ALECexposed. David Armiak contributed to this article.