Paying for Cancer Treatment for Children in America with a Car Wash, Bake Sale and Fish Fry | PR Watch

Paying for Cancer Treatment for Children in America with a Car Wash, Bake Sale and Fish Fry

"It shouldn't be this way," read the subject line of an email I received Friday morning from a conservative friend and fellow Southerner. "People shouldn't have to beg for money to pay for medical care."

At first, I thought he was referring to my column last week in which I wrote about the fundraising effort to cover the bills, totaling hundreds of thousands of dollars, that the husband of Canadian skier Sarah Burke is now facing. Burke died on January 19, nine days after sustaining severe head injuries in a skiing accident in Park City, Utah. I noted that had the accident occurred in Burke's native Canada, which has a system of universal coverage, the fundraiser would not have been necessary.

But my friend was not writing about Sarah Burke. He wanted to alert me to another fundraiser, this one on Alabama's Gulf Coast, to help pay for the mounting medical expenses for a beautiful 13-year-old girl fighting for her life at USA Children's & Women's Hospital in Mobile, Alabama.

In late November, Caroline Richmond was rushed to the hospital after collapsing on the way home from school. Doctors quickly determined she'd had a stroke and required immediate surgery. The bad news just kept coming. The stroke had been caused by leukemia.

In the weeks following brain surgery, Caroline had to undergo chemotherapy. She later became so ill that she was put on a ventilator and had to be fed through tubes. Although she is still listed in critical condition and faces a bone marrow transplant, Caroline has made progress. She was taken off the ventilator and tubes last week and is now eating solid food for the first time since the stroke.

As it turns out, Caroline is one of more than 50 million men, women and children who do not have health insurance in the United States, which is why her family is in the same predicament as Sarah Burke's. Caroline's father, Dallas, is self-employed and, like millions of other Americans who do not work for a company that offers health benefits, has not been able to find affordable coverage for his family.

A friend of the Richmonds, Robin Smith, told me Dallas is one of the hardest working people she's ever met. She said he owns a coin-operated laundry and has "two or three" other jobs to make ends meet. "He works round the clock," she said. "You never see him when he's not working."

Knowing that Dallas and his wife, Christy, are worried not only about their daughter but also about the real possibility they might be forced into bankruptcy and lose their home because of the medical bills, Smith has joined other friends of the family to raise money. Caroline's classmates and teachers have put "Cups for Caroline" in all the homerooms at Fairhope Middle School, where Caroline is an eighth-grader. They've also held car washes. 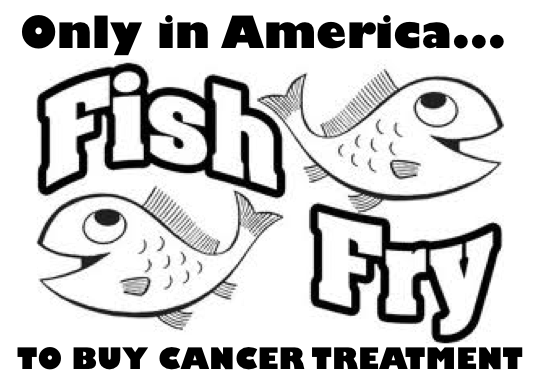 Last night they were scheduled to host a bake sale and fish fry at the American Legion Post in Fairhope. It was that event, also posted on a Facebook support page, that my friend brought to my attention. Until then, I had never heard of Caroline Richmond. I suspect you hadn't heard of her either. I am writing not only to spread the word, but also to ask that you think for a moment about walking in the Richmond family's shoes.

It is important to understand that almost all of us who do have health coverage through the workplace are just a layoff or plant closing away from joining the Richmonds among the uninsured. Those of us who are self-employed like Dallas Richmond or who work for small businesses that can no longer pay for coverage are increasingly unlikely to find decent coverage that we can afford.

Hundreds of thousands of families file for bankruptcy and lose their homes every year nationwide because of medical debt. Many of those people actually have what they thought was adequate insurance, but find that they still have to pay far more out of their own pockets to cover thousands of dollars in bills than their budgets will allow.

My column on Sarah Burke provoked many comments, some from people who essentially wrote, "too bad, so sad." In their opinion, Burke shouldn't have been taking risks on the ski slopes in Utah in the first place. She should have bought coverage that would have protected her in the U.S.

Maybe so. But I wonder what those people, all of whom condemned "Obamacare," will say about Caroline Richmond. When the reform law is fully implemented in a couple of years -- assuming it goes forward -- the Richmonds should be able to find coverage at an affordable price. That's what reform was all about. To make sure that American families don't have to lose their homes when someone gets sick and to make sure that insurance firms can no longer engage in practices that have swelled the ranks of the uninsured and underinsured.

Caroline's story is not unique. Tragedies like her's occur so often, in fact, that they rarely make the news anymore. But it is precisely because they are an everyday occurrence that health care reform was so urgently needed. We have been led to believe by opponents of reform that our health care system is the best in the world. The reality, of course, is that, while we do indeed have some of the world's best doctors and hospitals, the system in which they operate has become increasingly dysfunctional and unnecessarily expensive. This is why the reform law, despite its flaws, must go forward.

To learn more about Caroline Richmond and how to make a donation, visit the Facebook page established by her family's friends.

So please explain Mr. Potter how Obamacare will circumvent these situations? It is much more likely the so-called affordable Obamacare will be high deductible, high co-pay and high prescription cost garbage. This is already a fact with companies who still offer healthcare benefits, where they increase the cost to the employee and or reduce benefits so out of pocket expenses are increased and can easily bankrupt you for a serious illness. Lets not forget that since there is more out of pocket expenses before benefits even kick in people will put off seeing a doctor and the illness may become extreme. Surprising you would post a campaign ad for Obama, is this what CMD stands for now?