Graves began the conference by telling reporters that in looking at ALEC's model legislation she was "shocked and appalled to learn that corporations were actually voting as equals with politicians behind closed doors on legislation to change our rights." She cited the outrage leveled at the multinational, global companies who, as members of ALEC, have wielded an enormous amount of influence in changing the law through ALEC bills.

Other panelists – a New Orleans English teacher, a local reverend, a Republican school board member, a Wisconsin mom, and a small business owner – echoed Graves' sentiment with anecdotes describing their struggle to cope with the consequences of ALEC model legislation that had become law.

Nicole Schulte from Wisconsin spoke of her harrowing experience trying to secure a free voter ID for her recently disenfranchised 19-year-old son. Because of Wisconsin's new voter restrictions, Schulte had to take him to a DMV for an approved form of photo identification.

When Schulte handed the DMV clerk her son's bank statement as proof of residency, the clerk asserted that there was not enough bank activity on the account to legitimize the document. After a bit of haggling, Schulte was allowed to proceed, but not before discovering an unknown aspect of the Republican-passed bill in Wisconsin.

"The next clerk tried to charge my son $28 for his voter ID card. Then he noticed that my son checked a box allowing him to get the ID for free. Apparently the person getting the card has to request that he be given the card for free," said Schulte. 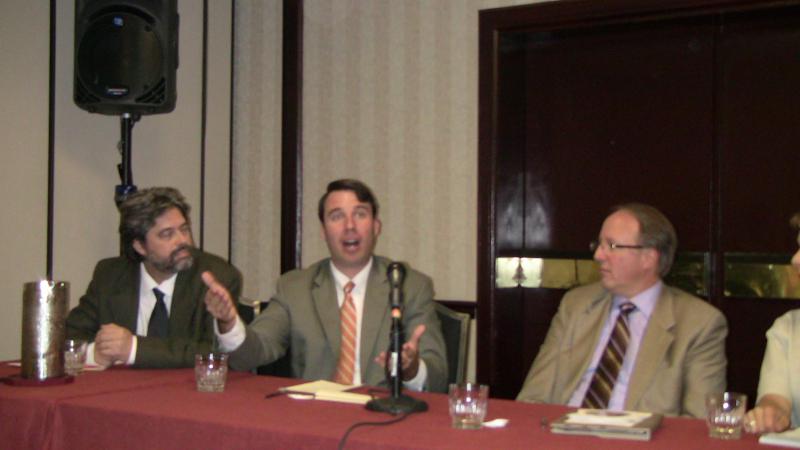 A pair of local community leaders passionately detailed how New Orleans' schools and hospitals have deteriorated due to the implementation of ALEC's free-market, privatization agenda. According to Brett Bonin, a New Orleans Parish School Board Member for District 3 and local Republican leader, the Louisiana Department of Education has advocated siphoning off nearly $100 million in school vouchers and tax credits, despite teacher layoffs and funding cuts.

"The data does not support school privatization," said Bonin. "I can tell you this crosses party lines, this crosses a lot of different ideologies. For us, it's about children. We're basically selling out our children. Everybody needs to know about [ALEC], and understand that we need to get back to accountability, transparency, and democracy. We shouldn't be relying on some behind the scenes group to decided where to spend money on our kids."

It's because of ALEC, Bonin added, that politicians at the lowest rung of the political ladder are feeling the harmful effects of model legislation.

Reverend Dr. Willie Gable Sr., a member of the African American Ministers Leadership Council, pointed to the injustice of Louisiana's recently-passed bill targeting health-care reform, which he said was "put together by [ALEC] and pushed through this legislature."

"It is almost unimaginable that this bill would be passed in a state that ranks last in nearly all areas of health care," said Gable Sr.

The notion that ALEC's model legislation ignores the economic realities and unique circumstances of different states resonated with the testimony of Todd Landfried, a partner at a regional policy consulting firm, and member of Arizona Employers for Immigration Reform. The enforcement of anti-immigrant laws, such as the controversial Senate Bill 1070 in Arizona, hurts farmers who lose labor, and profits.

After a round of questions, panelists were given the opportunity to offer closing statements. The resounding theme of these final speeches was that ALEC is a group people everywhere need to know about. As Todd Landfried said, "We'd like to have our voices heard again."