Will “Bitches” and “Turds” Decide the Fate of Wisconsin? | PR Watch

Will “Bitches” and “Turds” Decide the Fate of Wisconsin? 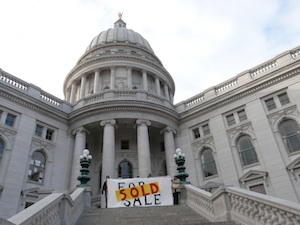 This week, Wisconsin Attorney General JB Van Hollen charged into court in defense of secret government. He argued that when legislators break the law -- the courts can't do anything about it. Apparently legislators, like Senate Majority Leader Scott Fitzgerald, have "immunity" from the enforcement of their very own laws.

Welcome to "Fitzwalkerstan," where novel interpretations of long-established law are a daily occurrence and the billable hours are stacking up.

Wisconsin's open meetings law requires 24 hours' public notice of meetings or two hours in emergencies. The amended collective bargaining bill was given less than two hours. As word spread via Facebook and Twitter that legislators were pulling a fast one, hundreds of citizen's showed up at the Capitol, but could not get in to watch proceedings. Shut out, they were forced to chant "Shame, shame, shame," under Senate windows.

This is just the latest legal madness from Fitzwalkerstan. To ram the astonishingly unpopular proposal through, the Governor and his henchmen had to finagle:

These astounding events have many Wisconsinites shaking their heads. "Procedures and open government are important in Wisconsin, and I can't remember another time when these procedures have been this disrespected," says University of Wisconsin law professor Bill Whitford, a life-long resident of Madison.

The courts have ruled against Walker twice so far. Thank heavens for the courts! A breath of sanity in an insane world! Or are they?

The reputation of Wisconsin Supreme Court took a pounding this week after the Milwaukee Journal Sentinel released emails showing that bickering on the Court had reached a new low. David Prosser, a sitting justice, acknowledged calling the state's first female Supreme Court Justice "a total bitch," and threatening to "destroy" her. But he nobly defended his actions telling the paper he had been "goaded" into making such statements by the respected Chief Justice.

Prosser is seeking reelection April 5 and is up against a respected Deputy Attorney General JoAnne Kloppenburg. Some months ago, Prosser's campaign released a statement saying that his candidacy would "complement" the new Governor and the new GOP legislature. Now, Prosser denies having approved the statement. At the first debate between the candidates this week, citizens were expecting a lively debate, but Prosser again went deep into uncharted territory, initiating a discussion on the weighty legal matter of "turds." Prosser quoted a comment on his opponents Facebook page: "Stop the turd, vote Kloppenburg." "Now, am I the turd?" Prosser asked. "That's totally inappropriate."

What other terrible rhymes lurk in the random comments of 8,700 Kloppenburg Facebook fans?

The case filed by Wisconsin Attorney General Van Holland is in appellate court right now but may end up in the Wisconsin Supreme Court next week, where the polarized Court may be forced to duke it out to the utter horror of average Wisconsinites who think the state is quickly spiraling out of control. Walker's poll numbers are tanking, showing that he would lose a "do-over" by seven points. But that do-over may not come for a year. In the meantime, Wisconsin will be awash with Senate recalls, big money ads and dirty tricks the likes of which this state -- which prides itself on good government and clean politics -- has never seen. An independent and adult judiciary will be more critical than ever.

The Madison-based Center for Media and Democracy has been reporting the events from the Wisconsin Capitol, focusing on the politicians, corporations and spinmeisters behind the assault on working families. Visit us at PRWatch.org.

I know I won't be believed, but as the facebook poster who originally posted the increasingly infamous "Stop the Turd" post, I also recommend "Kloppenburg defeats Prosser" on YouTube
...Incomprehensible Shouting will preempt and supersede local dialects. http://www.theonion.com/video/incomprehensible-shouting-named-official-us-langua,19417/
...Subsequent reports go downhill from there. Really.
You folks should really use a copy editor. It's means it is - it's not the possessive. Walkers, as a possessive, needs an apostrophe. Candidate, not canidate. Complement, not compliment. This kind of carelessness drives me up the wall and there's no reason for it.
instead of just showing yourself as another anonymous jerk, you could drop them a courteous email pointing out the errors. I've done that on several occasions and they've always appreciated it.
And they are resorting to these illegal tactics because they never ran their campaign on any of it bec they never would have been elected -- remember how Walker referred to the bill as a "bomb" in his phone conversation with the fake David Koch.