The Devil Is in the Lack of Details: The Defense Department's Media Contracts | PR Watch

The Devil Is in the Lack of Details: The Defense Department's Media Contracts

Each time, concerned citizens, media critics and watchdog groups like the Center for Media and Democracy have called for a full accounting of the government's use (and misuse) of public relations techniques and contractors. And, slowly, more information has surfaced -- though nothing approaching the transparency a healthy democracy requires.

On February 13, the GAO released a 160-page report on the recent media contracts of seven federal departments. The data on government contracts with private PR firms, ad agencies, media companies and individual reporters is another piece in the propaganda puzzle.

However, the GAO report should be read with several caveats in mind. It is based on self-reporting by the departments, and their information was not independently verified. The private contractors are not named, and whether they had subcontractors is not indicated. Contract descriptions are brief and often vague. The products generated under the contracts -- the "deliverables" -- are not listed. The PR activities of government employees are not included. And what about the eight other cabinet-level departments and the independent federal agencies?

Still, the report provides the first serious narrative of government media activities since the U.S. House Committee on Government Reform detailed federal PR spending in January 2005. Taken together, these two accounts make clear that the amount of taxpayer dollars going to private PR firms has increased significantly over the last several years.

The Wages of Spin

During the second Clinton term (calendar years 1997 through the end of 2000), government PR contracts averaged $32 million per year. Over the first Bush term (calendar years 2001 through 2004), PR spending averaged $62.5 million annually. From fiscal year 2003 to mid-fiscal year 2005, an average of $78.8 million went to private PR firms per year -- from just seven federal departments.

In short, Bush not only doubled PR spending relative to Clinton, but he keeps increasing the size of the propaganda pot. As the House Committee on Government Reform report concluded last year, "While not all public relations spending is illegal or inappropriate, this rapid rise in public relations contracts at a time of growing budget deficits raises questions about the priorities of the Administration."

During this steady expansion of PR budgets, there have been two spikes, according to data from the House Government Reform Committee (see graph, right).

In 1999, several agencies, including the U.S. Mint, Transportation, and Health and Human Services Departments, saw a one-year boost in PR spending. In contrast, the 2003 to 2004 surge was almost totally fueled by the Centers for Medicare and Medicaid Services (CMS). CMS's contracts with private PR firms ballooned from $2.5 million in 2002, to $31.2 million in 2003, to $55.9 million in 2004. Judged by the ongoing, widespread confusion and frustration with the new Medicare drug plan, these tens of millions of dollars weren't well spent.

According to the House committee data, the Defense Department, Army and Navy are almost reticent in their PR activities, together spending $10.8 million from 2001 through 2004. However, the GAO paints a very different picture of the big media spenders. The Pentagon is the media fiend, according to the GAO report, responsible for $1.1 billion of the $1.6 billion in federal media contracts over 30 months.

This discrepancy is mostly due to the GAO's inclusion of all media contracts -- not just for PR, but also for advertising, media buys, website development, press releases and the like. But several big-ticket Pentagon media contracts listed in the GAO report that read like classic PR jobs are "missing firm data" -- and therefore not classified according to contractor type. These include training Army Public Affairs Officers, developing "briefing products and input documents," and conducting "message development" and "news story development."

If even some of these unclassified contracts were with PR firms, then the GAO report underestimates the Pentagon's PR spending, perhaps significantly. And there are other reasons why the Defense Department's media contracts warrant closer scrutiny.

News accounts of the GAO report, as well as a press release put out by the members of Congress who requested the study, mentioned some of the smaller Pentagon contracts. It is easy to understand why an Air Force-sponsored "Stars and Strikes" bowling tournament, Coca-Cola branded "victory T-shirts," NASCAR promotion ads, or embroidered golf towels for youth tournaments might catch a reporter's eye. But among the sea of small and carefully detailed contracts are a few major efforts described just well enough to raise eyebrows.

One such contract -- unclassified as to contractor type -- entailed "extensive research ... for message development that presents the Army's strategic perspective in the Global War on Terrorism." Worth $2.5 million from 2003 to 2005, the contract included "developing communications plans ... and conducting analysis regarding the most effective way to respond to issues raised by the key stakeholders and by influencers." A similar $1.1 million PR contract in 2005 involved "media pitches, speakers service and bureau, and news story development in support of Soldiers in the Global War on Terror."

Another contract -- again "missing firm data" -- was for "a senior analyst to analyze the perceptions, activities, and events surrounding the Western Hemisphere Institute for Security Cooperation and assist in developing public affairs plans for other Army personnel issues." The Army paid nearly $300,000 for this analyst, between 2004 and 2005.

The analyst's work appears to be part of the "Strategic Communications Campaign Plan" drawn up in mid-2002 for the Army's Western Hemisphere Institute for Security Cooperation (WHINSEC, formerly called the School of the Americas). The WHINSEC PR plan (available via our SourceWatch article on the Institute) budgeted $246,000 for one contractor, one webmaster, media monitoring software, transport and printing.

As I reported previously, after three years of WHINSEC's "consistent, programmed, proactive public affairs effort in direct support of the Institute," the Army could claim partial success. Media coverage of WHINSEC did not improve, and Congressional attempts to close the Institute actually gained support. But attempts to build "third-party (non-Army) public support" bore fruit, as exemplified by Human Rights Watch giving its first-ever WHINSEC lecture during the Institute's August 2005 "Human Rights Week."

Also listed in the new GAO report is the Defense Department's "Mullen Advertising Contract," worth $47.6 million from 2003 to 2005. That work included direct mail, "media relation services" and websites associated with JAMRS, the Joint Advertising Market Research and Studies program. JAMRS uses polls, surveys, campus campaigns, marketing data and analyses to increase recruiting and retention rates for all branches of the military.

One JAMRS website contains a presentation explaining how to use "marketing segmentation capabilities" to "understand and improve military recruiting efforts." According to the presentation, the "lifestyle characteristics of the high performing segments" -- that is, the people most likely to join the military -- include buying fishing equipment, hunting and reading Car Craft. They do not make a "conscious effort to recycle," "contribute to PBS," or read the Wall Street Journal.

Other military recruiting contracts listed in the GAO report include "traditional and nontraditional media" outreach for the Marines, "prospect relationship management" for the Navy, and promotional videos, books and calendars for the Air Force. Rounding out the more expensive, more involved and more provocative Pentagon media contracts are those supporting two major outreach efforts, America Supports You and Operation Tribute to Freedom.

As Laura Miller reported previously for PR Watch, the AmericaSupportsYou.mil website was launched in November 2004 and mentioned by President Bush during a June 2005 national address at Fort Bragg, North Carolina. After examining the website, Miller asked, "Could the site be nothing more than another Pentagon attempt to boost public support for war and distract the public's attention away from criticisms?"

The GAO report's revelation that the Office of the Assistant Secretary of Defense paid a PR firm more than $1.3 million between 2004 and 2005 to design and execute "America Supports You" suggests that the answer to Miller's question is yes. The America Supports You contract included "planning, branding development and message promotion," "outreach events and partnership development" and "design and implementation of media, marketing, and advertising programs, including related collateral material."

Operation Tribute to Freedom (OTF), according to its website, "refuses to leave a Soldier's story untold. By working with Army Public Affairs Offices ... OTF identifies ongoing media, speaking, and recognition opportunities to ensure that homecomings last longer than one day and that American Soldiers stay connected with the American public. ... Operation Tribute to Freedom will help the American people better understand the Global War on Terrorism -- one Soldier's story at a time." 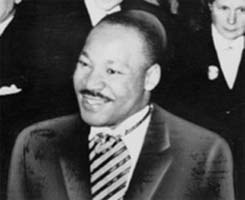 Like the Four-Minute Men, veterans of the current wars in Iraq and Afghanistan who register on the OTF website are provided with suggested scripts for their talks. OTF's Black History Month Speech begins, "I'm honored to be speaking here at [name of event] and to have a chance to reflect on the rich heritage of African Americans." Ignoring the civil rights leader's anti-war stance, the OTF speech includes a quote from the Rev. Martin Luther King, Jr.: "The ultimate measure of a man is not where he stands in moments of comfort and convenience, but where he stands at times of challenge and controversy."

According to the GAO report, the Army gave private media firms more than $1.4 million in 2004 to get Operation Tribute to Freedom off the ground. A PR firm was paid $1.1 million, to "augment the Army Public Affairs, Outreach Division, staff in the execution and support of the program Operation Tribute to Freedom." Another contract, worth more than $292,000, involved constructing websites for OTF and for "an internal Army command information Web site."

The United States is facing not only "growing budget deficits," as the House committee report noted, but also multiple wars overseas, natural disasters at home, a shaky economy, and shrinking resources for such basic infrastructure as education and health care. It is against this background -- and, likely, because of it -- that federal spending on PR firms and other media contractors is increasing.

Are these expenditures warranted? Are they in keeping with existing U.S. laws against domestic "publicity or propaganda" campaigns? The Bush administration's record of dealing with these questions does not inspire confidence.

With regard to video news releases, the GAO ruled repeatedly that segments not announcing their government source to viewers are illegal covert propaganda. "The publicity or propaganda restriction helps to mark the boundary between an agency making information available to the public and agencies creating news reports unbeknownst to the receiving audience," the GAO wrote. The administration, through the Justice Department and the Office of Management and Budget, directed federal agencies to ignore the GAO rulings.

The Bush administration has also eroded once-sacrosanct prohibitions against exposing domestic audiences to propaganda intended for foreign audiences. In December 2005, the Pentagon's inspector general ruled that news websites run by U.S. military regional commands in Southeastern Europe and North Africa do not violate U.S. law -- though their content is readily available to U.S. web surfers. In January 2006, the National Security Archive declassified the Defense Department's 2003 "Information Operations Roadmap." The heavily-redacted document admits, "Information intended for foreign audiences, including public diplomacy and PSYOP, increasingly is consumed by our domestic audience and vice-versa." However, the roadmap asserts that propagandizing U.S. audiences is permissible, as long as that was not the government's intent.

Intent is notoriously hard to prove, and propaganda is propaganda. News media are not playthings to be shaped for political gain, but bedrocks of democracy. The U.S. government must make public detailed information on all its PR and other media work, and Congress must revisit the "publicity or propaganda" restrictions in light of the modern information environment. Otherwise, the U.S. public will find itself in a similar situation as the Iraqi public -- discounting news items favorable to the U.S. government as likely products of propaganda campaigns.