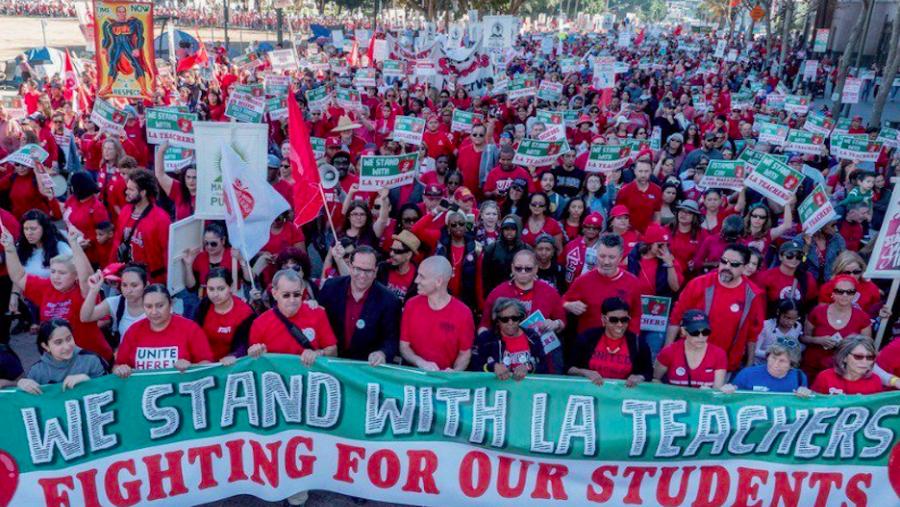 On Saturday, thousands of teachers, students, and other public school supporters marched in downtown Los Angeles to the Broad Museum to protest billionaires such as Eli Broad that fund the growth of charter schools, many of which are not unionized and divert students from district schools.

Eli Broad is one of the billionaire philanthropists taking over public education. He founded Fortune 500 companies in insurance and real estate -- contributing to the build-out of suburbs of Detroit, Phoenix, and Los Angeles -- but has no known expertise or experience in public education.

Broad and allied wealthy school privatization supporters were among the biggest contributors to the $41 million campaign war chest for California state superintendent candidate Marshall Tuck, who conceded to the teachers union-supported candidate, Assemblyman Tony Thurmond, on November 17. The same donors also spent more than $20 million to bolster the unsuccessful 2018 primary run of charter-supporting California gubernatorial candidate Antonio Villaraigosa, according to the Sacramento Bee.

Broad is one of several mega-billionaires -- along with Bill Gates, the Koch brothers, and the Walton family -- who have spent hundreds of millions on education think tank research and charter schools, shaping current trends in what they call education reform. They insist not only that public schools are failing but that spending public money on privately managed charter or vouchers schools is the path to redemption. They hit the jackpot when one of their own, Betsy Devos, graduated from billionaire philanthropist advocate to U.S. Secretary of Education in the Trump administration.

Investing a relatively small amount of the more than $600 billion a year currently spent on K-12 education yields a big bang for the billionaire's buck. As Dissent reported in 2011, "A few billion dollars in private foundation money, strategically invested every year for a decade, has sufficed to define the national debate on education; sustain a crusade for a set of mostly ill-conceived reforms; and determine public policy at the local, state, and national levels."

Never mind that parents like those protesting in L.A. over the weekend want higher teacher pay, smaller classes, and fewer standardized tests. The billionaires want to create a new private system.

Eli Broad's worth is estimated at $6.7 billion. He funds the Eli and Edythe Broad Foundation, the Broad Prize for Public Charter Schools, the Broad Museum in downtown L.A., and the Broad Center, which includes the Broad Academy and the Broad Residency in Urban Education.

Broad's niche in the billionaires club is the education pipeline. His Broad Academy trains young graduates in his theory of education and positions them for leadership positions in schools and school districts. It was founded in 2002 with the goal of training people both with and without any education experience and placing them as superintendents in "a third of the 75 largest school districts -- all in just two years," according to Education Week. As of that 2011 article, the program had taken longer than planned, but had almost reached that goal, placing superintendents in 21 of those 75 districts, including New York City, Los Angeles, and Chicago.

Broad speaks deliberately about "venture philanthropy" and "lasting impact." By 2012, a Broad Center memo (quoted by the Washington Post) boasted:

We have filled more superintendent positions than any other national training program, [including] over 30 sitting superintendents in large urban systems, as well as state superintendents in four of the most reform-oriented states (Delaware, Rhode Island, Louisiana, and New Jersey). Broad graduates are in the number one or number two seats in the three largest districts in the country (New York City, Los Angeles, and Chicago), and lead the newest turnaround systems in Michigan and Tennessee.

James Horn, an associate professor of education policy at Cambridge College in Massachusetts, told Education Week that school officials trained by the Broad program graduate with a hostility to teachers. The same article noted, "A press release announcing the program suggested it was a negative that the vast majority of superintendents were trained as teachers."

Educator Anthony Cody, a member of the public school advocacy group Network for Public Education, suggests that this anti-teacher agenda undermines other goals like improving education regardless of race and poverty. He wrote in Living in Dialogue in 2016, "Even as the Billionaires Boys Club proclaims that their goal is a 21st century civil rights crusade, they impose a brutal policy where the highest-challenge students are crammed into the schools that were already the most segregated, under-resourced and low-performing. In other words, they sabotage the highest-challenge neighborhood schools in order to discredit educators in them who seek win-win school improvement policies."

In response to the resignation of Broad-trained Los Angeles superintendent John E. Deasy in 2014, UCLA education professor Gary Orfield, co-director of the Civil Rights Project, told the New York Times, "We have to be sensitive to teachers, and they have to be involved if these reforms are ever going to actually work."

Many charter schools don't outperform regular schools, according to Network for Public Education -- especially for-profit, new, and independent charters, according to Stanford's CREDO research group. The most problematic charter schools increase segregation, siphon away public money, and all too often spend it illegally, according to a series of reports by the advocacy group the Center for Popular Democracy.

Yet after twenty years of dubious or often poor results, charters are treated like an innovation and remain the darling of the reform movement. They and the other preferred models of so-called "school choice" -- such as online schools and ever-increasing testing -- can be monetized. The Washington Post noted recently, "Entrepreneurs recognized early on that market-based ed-reforms could be a source of substantial profits. Private operators quickly found ways to tap into the vast public resources -- now more than $600 billion a year -- spent on K-12 education."

Broad successfully installed Austin Beutner (who has close ties to Broad himself, but has not attended Broad Academy) as superintendent of Los Angeles public schools in 2017, part of its plan to make Los Angeles half charter school by 2023. It has engaged in similar battles in places ranging from Detroit to Seattle to Louisiana. To inform those considering products of the Broad pipeline in the future, the Center for Media and Democracy has examined the résumés of several of its graduates:

Lumping the Koch Bros and Eli Broad in the same category shows how confused the thinking on public schools has become. Koch supports the far right, Broad supports mainstream Democrats. Look at their contributions for 2016. Broad supports charters because our public schools have failed and continue to fail. Charter schools, to Broad and many others on the Left and the Right, are the only hope. Pressed, I'm sure, they will admit that it is an act of desperation, but we have to try something. I would much prefer to have a vibrant, centrally organized and union organized school system than a bunch of independent charters (schools or mini-districts), but deluding ourselves that evil people are trying to take us over won't help. It's the parents of LA who are insisting that things improve. We haven't completely lost them (as the strike showed), but the burden is on us to improve instruction. Blaming others just makes our demise more inevitable.
Privatization supporters like Mr. Broad may align with a political party but it is simply to further their agenda. It is not traditional public schools that are failing, it is charter schools that have failed to show any difference overall in academic performance compared to traditional public schools. Many charter schools that do perform well often play the system that has been rigged in their favor through political campaign contributions to both parties. These profiteers then use public affairs companies to draft bills that create special laws for charter schools that provide opportunities to defraud public education of our tax revenue through Charter Management Organizations (CMO) which are privately held and outside public scrutiny or accountability. Charter schools were designed to be a vehicle for the wealthy to gain access to revenue streams intended for educating our children and they have been outrageously successful in doing that, to the tune of roughly 2 billion dollars.
Read this article of you want to educate yourself. This shows that Eli Broad is in fact the enemy pillaging the public coffers creating a much worse off school district. I understand your perspective and for the longest time I completely believed it, but after "looking under the skirt" that situation that the Oakland school district specifically is a direct result of Eli Broad meddling in the district itself. https://www.blackagendareport.com/privatizing-oakland-schools