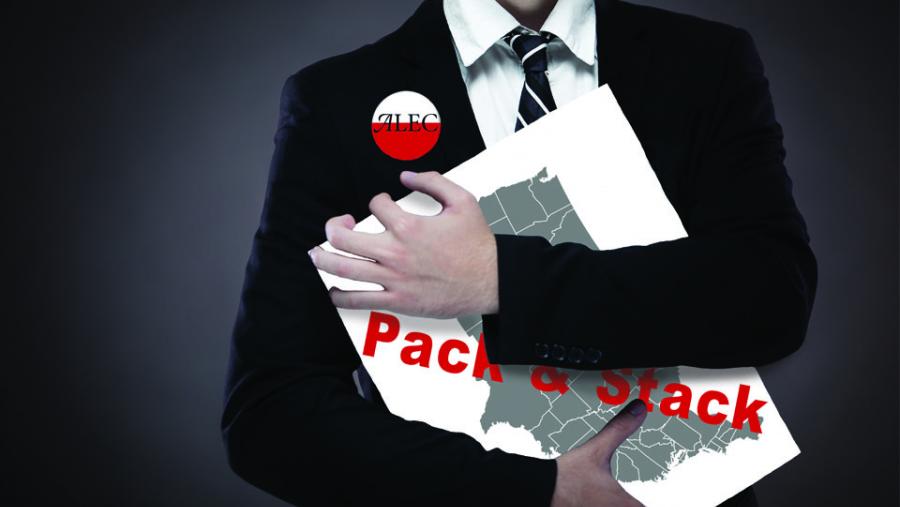 A conservative, industry-backed organization is pushing a proposal to ensure that issues involving redistricting are decided by state legislatures rather than by the judiciary.

The draft resolution argues that intervention by state supreme courts to redistrict congressional maps "violates the fundamental rights" of residents of that state who have elected lawmakers to make such a decision.

"The courts should refrain from judicial overreach in the form of imposing redistricting schemes which have the effect of subverting the republican process intended by America's Founding Fathers," an ALEC summary of the draft resolution says.

Efforts to reach representatives for ALEC to discuss the draft proposal were unsuccessful. The non-profit, which until recently focused on state-level issues, has increasingly delved into national issues as former ALEC members, including Vice President Mike Pence, take high-ranking positions in the Trump administration and Congress.

The draft resolution by ALEC is part of an "increasing number of efforts to undermine the role of the judiciary," Michael Li, the senior redistricting counsel at the Brennan Center for Justice, told Sludge.

The Brennan Center estimates that there are at least 51 bills in 16 states that seek to diminish the independence of the judicial branch either by changing how judges are selected, scaling back resources available to the judiciary, implementing disciplinary action or restricting the courts' power to find legislative acts unconstitutional.

Unlike the courts, legislatures can be lobbied by industry officials and therefore influenced, which is why redistricting decisions should be left to the courts, Li argued.

"It's important to have a check and balance in the process because state legislatures often are prone to be captured by special interests, especially when it comes to something like redistricting that your average member doesn't understand and maybe never has done before -- since it takes place only once every 10 years," Li said. "In many places, it is leadership who, along with consultants and operatives -- often from out of state -- make the real decisions. And their goal is invariably to maximize power above all else."

The draft resolution by ALEC -- which has been behind major laws like Stand Your Ground -- also comes as several states consider independent redistricting measures on their ballots and courts around the country consider cases involving redistricting issues.

In North Carolina, voters will decide in November whether to amend the state constitution to give the Legislature more control over appointing judges. Currently, it's up to the governor to fill judicial vacancies, in which case appointees serve until the next judicial election. But the constitutional amendment pushed by the Republican-controlled Legislature seeks to strip that power from the executive branch and put in place a nine-member commission appointed by the Legislature, the governor and the Supreme Court chief justice to select potential court appointees.

North Carolina Gov. Roy Cooper, a Democrat, has been in a constant state of war with the General Assembly, where Republicans have a supermajority in each chamber, allowing the party to easily pass legislation and override the governor's vetoes.

While the legislation in Pennsylvania stalled, lawmakers in neighboring West Virginia began the process of impeaching the state Supreme Court last week after allegations of lavish spending. But good government groups and Democrats say the lavish spending is the cover story of a more nefarious plot by Republicans to take control of the court.

Colorado, Michigan, Missouri, Ohio and Utah all have ballot measures appearing before voters in November pertaining to redistricting initiatives. President Donald Trump won all of those states, with the exception of Colorado, in 2016.

Efforts to strip power away from the judiciary or influence the makeup of the courts come as the 2020 census and subsequent redistricting loom.

"There are huge battles about representation that are coming up -- who gets to count how states do redistricting...Some states may try and change that," said Li. "There's a lot that's riding on what state courts decide."

This story was produced by Sludge, an investigative journalism website covering money in politics.

ALEC needs NOT to exist anymore. They HATE this country and are worthless.