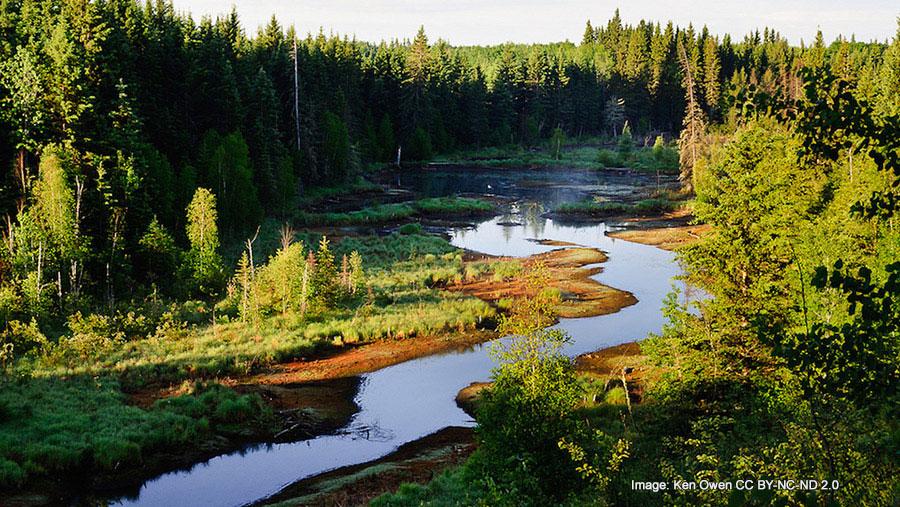 Recently in the National Review, Richard Garneau, the CEO of Resolute Forest Products published a loosely held together set of lies, exaggerations and out-of-context statements about a lawsuit that his company has filed against Greenpeace entities in the United States.

In that piece, he misrepresents Greenpeace communications and legal statements to bolster his unsupportable view that a 46 year old non-profit with a strong record of advocating for the protection of the environment has singled his multi-billion dollar company out and made it a victim.

The truth is much simpler.

Greenpeace, in advocating for the Boreal forest, critiqued Resolute's practices in good faith, and Garneau responded by slamming the organization first with a defamation lawsuit in Canada and then a $300 million Canadian dollar RICO lawsuit in the US.

These types of lawsuits are known as SLAPP suits (Strategic Lawsuit Against Public Participation) and aim to intimidate the organization into silence.Rather than responding to our thorough citations of the opinions of scientists, he would rather put words in our mouth and rebut things that we've never said.

Those are the actions of a bully, not a victim.

Resolute has been, in recent years, lashing out at anyone who criticizes them, including suing their own environmental auditor, the Rainforest Alliance. But Garneau doesn't want you to look at the big picture.

He selects small details from legal statements and uses them out of context, vastly misrepresenting what Greenpeace has said and will continue to say. He harps on our use of the word "destroyer" used on a Greenpeace Canada website, claiming that Resolute can't possibly be a "destroyer" of a forest if it replants trees.

As we have made clear, both outside of court and in our legal pleadings, Resolute's irresponsible practices are permanently altering the resilience of the forest and impairing its ability to support the viability of woodland caribou.

In an affidavit filed on January 23, 2017, Dr. Jay Malcolm, PhD, an independent forestry professor at University of Toronto said:

In my opinion, the Defendant's statements that Resolute is 'destroying' the boreal forest through its boreal logging operations, and in the process is contributing to global climate change, are entirely reasonable. A forest consists of more than its trees. For example, if an original natural forest with its myriad wildlife plant and animal species is replaced by a forest with only a fraction of those species, then it is reasonable to my mind to say that the forest in its original condition has been destroyed."

In his latest argument, Garneau claims that Greenpeace is backing down from our claims by taking out of context legal documents that further explain what we meant by the word "destroy."

At no point have we ever backed down from this statement. In fact, we've committed not to ever be intimidated by this SLAPP suit and to continue to speak the truth about Resolute's unsustainable practices, and even worse, the underhanded tactics Garneau is using to suppress free speech.

The rest of his piece aims to characterize Greenpeace as a profit-hungry company bringing in donations from lies. Greenpeace is and always has been a non-profit, and our employees do their work for love of the planet and people that depend on it.

We have worked with many corporations around the world to set them on a path towards sustainability, and many have expressed their gratitude for the work we have done together.

very pragmatic and practical people, and as long as you are willing to listen, their whole intention is to see a change happen… as long as they see companies making a genuine effort, these guys will bend over backward to help you." "They [Greenpeace] are real subject-matter experts."

Resolute suggests that we're sitting in offices in Washington, DC, and Amsterdam while the logging company is working with local communities.

Instead, our campaigners and researchers have extensively documented, photographed and mapped the forest and worked closely with First Nations in order to better understand the policies that will preserve it.

If all this detail feels exhausting, that is precisely the point. Rather than meet our criticism head on and work with Greenpeace to preserve and protect an ancient and irreplaceable forest, Resolute wants to bog us down in expensive lawsuits and distracting red herrings.

The truth is simple.

We're asking Resolute to do right by the forest and the people and wildlife that depend on it, to honor the rights of First Nations, to make its practices sustainable for future generations, and to do its part in guarding against climate change.

We're willing to sit down with Resolute's executives to make a plan to get there, something which we have consistently asked for in our campaign. We would be happy to champion their progress if they would comply with previous commitments, including gaining Forest Stewardship Council certification on 80% of its lands.

But first it has to drop this expensive, bullying tactic of futile lawsuits that don't help the forest, the local people, or frankly, its own shareholders who will end up paying for this vindictive and misguided strategy.

A World Without Greenpeace? How One Corporation Is Attacking Your Right to Speak for Forests

"We’re willing to sit down with Resolute’s executives to make a plan to get there, something which we have consistently asked for in our campaign." How is pulling out of the Boreal Forest Agreement consistent with this statement? Resolute was at the table with Greenpeace, and Greenpeace left. Greenpeace will sit down with Resolute only so long as it is happy with what Resolute does. When Greenpeace is unhappy with what Resolute does, it leaves the table and launches a war. Looks like it's Greenpeace that wants the war... Good luck with it.
Given Greenpeace's penchant for encouraging its members to break laws across the world, "organised crime" seems a pretty good desctiption. And a lawsuit seems quite a good direct approach. GP running scared again? Good. Take them down.
Terrific idea, Einstein. Let's shoot the lights out of more citizen's groups so that powerful corporations will not be pestered when they exercise their benevolent greed to make us nothing but happy. What a better world it would be! Because, after all, government is looking out for our interests, and those of our children's children. Why should we need citizens to care? Also, while we're at it, let's screw the whales. I've never even seen one.
According to Resolute's own webside, resolutevgreenpeace , Greenpeace's claims are these: "These alleged claims arise from, among other things, Greenpeace’s self-described “Resolute: Forest Destroyer” campaign falsely accusing Resolute of, among other things: (a) “destroying endangered forests,” and “operating and sourcing wood . . . in violation of law”; (b) causing the “destruction of endangered species” and “critical caribou habitat” and risking a “Caribou Herd Death Spiral,” “extirpation” and “extinction;” (c) “abandoning” and “impoverishing” the Boreal’s indigenous communities; and (d) impairing the Boreal’s ability to mitigate climate change." It's really hard to imagine ANY forestry company not guilty of claim (d); "imparing the Boreal's ability to mitigate climate change", even if they conduct forestry with the best of intentions. So Resolute objecting to that claim just makes them come across as incapable at assessing themselves critically.