Pope Francis Should Answer to ExxonMobil rather than God, Imply Climate Deniers 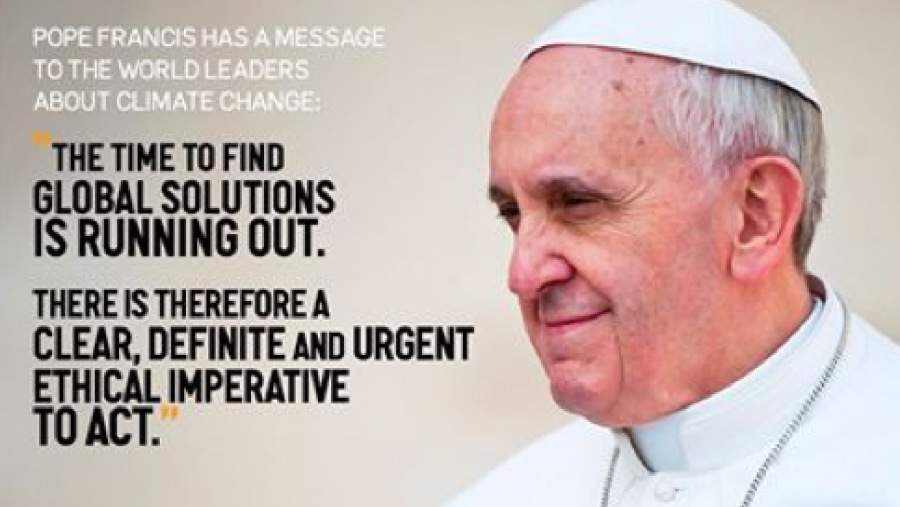 By Brendan Montague and Kyla Mandel in Vatican City. First posted at DesmogUK

The clowns of the climate denial travelling circus pitched their tent in Vatican City today to demand Pope Francis ignore the dangers of global warming.

The increasingly eccentric Lord Monckton played ringmaster to Dr. Calvin Beisner of the Cornwall Alliance and Marc Morano from CFACT in a curious performance hosted by the Heartland Institute.

These groups have all been funded by "dark money" from the secretive DonorsTrust and Donors Capital Fund, which have in turn been funded by the oil billionaire Koch brothers.

The circus has arrived to catch a free media ride on the official delegation meeting the head of the Catholic Church at the Vatican, including Ban Ki Moon from the United Nations and the economist Jeff Sachs.

Monckton made an extraordinary speech in which he warned the pope against making a statement against climate change by citing the persecution of Galileo and "murder" of Giordano Bruno by the church.
"That decision to enter into the realm of science resonates and does harm to Holy Mother Church to this day," he argued. "So your Highness - do not do this again."

"Some 'me too' statement from someone who is not a physicist but a chemist is not likely to carry very much weight in the councils of the world. The damage that would be done by a statement straying into the science of this question—on either side—would be to the church herself. For yet again, she would have gone beyond what she was founded to do… and yet again got the science 100 percent plumb wrong."

Lord Monckton instructed the pope not to issue a statement on climate change: "You will be kicking the poor in the teeth. Stand back, listen to both sides, and do not take sides in politics.

"For you not only demean yourself in so doing but you demean the office that you hold and you demean the church who it is your sworn duty to protect and defend and advance. God bless you, Your Holiness. We pray that wiser counsels to those you have so far been listening will prevail. And you will stand back from intervening."

Monckton, when questioned by one of the nine journalists in attendance, made an unsubstantiated claim that he had already met privately with Vatican officials and was privy to their thinking on climate change.

Just nine journalists made up the audience at Heartland's press conference. Photo by Brendan Montague

Monckton has previously attacked a climate change policy advisor and a young Jewish student as Nazis and used a swastika in a presentation to illustrate his point. He has also claimed only religious people, and preferably Christians, should conduct climate research.

The one-time junior Tory party advisor attended the Conference of the Parties climate talks in Doha paid for by the Committee for a Constructive Tomorrow (CFACT), only to be permanently banned for impersonating an official UN delegate.

Climate Depot is a project of CFACT, which has received more than $4.1 million in funds from DonorsTrust and the Donors Capital Fund in the decade leading up to 2011 and a further $582,000 directly from ExxonMobil during a similar period.

Beisner, who has a Phd in Scottish history, fears environmentalists are "the greatest threat to Western civilisation" as it unites "the utopian vision of Marxism, the scientific facade of secular humanism, and the religious fanaticism of jihad."

He is the founder and spokesman for the Cornwall Alliance, a project of the James Partnership. The partnership received more than half of its $340,000 in funding from DonorsTrust, which in turn has benefited from the generosity of the Kochs.

More information about the deniers' travelling circus can be found in these background briefing papers prepared for journalists by DeSmogBlog and DeSmog UK.

Brendan Montague is the Editor and Kyla Mandel is the Deputy Editor of DeSmog UK.

As Pope, I believe it should be his concern how we treat and protect all God's creations, not the one's man created. If it's political it certainly isn't because the Holy Father made it so.
Look Up being your chemtrailed!