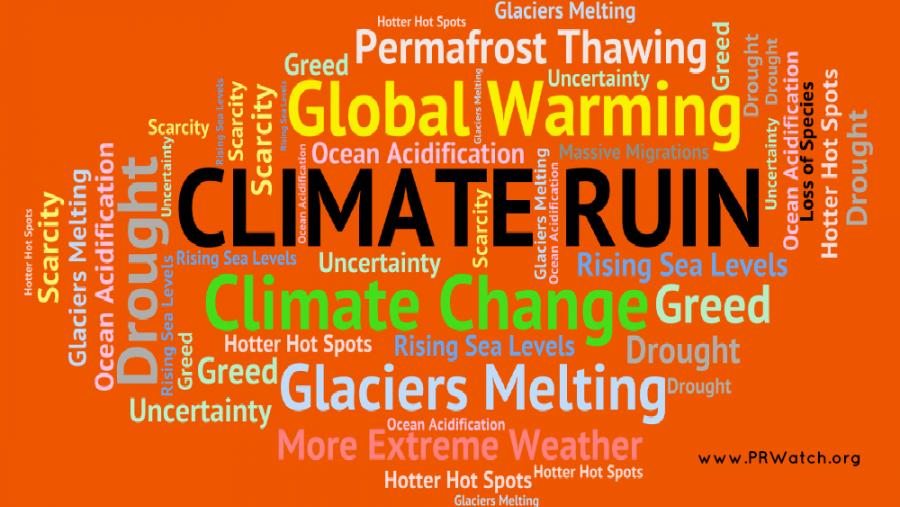 What's in a name? Does the phrase "climate change" adequately convey the devastating consequences of human-caused changes to our planet's climate? This guest op-ed argues that it does not and that people concerned about the changes underway need to make clear that they are not "beneficial," as claimed for more than a decade by the American Legislative Exchange Council and the experts it uses to urge lawmakers to block environmental protections, but that these changes are disastrous or ruinous.

"I thought I liked that the USA is now number one in oil and gas, but hey, I don't want to ruin the climate...."

That's the reaction we will get when we rebrand from "Global Warming" and "Climate Change" to "Climate Ruin."

"Global Warming" sounds like a nice respite on a cold winter's evening.

"Climate Change" is the lukewarm term that rightwing spin maestro Frank Luntz understood would water down concerns about the warming of the planet, as first exposed by Oliver Burkeman in the Guardian,  and Luntz succeeded in making it stick.

It's about time we return the favor.

We need WWII-scale actions to transform our energy systems because energy "business as usual" will destroy our society.

The terms "Climate Change" or "Global Warming," or even "Climate Crisis" or "Climate Disruption" do not conjure the urgency to get up and go do something about it.

The term "Climate Ruin" is much closer to the truth, and much more effective.

A journalist writing an article about America producing more oil and gas than Saudi Arabia might mention that all this new gas and oil will guarantee more "Climate Change," but its easy to shrug that off.

However, if that article mentions that burning all that new American gas and oil guarantees "Climate Ruin," that can't just be swept under the rug, because people will fight to avoid a future where they are forced to abandon their homes and find a new place to try to survive.

A guarantee of a change, warming, or crisis has very little impact on people, but guaranteeing a ruined world will not be accepted.

The media repeating "Climate Ruin," as much as they now repeat "Climate Change" and "Global Warming," will lead to action.

It is sad but true that continuing on our current path with business conducted as usual will ruin the lives of your kids because their climate will be ruined. That message has the kind of impact we need to win this fight.

34 years of science being 97% certain is NOT "certainty" after 34 years of failure at achieving the climate action targets we needed 25 years ago to SAVE THE PLANET.
Afraid the cockroaches will take over? See, the real trick is not rebranding to "climate ruin", it's figuring out what the descriptor should be 3 or 4 iterations from now, because this new attempt at reprogramming, and the ones after that, are going to face-plant like all the previous ones. Especially when the political assassins of the world's poor keep citing that nutty 97% deception.
"Climate Ruin" seems about right for Global Alarmists.
Well, it's about time for a new, more expletive term. GW, GCC no longer inlame the public. Climate disruption just never caught on. Climate ruin - just the next string for "we have a faux crisis going on here".
For those among us so inclined to ever more fanatical terms - might I suggest "CLIMATE APOCALYPSE" as the zombie crowd has already put in the time and effort to credential it. I'm sure you'd find a willing accomplice in (yellow) journalism.
"[P]eople will fight to avoid a future where they are forced to abandon their homes and find a new place to try to survive." When the new major glaciation period happens--not unlikely in our life times--then, yes, many millions of people in the northern hemisphere will have to move south in order to survive. That would include 38 million Canadians, and all of the people in New England and the northern tier states of the U.S. And then there are the Russians. And the thing is, global warming or global cooling, there's not a thing humans can do about it, but I would sure prefer a warm December to a frigid July.
Is Alex Carlin a closet skeptic? As a PR expert, he knows that constant rebranding only serves to increase public skepticism.
Alex you need to get updated. ""Climate Change" is the lukewarm term that rightwing spin maestro Frank Luntz understood would water down concerns about the warming of the planet, as first exposed by Oliver Burkeman in the Guardian, and Luntz succeeded in making it stick." You alarmists keep trying to say that Luntz is responsible for the "watering down concerns" of planet death by changing the alarm from AGW to Climate Change. The only problem with that is Mr. Luntz made that comment two years after the UN IPCC Report, which used that tag through their report. The same IPCC report the Alarmists use as their bible.
Yes Bruce, that is exactly my point, that people on "my side", like the IPCC, are using pathetically weak terms. I never said Luntz coined Climate Change. He noticed "us" using it, and the clever devil promoted it.