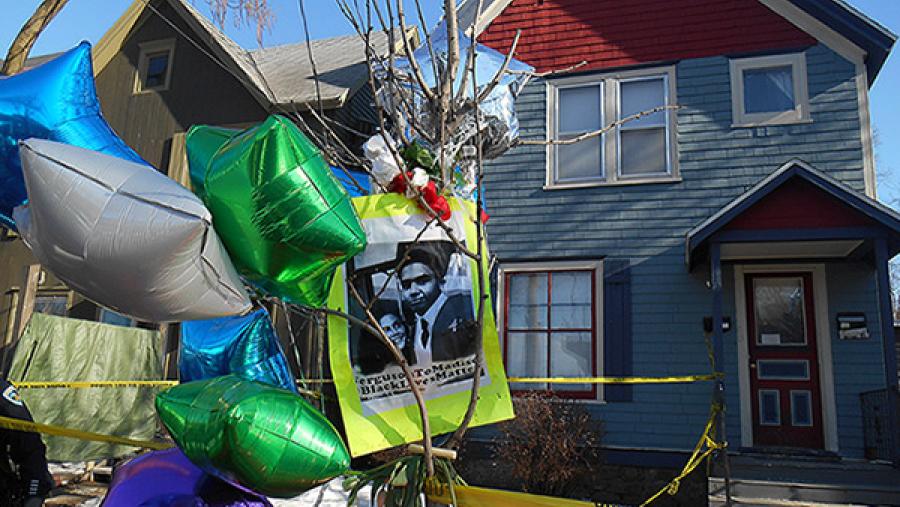 Soon after becoming governor in 2011, Scott Walker eliminated funding for the state's first program to track and remedy Wisconsin's worst-in-the-country rate of racial disparities. The program, aimed at monitoring racial profiling during traffic stops, had only taken effect one month earlier, and Walker declared that the repeal "allows law enforcement agencies to focus on doing their jobs."

Then-State Bar President James C. Boll, Jr., said at the time "[t]he data collection just began this year. At best, to repeal this requirement now would signal that the Legislature has concluded, without any empirical basis, that racial profiling does not exist in Wisconsin or is not a significant problem."

Yet Wisconsin does, in fact, have significant problems. The state has the highest rate of incarceration of black men in the country, and most Wisconsin counties arrest black people at exceptionally high rates--even outpacing the disparities in Ferguson, Missouri.

These issues boiled to the surface this week after a white Madison police officer, Matt Kenny, shot and killed an unarmed 19-year-old black teenager named Tony Robinson on March 6. Hundreds of people have taken to the streets and filled the state capitol, chanting "black lives matter" and mourning Robinson, who recently graduated from a high school in a suburb near Madison and was slated to attend Madison Area Technical College next fall.

"He was a beautiful, beautiful soul, and everyone that knew him knew that," said Robinson's grandmother, Sharon Irwin.

Robinson's shooting will be investigated by the state Department of Justice, under a law spearheaded by state Rep. Chris Taylor that passed last year with bipartisan support requiring outside agencies to investigate officer-involved deaths. Walker's 2016-2017 budget declined to fully fund the program.

On the Surface, Madison an Unlikely Place for "the Next Ferguson"

Madison's Police Chief Mike Koval has not denied the parallels between the death of Tony Robinson in Madison and Mike Brown in Ferguson. “To the extent that you have, again, a person of color, unarmed who subsequently loses his life at the hands of the police, I can’t very well distance myself from that brutal reality,” he said.

Yet at first glance, the state capitol of Madison may seem an unlikely place for "the next Ferguson."

In many U.S. cities there is a 10- to 25- percent disparity between representation of people of color on the police force and in the community. (In Ferguson, just 3 of the 53 officers were African-American in a community that is 60 percent black.) In Madison, in contrast, around 18 percent of the department's officers are people of color, nearly matching the 22 percent in the city. Officers have reportedly received training in unconscious racial bias for over six years, well before the issue reached a fever pitch in the national conversation after Ferguson, and the department has long claimed to prioritize efforts to address racial disparities.

Madison is an unabashedly liberal city, even among the police force. In 2011, many Madison police officers marched against Governor Walker's anti-union Act 10 legislation, even though their unions were exempted from the law. And when the U.S. Supreme Court OK'd same-sex marriages in Wisconsin last October, three Madison police officers took it upon themselves to bring wedding cake to the newlyweds celebrating outside the City-County building in Madison.

A photo of the three officers carrying the wedding cake went viral; the officer who came up with the idea to buy the cake, and who was in the center of the picture, is Matt Kenny.

Yet despite Madison's egalitarian ideals, it is a highly segregated city that has a complicated relationship with race, and the outpouring of anguish and frustration after Robinson's death laid bare the often-neglected racial tensions in the city.

“Here in our little bubble of Madison, Wisconsin," Robinson's aunt, Lorien Carter, said during a protest after her nephew's shooting, "I want y’all to know, that for minorities, we are [in one of] the top five worst places to live. But we are [also in one of the] three happiest cities to be in. So who is it happy for?”

"Madison thinks of itself as a great place to live, but this isn't the case for many people of color," said Leland Pan, a member of the Dane County Board of Supervisors.

Madison's overall demographics do not reflect that the city's minority populations reside largely in disinvested communities on the north and south side. Over 54 percent of Dane County's African-American residents live below the poverty line, compared to just 8.7 percent of whites. Madison's upper-middle-class downtown and campus areas--with the lakes, running trails, farmer's markets, and craft beer bars that put Madison among the top rankings for best U.S. cities--are overwhelmingly white, and are often not very inclusive.

Madison's racial dynamics are reflected in criminal justice statistics. Police in Madison arrest African-Americans at a rate more than nine times higher than members of other racial or ethnic groups. At least 80 percent of young people in juvenile detention facilities in Madison were African-American, as of 2013. And according to a 2007 Justice Policy Institute report, a black resident of Dane County was more than 97 times more likely to go to jail for a drug crime than a white resident.

Ferguson Said "Enough," Madison Can Too

In recent months, community groups and members of the Dane County Board had been advocating against a proposal to construct a new $150 million jail in Dane County, which many believe could have the effect of perpetuating the county's racial disparities. Rather than spending $150 million on building a jail, Dane County could direct those resources toward incarceration alternatives and greater investment in Madison's communities of color. Although the Dane County Board blocked the jail plan after public protests, activists Z Haukeness and Karma Chavez noted that "there has been less attention paid than one might imagine to the proposal" among the community-at-large.

Even as Madisonians expressed outrage at the police killings of Mike Brown in Ferguson, Eric Garner in New York, and Dontre Hamilton in Milwaukee, there was little urgency in addressing the city's own problems with race and criminal justice. Now, after the killing of Tony Robinson, Madison's problems can no longer be ignored.

"This should eviscerate the last shred of the myth that things that happened in Ferguson can't happen in Madison," Pan said. "This is one of the core issues Madison needs to tackle."

“We know Ferguson because that community said ‘enough,’” activist M Adams told the Capital Times. “That's what we have to do here.”