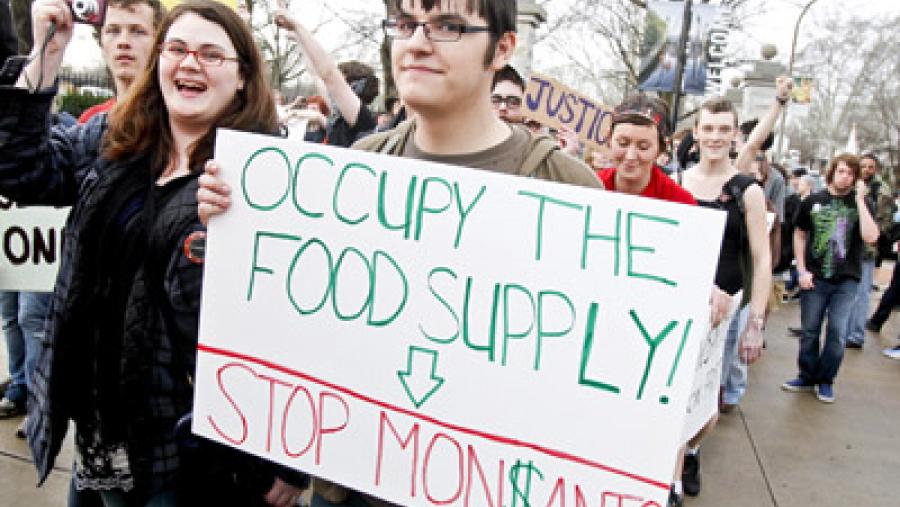 Residents of Maui County, Hawai'i voted on November 4 to ban the growing of genetically modified (GMO) crops on the islands of Maui, Lanai, and Molokai until scientific studies are conducted on their safety and benefits. Monsanto and Dow Chemical's unit Mycogen Seeds have sued the county in federal court to stop the law passed by the people.

In Vermont, the Grocery Manufacturers Association (GMA, of which Monsanto and Dow were recently listed as members) has sued the state over its law requiring GMO labels. And Monsanto has a history of suing to prevent consumer labeling regarding its products. The company sued a number of dairies in the 1990s and 2000s for labeling milk free from recombinant bovine growth hormone (rBGH), which Monsanto developed and marketed as Posilac® (sold to Eli Lilly in 2008), the only commercially approved form. Vermont itself is no stranger to such suits. The International Dairy Foods Association sued Vermont for passing a law requiring labeling of milk containing rBGH (Monsanto wrote an amicus brief in support of the plaintiff, and GMA was a plaintiff-appellant) -- and it won in federal court.

On the same day that Monsanto said it would challenge the decision of Maui's citizens to regulate their own land and environment in court, the company also launched a new national advertising campaign as part of an effort to improve the image of the widely reviled company.

The glossy ads portray families of many cultures sitting down to eat gorgeous foods, invoking images more often seen in the pages of Saveur than in the hallways of one of the world's largest chemical companies.

The website invites questions from the public. The vast majority are skeptical, if not hostile. Others sound like they were written by Monsanto staff. Predictably, some of the hardest questions, like the one posed by Tim H., "In 2013, how much money has Monsanto spent on lobbyists in DC? What laws were these lobbyists attempting to create/amend and why?" are given short shrift.

Monsanto's pretty TV ads target moms and millenials, according to the company's corporate brand lead, Jessica Simmons. Monsanto has even hired a new "director of millenial engagement," Vance Crowe, 32. He represented the company at a recent South by Southwest Eco conference in Austin, where revelations that Monsanto had paid for a panel of farmers to attend and present generated some excitement, as Tom Philpott reports in Mother Jones.

Crowe told NPR's "The Salt" blog, "[T]he challenge with something like SXSW Eco is that it doesn't do anybody any good if people are so passionate that they're yelling. The challenge is how can we enter the conversation so that people don't feel like they have to yell to be heard?" Apparently, Crowe hopes to "enter the conversation" one party at a time. He enthusiastically describes how he and a gay colleague attended sessions on "sustainable fashion" and got invited to parties where they won fans and accolades.

Coincidentally, the front page of Discover.Monsanto.com contains, under "Here's where we work," a picture of corn crops being tended in Maui, with the text, "Hawaii’s unique climate allows for three to four growing seasons a year, reducing the time it takes us to develop new products. Our island roots go back more than 45 years."

The marketing text may indicate the issue at the heart of Monsanto's lawsuit against Maui. Those multiple growing seasons mean that "about 90 percent of all corn grown in the U.S. is genetically engineered and has been developed partially at Hawaii farms," according to the Associated Press. Monsanto and the rest of the seed crop industry reap $146.3 million a year in sales from their activities in the state, according to a 2009 USDA report. Now Monsanto would have to substantially downsize its activity in Maui County in order to follow the new law, according to its lawsuit.

Monsanto's new PR campaign seeks to make its brand approachable to the American consumer. Yet, with 92 percent of Americans demanding that GMO foods be labelled, according to a new Consumer Reports poll, Monsanto and its new millenial hires have their work cut out for them.

Consumer Reports recently put out a study on where GMOs are hiding in your food, including in packages labeled "natural." You can access the report here.