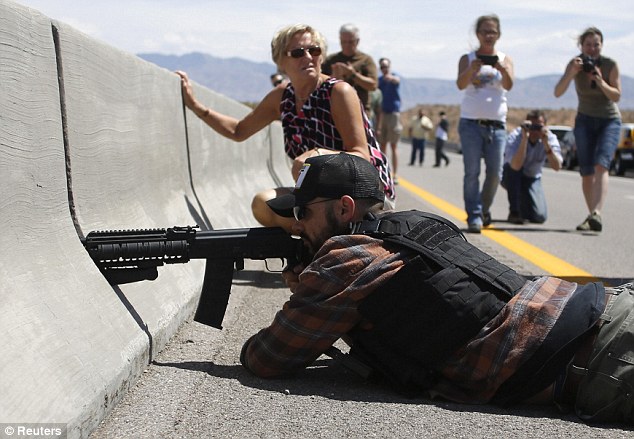 Amidst a new "Sagebrush Rebellion" ignited by a Nevada rancher and his armed supporters that threatened to turn violent, Congressman Raúl Grijalva has asked the U.S. Department of the Interior to "investigate the role of the American Legislative Exchange Council (ALEC) in efforts to pass bills at the state level" that undermine federal authority over state lands and thwart the agency's duties.

"ALEC's pattern of activity raises serious questions about how changes to land management laws and regulations, especially in the Western United States, are being pushed by ALEC without public disclosure of its role or that of the corporations that fund its legislative agenda," Grijalva wrote in an April 16 letter to the Acting Inspector General of the Department of Interior.

For decades, ALEC has pushed legislation to transfer public lands and national forests to state control -- likely for the purposes of oil, gas, and coal extraction, which would benefit ALEC members like Peabody Energy, Duke Energy, American Electric Power, and others.

For decades, it has pushed "model" legislation like the "Sagebrush Rebellion Act" for states to introduce and adopt to seize control of federal lands. As far back as 1978, ALEC was boasting of its role in helping spur the Sagebrush Rebellion (as well as its "victory" in pushing mandatory minimum sentencing), and included Sagebrush Rebellion legislation in its 1980 "Energy for the Eighties" briefing book, which was developed thanks to "ALEC's fine working relationship with the American Petroleum Institute."

ALEC has adopted at least nine bills asserting state control over federal lands. In 2013, for example, it adopted a "Resolution Demanding that Congress Convey Title of Federal Public Lands to the States," which argues that "because of the inordinate buildup of fuel in the national forests due to decades of unduly restrictive federal 'preservationist' policies . . . Al Qaeda is actively publishing in their 'Inspire' terrorism magazine of the opportunity to burn down our national forests."

"In 2014, expect more states to press this issue both in the East and the West as state legislators are likely to continue to work together through ALEC and other organizations in order to gain back their land," Wynn wrote.

Rep. Grijalva: "The consequences of ALEC's positions are severe and deserving of careful scrutiny"

The issue of federal control of Western lands was thrust into the spotlight in recent weeks after Nevada rancher Cliven Bundy, who had refused to pay grazing fees for 20 years, risked having his cattle confiscated by the federal Bureau of Land Management (BLM). Bundy, who says his ownership rights go back to his 1870 Mormon ancestors and says he believes in a “sovereign state of Nevada” but doesn't "recognize the United States government as even existing," likewise had refused to recognize the authority of the BLM.

As the feds began to round-up Bundy's cattle, hundreds of state's rights protesters and armed militiamen prompted a string of raucous confrontations. Over the weekend, the BLM halted the roundup "because of our serious concerns about the safety of employees and members of the public," said BLM chief Neil Kornze.

"The consequences of ALEC's positions are severe and deserving of careful scrutiny," Rep. Grijalva wrote in his letter to the Department of the Interior. "They are entirely consistent with the position taken by anti-government rancher Cliven Bundy and his armed supporters," who refuse to recognize federal authority over public lands.

Last year, Bundy spoke before a Nevada legislative committee in support of AB 227, an ALEC-backed bill to transfer federal land to state control.

"The ALEC vision of state sovereignty trumping long-standing federal government efforts to manage public lands has already had tangible effects on Bureau of Land Management and other agency employees' efforts to do their jobs," Grijalva wrote.

The Arizona Congressman also noted that for years, “Despite actively pressing state lawmakers on a range of issues, ALEC has failed for decades to register as a lobbying organization in states where it has promoted changes to state laws.” ALEC's 501(c)(3) status has been challenged on grounds that it engages in excessive lobbying in IRS complaints filed by Common Cause, CMD, Clergy Voice, and the Voters Legislative Transparency Project; in response, ALEC formed the 501(c)(4) "Jeffersonian Project" to avoid any adverse IRS action.

Rep. Grijalva asked that the Interior Department "liase with the IRS to determine whether ALEC activities violate federal, state or local lobbying and disclosure regulations."

Since the 1970s, ALEC has taken credit for helping to advance the Sagebrush Rebellion, as CMD has helped document.

In 1995, ALEC corporations and politicians on its task force voted to make its "Sagebrush Rebellion Act" a national “model” to be introduced in states across the country. Its board endorsed that bill.

In 1996, after then-President Bill Clinton designated 1.8 million acres of land as the Grand Staircase-Escalante National Monument, ALEC corporations and politicians passed a resolution declaring that Clinton "failed to adequately consider the environmental implications of national monument designation" since "given the vast reserves of clean-burning coal available, it is not environmentally nor economically sound to continue to 'waste' clean-burning coal reserves." Its board approved that resolution.

In 2000, ALEC corporations and politicians voted for a "Resolution on Local Jurisdiction Consent of National Monument Designation" declaring that "the Legislature of the State of _____ . . . denounces the designation of national monuments in the State of ______ without full public participation, consent and approval" of local and state government. ALEC’s board approved that resolution.

In 2005, ALEC corporations and politicians voted for the "Public Lands Policy Coordination Act" and "State Standards for Federal Resource Management Act" -- based off of legislation in Utah -- to create a state-level public lands office. Its board approved that bill as a national model for other states.

In 2010, ALEC corporations and politicians voted to adopt the "Eminent Domain Authority for Federal Lands Act," which asserted a state's right to appropriate federal land -- and which almost certainly would be unconstitutional. ALEC’s board ratified that bill as a national model to be introduced in other states.

In 2011, ALEC corporations and politicians voted for a "Resolution Requesting that the Federal Government Confer and Consult with the States on Management of Public Lands and Energy Resources," declaring that "public lands should be managed to encourage environmentally responsible energy development," and calling "on Congress and the Administration to commit to greater consultation with the states." That resolution was approved by ALEC’s board.

In 2012, ALEC corporations and politicians voted for the "Disposal and Taxation of Public Lands Act," an updated version of the "Sagebrush Rebellion Act" modeled after a Utah law from 2012. A state passing the bill would assert control over federal lands being protected as wilderness preserves, in many cases to allow for resource extraction. That bill was approved by ALEC’s board as part of its national legislative agenda. At least seven states have considered or passed similar legislation.

In 2013, ALEC adopted a "Resolution Demanding that Congress Convey Title of Federal Public Lands to the States." ALEC’s board ratified that as an articulation of its national agenda. One of ALEC's arguments in favor of this resolution, in its own words, was the following:

"Because of the inordinate buildup of fuel in the national forests due to decades of unduly restrictive federal 'preservationist' policies, the FBI and Department of Homeland Security have recently issued criminal activity alerts warning that Al Qaeda is actively publishing in their 'Inspire' terrorism magazine of the opportunity to burn down our national forests — causing billions of dollars in damage and destroying our watersheds for decades — with only a few matches."

In other words, we need to transfer public lands to state control because there are too many trees in national forests, and Al Qaeda might come burn them down.