According to a new report, CEOs at the forefront of the drive to "fix the debt" by slashing Social Security and Medicare, possess personal retirement funds worth an average of $14.5 million, and three have retirement nest eggs worth more than $100 million. The average Social Security check is $1,308 per month. 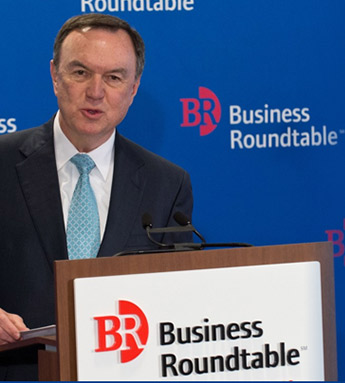 "The loudest calls for cutting Grandma's benefits are coming from CEOs who will never have to worry about their own retirement security," said Sarah Anderson, one of the authors of the report and the Institute for Policy Studies Global Economy Director.

While CMD has spent a lot of time reporting on the spin coming from the Pete Peterson's Fix the Debt gang, Fix the Debt has worked hard at keeping its policy recommendation relatively vague allowing them to deny specific cuts and proposals to change Social Security.

Not so for the Business Roundtable, which has been upfront with "reform" proposals like their initiative to raise the Social Security retirement age to 70. That's not such a bad deal if you have a dozen secretaries and $100 million tucked away, but what if you work on your feet 10 hours a day?

"If leading CEOs really wanted to help American seniors, they'd stop calling for cuts and start leading the charge to lift the cap on Social Security taxes, so that they and other prosperous Americans could help ensure the program's ongoing success," said Scott Klinger of the Center for Effective Government, another author of the report.

One of the most simple and popular reform proposals to extend the long term solvency of Social Security is simply to lift the $100,000 cap on taxable income to $250,000. But that idea is not embraced by the CEOs of Fix the Debt or the Business Roundtable, who want average Americans to bear the brunt of their debt reduction strategy.

* A retirement fund of $14.5 million, combined with Social Security, would generate a monthly retirement check for these CEOs of $88,576. That's 68 times what a typical U.S. retiree can expect to receive.

* Ten Roundtable CEOs (including four who are also Fix the Debt members) have retirement plans valued at more than $50 million.

* Three of these CEOs have retirement assets of more than $100 million: John Hammergren of McKesson, David Cote of Honeywell, and Mike Duke of Walmart.

* While gilding their own pensions, many Roundtable CEOs have underfunded their worker pension funds. Ten of their companies have deficits in these funds of between $4.9 billion and $22.6 billion.

* The Roundtable CEO with the largest deficit in his company's worker pension fund is Jeffrey Immelt of General Electric, with a shortfall of $22 billion.

Read more about the CEO effort to balance the budget on the backs of working Americans at our SourceWatch page on Fix the Debt.

Nucking futs!
It never fails to amaze me, that those who GET their money the EASIEST, such as trustafarians, union workers, government workers (yeah, probably a repeat of the previous entity), and real estate "developers",to name a few, are SO UNDESERVEDLY SMUG about their wealth, as if it were some "natural order" that had elevated them above their fellows. This group also includes Congressmen, politicians of any kind and a host of other leeches, ALL of whom are SO STINGY, they tip like John D Rockefeller (reputedly NEVER gave MORE than one thin dime), and LOVE telling people "if you WORK hard, and MANAGE your money, you TOO can become wealthy!: HAH! ONLY the LUCKY get rich!! It has SO LITTLE to do with TALENT, SKILL, work-ethic, or ANY other thing that PURE LUCK, it's NOT funny! It's an AXIOM that some people can FALL INTO A CESSPOOL, and come out holding FISTS FULL OF $100 BILLS! That is PURE LUCK, in its extreme, but extremely accurate, form! Sadly, the FORTUNE these nitwits ENJOY makes them STUPID, and allows them to BELIEVE it happened BECAUSE they were "so talented, industrious, well-informed, on-the-ball, etc" that the result was INEVITABLE! NOTHING could be FURTHER from the TRUTH! While there IS "some" element of personal involvement affecting the outcome. it has FAR MORE to do with each person's PERSONAL" line in the sand" as to MORALS, HONESTY and HUMILITY, than it does with their "efforts"! It's time to START acting on this, and REFUSING to accept the MYTH of "personal importance" these half-witted slaggards have FOISTED on the rest of us, to perpetuate their evil scheme!
yea union workers get their money so easily what an ignorant statement..
What these greedy SOB'S are saying to working Americans is " we've got our FU money so FU!!!!!!!
I would like to ask a very simple question..... How many of these "CEO's" represent company's who are members of ALEC and are forwarding the political agenda of ALEC? Many of the companies that altered employee hours and eliminated healthcare options for them were also ALEC members, but somehow, that never makes the news.