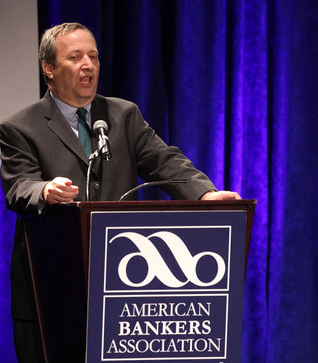 Opposition is growing to the idea of President Obama naming Larry Summers to head the Federal Reserve. As William Greider wrote in The Nation, "Summers is a toxic retread from the old boys' network and a nettlesome egotist who offended just about everyone during his previous tours in government. More to the point, Summers was a central player in the grave governing errors that led to the financial collapse and a ruined economy."

Summers is so cocksure and callous he once suggested using "underpopulated countries in Africa" as toxic waste dumps.

Now he is on Obama's short list for replacing Ben Bernanke as chairman of the Fed's governing board. Bernanke was chosen by President George W. Bush in 2006 after the retirement of President Ronald Reagan's choice, Alan Greenspan. In recent years, Greenspan has acknowledged that he failed to properly assess the Wall Street practices that crashed the economy in 2008 and has endorsed more regulation of the big banks.

Summers, however, has failed to acknowledge his own significant contributions to the financial crisis.

When he served as the Secretary of the Treasury under President Bill Clinton, Summers pushed to repeal Glass-Steagall, unleashing monster "too big to fail" banks and putting taxpayers on the hook for their reckless gambling. He famously opposed CFCT Chair Brooksley Born's efforts to regulate the growing derivatives market. Even Clinton has admitted that wasn't the smartest move.

Insiders in DC have nodded to a "whisper campaign" against the elevation of the Fed's Vice-Chairman Janet Yellen. She would be the first woman to serve as Chairman, if she were nominated and confirmed.

Some allies of Summers have been busy damning Yellen with the faint praise of being knowledgeable about monetary policy but not "aggressively brilliant." Meanwhile, Summers is often referred to as brilliant, despite the numerous severe failures in judgment he has racked up over the years, including a record of what many consider to be sexism.

Sound familiar? Apparently Summers' friends referred to by the New York Times as the "Rubin boys" also think that women innately lack men's "aptitude" at math and sciences. This famous remark by Summers helped spark a "no confidence" vote and censure by the faculty while he was President of Harvard.

But when he helped Harvard rack up some $2 billion in investment fund losses, the university was forced to act. Moreover, as detailed in the Naked Capitalism: "the scandal that led to his ouster at Harvard, was NOT the 'women suck at elite math and sciences' remarks. The university has conveniently let that be assumed to be the proximate cause."

"In fact, it was Summers' long-standing relationship with and protection of Andrei Schleifer, a Harvard economics professor, who was at the heart of a corruption scandal where he used his influential role on a Harvard contract advising on Russian privatization to enrich himself and his wife, his chief lieutenant Jonathan Hay, and other cronies." 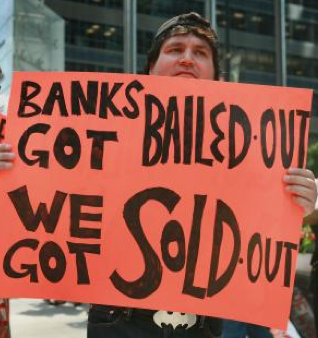 After Summers resigned the Harvard presidency, he took a "part-time" post making $5 million for a little more than a year at a hedge fund, plus nearly $3 million in speaker fees from corporations. He also opposed caps on executive pay at firms receiving federal stimulus money, after accepting free flights on luxury corporate jets from Citibank.

And, as if all that were not damning enough, Summers considers the late free market fundamentalist Milton Friedman his mentor, proclaiming "we are all now Friedmanites." Friedman is considered the economic architect of policies that are basically capitalism unrestrained and his legacy includes a determination to destroy the public school system in America by privatizing it. That's one of the reasons why a number of right-wing legislators from the American Legislative Exchange Council (ALEC) -- a group so captured by corporations that legislators vote as equals with lobbyists on model bills -- were overheard chanting "Milton Friedman, Milton Friedman, Kookookachoo!"

The last thing America needs right now is a Friedmanite at the helm of the Fed. Summers would bring more winter in the economy for ordinary Americans while his buddies on Wall Street would get more and more of America's wealth to offshore.

As R.J. Eskow observed, "Democrats would be insane to let the president nominate Larry Summers."

Good video here about the reality of what happens with math models and money. At the end here with the Q and A Cathy talk about working for Mr. Summers... http://ducknetweb.blogspot.com/2013/04/modeling-for-inequality-with.html If you like that video more at the Algo Duping/Attack of the Killer Algorithm page. http://www.ducknet.net/attack-of-the-killer-algorithms/
If the Federal Reserve is privately owned and not ran by the U.S. Government, why is Obama "naming" anyone as chairman?