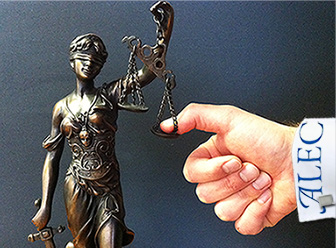 For decades, ALEC has been a conduit for the oil, tobacco, and pharmaceutical industries to push legislation that changes the rules to limit accountability when a corporation's products or actions cause injury or death -- such as when a Koch Industries pipeline explodes and kills teenagers, or when the tobacco or pharmaceutical industries withhold evidence that their products are dangerous. In just the first six months of 2013, seventy-one ALEC bills that advance these "tort reform" goals have been introduced in thirty states (see chart below).

"Each of these bills would weaken the legal rights of everyday people who are wrongfully harmed by a corporation or health care provider," says Joanne Doroshow, Executive Director of the Center for Justice & Democracy, a group that works to protect the civil justice system and fight tort reform. "[The bills] are carefully crafted to provide relief and protections for the industries who wrote them."

A long-standing principle of American law gives a person injured (or whose family member is killed) by the fault of another the right to pursue justice and seek fair compensation in front of a judge and jury. An injury for which a person can sue is known as a "tort." Tort lawsuits are one of the few instances where an average American can stand on equal footing with a global corporation, make their case in front of a citizen jury, and demand justice. On a level playing field, consumers often win -- which is why corporate interests want to rig this centuries-old system to their benefit.

Tort cases are relatively rare -- they make up only six percent of the entire civil court caseload, and are declining -- but they are effective. Tort liability is why U.S. companies have stopped selling dangerous cribs that strangle infants and children's pajamas that catch fire.

The ALEC "tort reform" bills fundamentally alter the tort liability system by making it harder to bring a lawsuit or by limiting a jury's ability to award damages. The bills provide a way for ALEC corporations to escape responsibility for wrongdoing, help ALEC insurance companies limit payouts (and increase profits), and prevent Americans wrongfully injured or killed from receiving just compensation.

Some ALEC bills limit how much a corporation might have to pay for causing injury.

Other ALEC bills change how liability is apportioned when more than one individual or corporation is at fault.

Other ALEC "model legislation" would provide immunity for certain forms of lawsuits.

Others involved with the Civil Justice Task Force include a variety of corporate trade groups that have worked closely with Schwartz and his law firm, such as the U.S. Chamber of Commerce and the National Federation of Independent Business, as well as the American Insurance Industry and others.

"Industries like the tobacco, insurance, oil and chemical industries are pretty detested," Doroshow says, "and trade groups provide a way for these corporations to hide behind a more neutral-sounding entity that will push their agenda. This makes it harder for the public to learn how these detested industries would benefit from tort reform."

ALEC's corporate members are a who's-who of companies that face tort liability. Its corporate board, recently renamed by ALEC as the "Private Enterprise Advisory Board," includes representatives of fossil fuel interests (Koch Industries, Peabody Energy, Exxon Mobil, Energy Future Holdings), the pharmaceutical industry (PhRMA, Pfizer), and big tobacco (Altria, formally known as Phillip Morris). It also includes insurance companies like State Farm, which profits from a rigged tort liability system by paying out less in claims (even while raising premiums).

An increasingly major player in advancing the ALEC tort reform agenda is the U.S. Chamber of Commerce and its Institute for Legal Reform, both of which are members of the ALEC Civil Justice Task Force.

A big priority for the Chamber this year has been legislation narrowing access to the courts for asbestos victims. The ALEC "Asbestos Claims Transparency Act" was first adopted by members of the ALEC Civil Justice Task Force in 2007 and was introduced in four states in 2013, in many cases supported by testimony from Shook Hardy & Bacon attorney Mark Behrens on behalf of the Chamber's Institute for Legal Reform. The effort would benefit corporations like Crown Holdings, a Fortune 500 company with over $8 billion in annual sales that has worked with ALEC for years to legislate its way out of compensating asbestos victims, as well as ALEC member Honeywell International, which has faced significant asbestos liability in recent years.

Asbestos-related diseases kill at least 10,000 Americans every year, in many cases from mesothelioma, an incurable and painful cancer caused by exposure to asbestos. For decades, asbestos was used for insulation and industrial purposes, and the diseases particularly affect veterans, firefighters, construction workers, and individuals who worked in factories with high-heat machinery.

Asbestos company executives knew from at least the 1940s that asbestos was deadly but covered it up for half of a century. For example, an internal memo from a subsidiary of ALEC member Honeywell in 1966 stated, "if you have enjoyed a good life while working with asbestos products why not die from it?" The disease can take between 20 and 50 years to manifest, so individuals exposed decades earlier are only discovering the illness now.

Like the ALEC-supported voter ID laws that spread across the country in recent years, supporters of the Asbestos Claims Transparency Act claim the law is necessary to stop fraud -- despite no persuasive evidence of significant fraud or abuse. The law is couched in terms of "transparency," but is actually designed to save corporations money by delaying justice for asbestos victims and enacting unnecessary procedural hurdles for getting their day in court.

The bill could allow corporations like Crown Holdings or Honeywell to delay a lawsuit until a victim files claims with any other asbestos or personal injury "trust funds," which are accounts set up after a company goes bankrupt to pay claims to injured parties. This requirement, advocates say, is intended to drag out a case until after a sick victim dies -- an especially pointed concern given that asbestos cancer victims usually die within a year after being diagnosed.

In December of 2012, Ohio became the first state to pass the ALEC asbestos bill, which the Chamber publicly applauded: "'As Ohio goes, so goes the nation,' and we hope this will result in a domino effect," said Lisa Rickard, president of the U.S. Chamber's Institute for Legal Reform. The Wall Street Journal editorial board -- which includes Stephen Moore, an ALEC "advisor" -- published an editorial in support of the legislation.

Consumer and worker advocates expect more states to introduce versions of the Asbestos Claims Transparency Act in 2014. A parallel bill has been introduced on the federal level and recently passed the House Judiciary Committee (prompting a response from the New York Times Editorial Board). Testimony presented to Congress from attorneys at Caplin & Drysdale has identified the ALEC connection.

A robust tort liability system advances "free market" goals -- a principle ALEC claims to support -- by providing market pressures that provide a check on corporate misbehavior. The possibility of a lawsuit, and the associated financial liability, provides an economic incentive for manufacturers, hospitals, utility companies, and other corporations to be more safe and responsible, and it advances these goals without government regulation and enforcement.

By pushing these "tort reform" bills, ALEC is not advocating for "free markets" and "limited government," but instead protecting corporate interests from any form of accountability to consumers or the public.

"[The ALEC tort reform bills] offer nothing for consumers and in fact, would do them great harm," Doroshow says. "And they create frameworks, easily amended by future lawmakers, that could result in even worse damage to the public."