WI Republican Insists Romney Would Have Won if Voter ID Law Was in Place, But Admits "Not Dealing With the Real Reality" | PR Watch

WI Republican Insists Romney Would Have Won if Voter ID Law Was in Place, But Admits "Not Dealing With the Real Reality"

Wisconsin State Senator Alberta Darling said that Mitt Romney could have won the state if Wisconsin's voter ID law had been in place for the November 6 election, despite zero evidence of voter fraud -- but also admitted she and other Republicans may not be "dealing with the real reality."

Voter ID "Absolutely" Would Have Made a Difference in Election Outcome 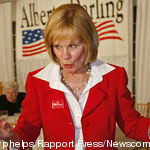 Senator Darling made the comments on the TV show UpFront With Mike Gousha on November 10, in response to a question about whether voter ID would have "made a difference in the outcome" of the election.

"Absolutely. I think so," Darling said. "We're looking at all sorts of different precincts and all sorts of same-day registrations. I know people will go, 'We don't have fraud and abuse in our elections.' But why can't we have voter I.D. when the majority of our people in Wisconsin wanted it? We passed it, the governor signed it. Why should one judge in Dane County be able to hold it up?"

The answer is that as many as 300,000 people in the state do not have the forms of ID required under the law and would have a difficult time getting one, and that extensive investigations by Republicans and Democrats have found that voter fraud is not a problem in the state. Not one, but two, Wisconsin judges have struck down the state's voter ID law as an unconstitutional burden on the right to vote, particularly because on balance, the costs of disenfranchising 300,000 people would not be outweighed by the "benefits" of stopping a problem that does not exist.

Senator Darling's assertions are directly contradicted by overwhelming evidence that voter fraud has never made a difference in the outcome of any Wisconsin election. In July, Dane County Judge David Flanagan struck down Wisconsin's voter ID law as violating the state constitution's express protections for voting rights, noting that:

"Since 2004, voter fraud investigations have been undertaken by the Milwaukee Police Department, by the Mayor of Milwaukee and by the Wisconsin Department of Justice, working with various county prosecutors working through the [Republican] Attorney General's Election Fraud Task Force. None of these efforts have produced a prosecution of a voter fraud violation that would have been prevented by the voter ID requirements" in Wisconsin's voter ID law.

Wisconsin's law, like most of the voter ID legislation introduced in 2011 and 2012, is similar to a "model" voter ID bill from the American Legislative Exchange Council, or ALEC. Darling is an ALEC member and has used taxpayer dollars to pay her ALEC membership dues.

"Maybe we were just not dealing with the real reality"

In recent years, right-wing leaders and media have been hyping unsupported claims of rampant voter fraud and pushing "solutions" to a nonexistent problem that make it harder for many Americans to vote. These "solutions," such as voter ID laws and limits on early voting, tend to disproportionately affect Democratic constituencies like people of color and students -- leading many to infer that, given the absence of real evidence for voting fraud, the laws are a cynical effort to suppress votes for the opposing party. What would be even scarier is if Republicans actually believe that voter fraud is a genuine problem and that these laws are justified, and if they believe GOP mythology surrounding a whole host of other issues, from climate change to an Obama "apology tour" to their own poll numbers.

Shock over the November 6 election results suggests some GOPers really are drinking the Kool Aid. For weeks, the right-wing media echo chamber, with Fox News and its pundits at the center, had been predicting a Romney landslide. Republicans rejected polls showing an Obama lead as "skewed" and attacked pollsters (who would later turn out to be correct) as biased. As Jonathan Bernstein notes at the Washington Post, expressing optimism about polling is to be expected, but the way Republicans treated the polls "might indicate that they really did believe their own nonsense."

In Wisconsin, polls showed President Obama with a healthy lead in the runup to election day. But Sen. Darling still predicted big GOP wins on election night, despite clear evidence to the contrary. After Romney's loss, she said she was "quite stunned at the results." But she had a revelation:

"Maybe we were just not dealing with the real reality."

That assertion is even more true when it comes to voter fraud.

This is precisely what Washington has to deal with and that is people without a firm grip on reality as far as insisting that something be done to advance their own agenda. I just wish she , and others like her had as much zeal in addressing the needs of the country's citizens. How many ways does it have to cast before she gets the idea? Unless she believes that would have restricted access to 300,000 Obama voters in Wi., That part is okay as long as her guy wins. How did this moron get elected Senator? She doesn't even see how sinister she broadcasts about herself.
I don't know what the margin of victory was in Wisconsin, but maybe Sen. Darling is right; maybe disenfranchising the "300,000 people in the state [who] do not have the forms of ID required under the law and would have a difficult time getting one" would have been just what was needed to bring about a different result--a fraudulent one in a different sense.