CMD asks Wisconsin Candidates: What Would You Do About ALEC? | PR Watch

CMD asks Wisconsin Candidates: What Would You Do About ALEC?

The Center for Media Democracy contacted Governor Scott Walker and the four candidates who have filed to run in the recall election against him. We asked them all to comment on the influence of the American Legislative Exchange Council (ALEC) on the state of Wisconsin and what they might do about it as governor.

Three Democrats and one Independent have announced that they are running against Governor Walker; a primary is likely May 8. There is speculation that other candidates may still announce their intentions to run. The general election is expected to be June 5.

Governor Walker did not respond to our request, but the other candidates did. Below we reprint their comments in full.

The way for our next governor to move Wisconsin should include a return to the Wisconsin Idea. The Wisconsin Idea was based on the premise that government was most effective when controlled by voters, not special interests. In turn, the University of Wisconsin was utilized, providing ideas most of us now take for granted, including workers' compensation, child labor laws, forest and water conservation.

Today, there are those who think our government is best served when controlled by special interests and corporations. Do we want a state and a country of the corporation, by the corporation and for the corporation? I certainly don't, and I don't think the people of Wisconsin do either.

Let's renew the Wisconsin Idea, using the best ideas from all our institutions, with the control ultimately in the hands of citizens. And let's make it as easy as possible for all citizens of Wisconsin to vote.

Contrary to what our current governor says, Wisconsin is not broke. Wisconsin has abundant natural and human resources as well as financial wealth.

Our taxes, the money we all contribute for services, should be fair and equitable. Wisconsin citizens don't mind paying for police and fire protection, for good roads, mass transit and education if the tax system is fair. Much of our current infrastructure of roads and bridges and water treatment facilities are in need of repair. Let's get to work and revitalize them for us as well as the next generation. Agriculture and tourism, to name just two industries that provide jobs in our state, depend on good infrastructure.

Wisconsin had an outstanding school system for decades. Yet the current administration has slashed millions from education. We should be investing in education, from k-12 to our universities and technical colleges.

I would utilize the resources of the university and Center On Wisconsin Strategy [COWS] to develop programs and policies to move our state forward -- a renewed Wisconsin Idea.

That doesn't mean other states don't have good ideas. The Democrats and Republicans in the state of Oregon recently passed a new health-care plan designed by Gov. Kitzhaber who is also a physician. His bold plan promises to save millions, yet provide health care to those people who can't otherwise afford it. Like many of Wisconsin's ideas that were later adopted around the country, Oregon's plan could become a model for other states, including Wisconsin. 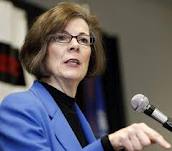 Governor Scott Walker is synonymous with the turmoil and division in Wisconsin, but ALEC might just as well be the first name in Wisconsin political tumult.

The way he was dishonest about his policy intentions while running for governor. The way he turned an alleged budget shortfall into an excuse to strip away the rights of 175,000 workers -- rights enjoyed and respected in Wisconsin by Republican and Democratic governors for half a century.

But as we all know -- thanks to the public service investigation and journalism by the Center for Media and Democracy -- Governor Walker may be calling the shots on the field of play, but it's the corporate forces behind the American Legislative Exchange Council, who are drawing up the Xs and Os on the chalkboard and calling in the plays to Governor Walker.

From his days as a state legislator, Scott Walker has been playing on ALEC's team, while the people of Wisconsin have been paying the price.

As the chair of the state's Assembly Corrections Committee, Walker pushed for legislation that would necessitate the need for more prisons, including private ones, such as ones run by the Corrections Corporation of America.

Legislation he helped marshal through is why despite similar demographics, populations and crime rates to our neighbor Minnesota, our prison spending and population exploded, while Minnesota's remained stable. In fact, Wisconsin's corrections budget grew by 550 percent in 1990s, more than double the next closest state, Pennsylvania, whose corrections budget grew by 275 percent.

And where did Governor Walker learn his love for prison spending?

During his time in the state legislature, Walker was a member of ALEC. The Corrections Corporation of America was coincidentally, a member of ALEC's "Criminal Justice Task Force."

Since becoming governor, Walker has signed into law numerous ALEC-inspired bills, everything from removing corporate accountability in Wisconsin courtrooms, to stripping public schools of badly needed revenue in favor of unaccountable private enterprises, to restricting the rights of voters, to tax policy which leaves Wisconsinites paying the bills for out-of-state corporations to avoid their responsibility to Wisconsin taxpayers.

These are not the values of Wisconsin's citizens. The passage of ALEC's agenda is in large part why Governor Walker is being recalled.

As governor, I will reject ALEC's agenda, and focus back on what the needs of Wisconsin's middle class: education, health care, clean air and water, family supporting jobs, workers rights and protecting the right to vote.

That's the agenda I'm putting my name behind.

I support the recent attempt by the Wisconsin Assembly Democrats to ban the use of state resources to pay for membership in ALEC. I also support efforts to bring transparency to the legislative process to allow citizens and journalists to be able to compare ALEC 'model legislation' with legislation introduced into the Wisconsin Legislature.

I also support additional resources to the Wisconsin Legislative Council to allow Legislative attorneys the ability to research the origin of legislation as they prepare nonpartisan memos to advise legislators and inform journalists and citizens.

While we cannot eliminate presence of ALEC in Wisconsin we can certainly ban the use of state funds for membership and expose the insidious process of corporate attorneys drafting legislation for use in multiple states for the benefit of a few at the cost of many.

I do not have any pre-conceived notions about any organization or any a priori opinions as such of anybody or any entity, and thus of any idea depending on the source. It is my principle that I weigh each issue on its own merit, regardless where it emanates from. For example, I disagree with the voter ID law because I believe the disenfranchisement potential of citizens who may have meager means far outweighs the benefit of prevention of voter fraud. I believe the right to vote is a fundamental right in a democracy and should not be taken away. My opinion in this regard would have remained the same had the law been conceived by another party. However, I would not rule out that a good idea can derive from an entity or person with whom I disagree with on other occasions.

As governor, I will expect all organizations, entities, persons to obey the law of the land-without exception. As such, no person or entity will be expected to follow the law more or less than anybody else including the government.

While I certainly enjoy the comments made here about ALEC, I find it hard to believe that WMC is never mentioned. ALEC is a powerful and vastly resourced national organization. If we're serious about taking on special interests, let's talk about the authors of the 'Budget Repair Bill' 4 blocks off the Capitol square. Let's talk to the self proclaimed 'voice of business in Wisconsin' and tell them that they are not the only voice that needs to be heard. Making money is not the only thing we care about. Making money is the only endeavor Wisconsin Manufactures and Commerce has ever perused. Lest we forget, WMC wrote that bill. They bought and paid for Walker. While it may be easy to misconstrue the opposition of WMC as an attack on 'Job-creators' and small business (the usual GOP mantra), membership in WMC is cost-prohibitive to the real entrepreneurs in our community. While their membership is kept secret, their cash flow suggests corporate sellouts and out of state influence. The candidates need to take a hard line on this issue. Hundreds of thousands of people marched in the streets and Capitol of this state in strong opposition to WMC's ramrod tactics and 'heads we win, tails you loose' mentality. Those citizens will vote for whomsoever caries that fight to the Governor's office. Sure it's risky, but who can resist the magnetic attraction of a bold candidate unwilling to back down in defense of our great state. These people are made heroes. That's Fighting Bob, that's Wisconsin.
Your comment is right-on! Think about the last-minute media blitz that deep-sixed allowing other than property taxes to be used to support schools. Think about the unqualified people they've boosted onto the State Supreme court. They constantly attack the provision of social services and demonize those receiving such services. They definitely don't support small businesses - and small businesses are the greatest job-creators in Wisconsin.