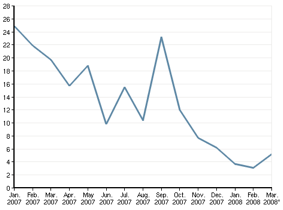 Not surprisingly, public knowledge of what is actually happening in Iraq has suffered as well. "Public awareness of the number of American military fatalities in Iraq has declined sharply since last August," reported a recent survey by the Pew Research Center. Only 28 percent of respondents correctly said that about 4,000 Americans have died in the war. Most thought the number was closer to 2,000 or 3,000.

A total of 4,503 Americans have been killed in Iraq and Afghanistan (a figure that does not include employees of private military contractors), while studies of the number of Iraqis who have died have produced estimates ranging from 400,000 to more than a million. 31,187 US soldiers have been wounded overseas. The Pentagon says an additional 9,984 have been injured, and 27,890 have been evacuated after falling ill on the battlefield. Nearly 300,000 Iraq and Afghanistan war veterans have gone to the Department of Veterans Affairs for treatment; 250,000 have filed a disability claim with the VA.

Behind each of these numbers, of course, there is a human story. Combined, they tell us that the war in Iraq is one of the most pressing problems confronting the United States. Tragically, the beginning of the fifth year of this war appears to have brought us back where we started in terms of public scrutiny, with a cowed media and distracted citizens either blindly following the spin coming from the White House, or worse, simply ignoring one of the most important issues of our day.

Sheldon Rampton is research director at the Center for Media and Democracy and the co-author, with John Stauber, of books including Weapons of Mass Deception: The Uses of Propaganda in Bush's War on Iraq and The Best War Ever: Lies, Damned Lies, and the Mess in Iraq.

Another thing the mainstream media pretty much ignore, according to Robert Scheer writing in Truthdig, is astronomical sums spent on useless weapons systems: <blockquote><strong>A Submarine to Fight al-Qaida’s Navy</strong> By Robert Scheer A trillion dollars here, a trillion dollars there, and soon you’re talking real money. But when it comes to reporting on what the Bush war legacy has cost American taxpayers, the media have been shockingly indifferent to the highest run-up in military spending since World War II. Even the devastating defense spending audit released Monday by the Government Accountability Office documenting the enormous waste in every single U.S. advanced weapons system failed to provoke the outrage it, and five equally scathing previous annual audits, deserved. [...] </blockquote> http://www.truthdig.com/report/item/20080401_a_submarine_to_fight_al_qaidas_navy/ Or who knows, maybe the men behind the curtain are planning a war we can't ignore, one that will put all these expensive toys to their fullest use.
The anti-American dems have always been what the enemies need. About 1 decade ago, Israel launched an air attack against a Sadam's NUCLEAR REACTOR. There still the ruins as a silent monument of SADAM's WMD PLANS to any self-programmed anti-American, and as a proove of the war on terror. Also, Sadam was the Hugo Chavez on the region, paying (not sure the ammount) like $30,000 for the family of any suicide bomber against Israel or any other "enemy" of the terrorists. I can't believe there still terror logistics in situ USA saying Sadam wasn't related to terror on the region. The terrorists even fight between them for oil power, that's why Iran and Irak whent to war for 10 years, and became friends on 2003 "suddently" (Iran kept Sadam's air force for protection), they fight, they reconciliate, they are terrorists).
<blockquote>About 1 decade ago, Israel launched an air attack against a Sadam's NUCLEAR REACTOR. </blockquote> It happened in 1981, more than two decades ago. Saddam Hussein may well have meant to acquire nuclear weapons back then, but by the time the U.S. invaded Iraq in 2003 the program had been long dead. In fact, both Condoleezza Rice and Colin Powell stated publicly in 2001, before the 9/11 attacks gave the American warmongers the excuse they'd been waiting for to invade Iraq, that Saddam had been contained and posed little threat to the region. <blockquote>Also, Sadam was the Hugo Chavez on the region, paying (not sure the ammount) like $30,000 for the family of any suicide bomber against Israel or any other "enemy" of the terrorists.</blockquote> Do you have any evidence that Hugo Chavez has ever paid money to suicide bombers or done anything else like that?
terrorist are not only suiciders like Mohamed Atta, Latino terrorists are "not yet suiciders", they "only cut your head off, but if you allow develop their plans with Chavez and the rest of the Iran, Sadam, Siria, etc. publicly declared friends, just wait... a litle time..., click... click... click...
1981 Israel bombing to Sadam's nuclear reactor?, better for my point. If that hasn't happend, not only Israel, but many other countries Sadam attacked (or invaded for oil like Kuwait, even Europe) would be ereased by now, and with them the civilization allies on the region who still face (bravely, as US/allied soldiers) and fight terror (Iran, Chavez's, Castro's super friend) repeats will nuke Israel, Europe, and anywhere once has "the bomb". About Chavez and suicide bombers, you should thank God (if you bilieve exists) latinos are not siuciders yet (at this time "we" have only "simple" terrorists, like Colombian terrorist guerrilla FARC, ELN. By the way, ask about the people taken by FARC, ask about former Presidential candidate Ingrid Betancourt and their fate, globaly known at the time. Learn about last Colombian army strike to #2 Raul Reyes, "and his 3 fully documented PCs, with plenty info about Chavez and other "future evil terrorist countries" south of USA. Remember, most of the 9-11 pilots where in situ USA, protected and covered, and ignored by thinking terrorists are only middle east suiciders, and "far and away", and "they won't attack USA without provocation"
http://www.gregpalast.com/300-million-from-chavez-to-farc-a-fake/#more-1976 Enjoy! :-)
Isn't this exactly what the Bush Administration wants? It doesn't really want people paying attention. Recognizing the actual cost, both monetary and human, might cause support for the war to wane even more. It might cause the GOP to suffer an even bigger defeat in the next election, despite the Dems impotentance since gaining a majority in Congress.